“I didn’t know she was dating a black boy, did you?” 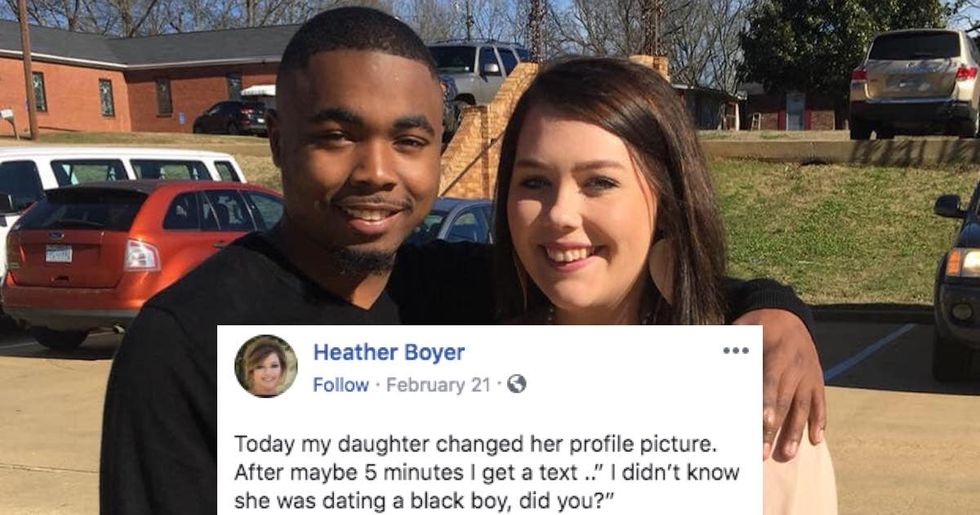 In a viral Facebook post, a mom responded to a text from a schmuck implying that it was bad that her daughter was dating a black man, in a glimpse at what would be all over Facebook if the website had existed in the 1950s (or 1800s).

Heather Boyer, a mom in Houston, Mississippi, shared an adorable picture of her daughter smiling with her boyfriend, and while most people were happy for their happiness, some person decided to text Boyer, “I didn’t know she was dating a black boy, did you?”

Boyer was understandably stunned, and rather than respond to the text individually, she wrote a public post for every racist still clutching their pearls over inter-racial relationships.

“The color of his skin doesn’t define who he is. What does define who is he is how he treats my daughter,” Boyer wrote, and also listed ways in which the “black boy” is the best boyfriend.

Today my daughter changed her profile picture. After maybe 5 minutes I get a text .. “I didn’t know she was dating a black boy, did you?”

It took me all day to think up a response, which I didn’t send personally but thought I would share for anyone else that “may not know”

Yes in fact I did know, but the color of his skin doesn’t define who he is. What does define who is he is how he treats my daughter.
I see my daughter dating a boy that comes to my house and shows me nothing but respect (a big deal in my book). It’s always Yes Ma’am, No Ma’am, we talk about football and baseball, he tells me bye when he leaves, and has not once shown me a lack of manners or respect.

I see my daughter dating a boy who treats her good. He takes her on dates, to ballgames, out to eat..not to a club or partying on the weekends.

I see my daughter dating a boy who takes her to church with him. Every Sunday. He plays in the band, she sits with his family. How many young men these days make church a priority? None of the others have.

He doesn’t hit her, cuss her, lie to her, or make her cry. Would I rather her date a white boy that did, to keep from her dating another race? Absolutely not.

So that’s my response to the question I was asked. And I know people have their own opinion, but at the end of the day, the fact that my daughter has someone that loves her and treats her like a queen makes me happy. That’s something I’ve never had in my life and I’m glad she does.

Among the 80,000 comments, people shared stories of the interracial couples in their lives.

Being racist, however, is hugely shameful. If you see someone you know dating a racist, it is important you text them about it.