Eat more and get fit. 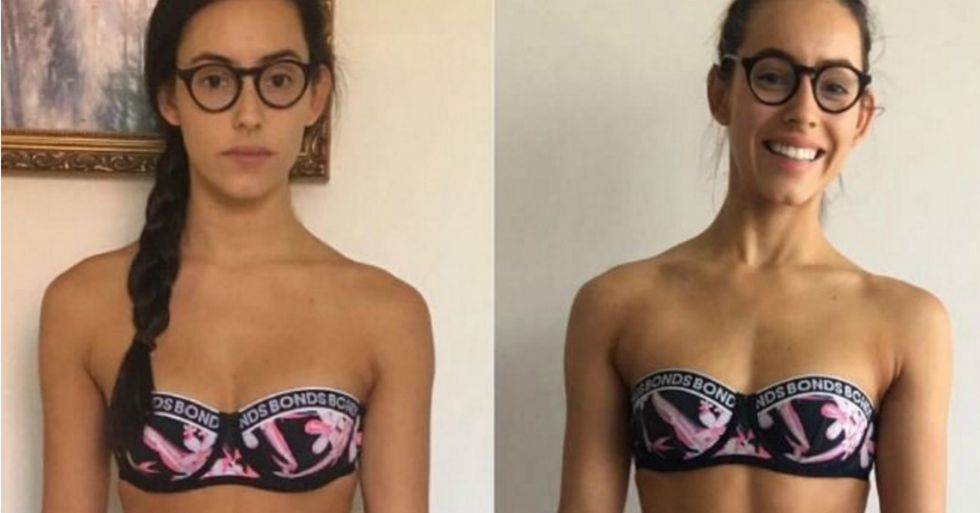 The common sense theory to weight loss has always been: burn more calories than you consume. You can either eat less high-calorie food or exercise enough to counteract what you eat. To prove that this oft-repeated theory is actually a major misconception, Instagram-user Madalin Frodsham posted side-by-side photos of when she ate 800 calories a day versus 1800. When Frodsham stopped restricting her caloric intake, she had a thinner and more toned body and, most importantly, she was able to enjoy eating again.

Frodsham’s post is not only encouraging to people who are tired of starving themselves, but it also sheds light on a major weight-loss misconception. Calorie restriction doesn’t always equal weight loss. Researchers from the National Institute of Diabetes and Digestive and Kidney Disease released a report in 2012 saying that calorie restriction isn’t the best way to lose weight because it doesn’t take metabolism into account.

“People have used this rule of thumb to predict how much weight people should lose for decades now, but it turns out to be incredibly wrong,” Kevin Hall from the NIDDK said. “The reason it’s wrong is because it doesn’t account for the metabolic changes that take place when people change their diet. We know that if you cut the calories in somebody’s diet their metabolism starts to slow down, and it slows down more and more the more weight that is lost. So eventually you’ll reach a plateau.”

When these metabolic changes occur, the body goes into what’s known as “starvation mode.” Now, instead of burning calories, the body begins to store them as fat. Madalin Frodsham was able to increase her caloric intake and lose weight by eating the correct balance of macronutrients (carbs, fats, and proteins). “So I got in touch with a [physical trainer] and nutritional coach and got my macros sorted,” she wrote on her Instagram post. “When he first told me to eat 50 percent carbs I nearly died! I was eating about 10 percent carbs before and could not fathom how 50 percent carbs would not make me fat.”

“Let’s just preface this by saying no, I did not have an ED. When I was eating 800 calories a day, I thought I was healthy. I was eating healthy food, but hardly any macronutrients. I was curious to find out what my macros were like before I actually started counting my macros, so I entered my old foods into @myfitnesspal to find out. I was quiet astonished to see how little protein and carbs I was eating. 800 calories seems absurdly low as now I need minimum 1500 calories to be full, but at the time 800 calories was keeping me full because that's what my body was used to. After a while though, salad simply wasn't cutting it, and for all the restrictions I was placing on my diet, I simply wasn’t seeing the results I had anticipated. So I got in touch with a PT and nutritional coach and got my macros sorted. When he first told me to eat 50% carbs I nearly died! I was eating about 10% carbs before and could not fathom how 50% carbs would not make me fat. I also freaked out at all the calories. I've been keeping an excel spreadsheet and in the first week of being on macros my average calories for the week was a little over 1000. I remember how hard I struggled to actually eat the size of my meals. I would just put my lunch next to my desk and eat it over the course of 3 hours as I couldn't eat it in one sitting! Now my stomach can take way more and is much happier! In the second week I was averaging 1600 calories a day! It didn't take long for my body to catch up. A part of me may always have that mindset that relates not eating with weight loss and ‘being good today’. Sometimes I may forget to eat lunch just because I got busy and for a second I will revert back to old thinking, and think ‘ohh, I’ve done really well today and haven't eaten much at all.’ That's why I love tracking my macros. It will tell me ‘Maddy, you need to eat more. Go eat 3 potatoes’. And I’ll pat myself on the back for being healthy and doing really good today! If you're under feeding yourself in an effort to lose weight, don't do what I did for so long. Don’t waste your time eating salad when you could be eating sweet potatoes and banana pancakes. Eat more and get fit. It actually works”

Madalin Frodsham’s results are based on her specific body type and metabolism. Please consult a physician before attempting this diet yourself.