An unmarried teacher respected her Catholic school’s beliefs. They responded by firing her for getting pregnant.

She didn’t get an abortion or use contraception. But she is losing her job. 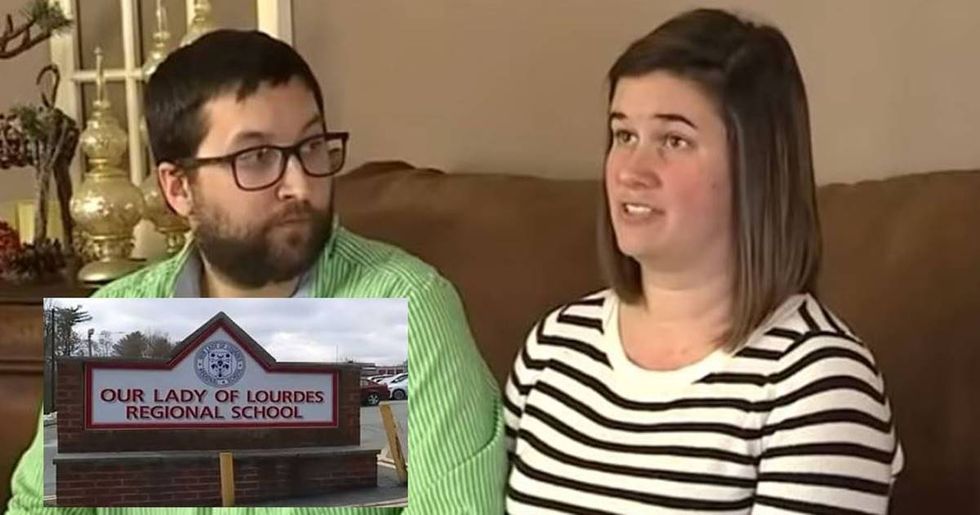 High school teacher Naiad Reich was fired from her job recently. It wasn’t because her students had low test scores or were undisciplined. It was because she is unmarried and pregnant.

Getting fired for being pregnant would never fly at a public school, but Reich taught at Our Lady of Lourdes Regional School, a Catholic institution near Shamokin, Pennsylvania. The school has a strict morality clause that forbids unmarried employees from becoming pregnant.

“This is their beliefs and their moral code and what they live by and I understand that. Though I don’t agree with it, I understand,” Reich told WNEP. “If there’s no eventual plan in the near future to get married, it was either that or I had to be let go.”

Reich said that she and her boyfriend, Matt Graboski, prefer to get married on their own terms.

The Diocese of Harrisburg released a brief statement on the firing.

“The Diocese of Harrisburg is unable to comment on personnel matters,” a spokesperson for the diocese said. “However, as outlined in our policies, every professional employee agrees to follow the teachings, doctrine, and laws of the Catholic Church as part of the hiring process.”

According to Core Christianity, there are nine verses in The Bible that forbid people from having sex before marriage. So it’s understandable that a Catholic institution would frown upon an unmarried, pregnant employee.

But there are over two dozen verses in The Bible that talk about the power of forgiveness. So maybe the Diocese of Harrisburg should have taken a look at that part of the book as well?

“Be kind and compassionate to one another, forgiving each other, just as in Christ God forgave you.” — Ephesians 4:32

It’s also interesting that the Catholic church took such swift action against a pregnant woman, when it has a long history of covering up the misdeeds of men.

Reich’s firing ignited an intense on Twitter. Some people found it ironic that the pro-life Catholic Church would punish woman who decided to keep her baby. While others side with the church, saying that Reich knew about the morals clause before making the decision to get pregnant.

The Catholic Church, more concerned with upholding their puritanical, backwards, hypocritical “values”, than the livelihood of a quality teacher providing a significant benefit to students.

I guess the fact that she didn't have an abortion carries no weight...what a sham. Churches, all churches, need to think deeply and well before they act. I hope some wonderful opportunity comes for her because of this!

Unmarried pregnant teacher fired from Catholic school. Catholics urge women who are unmarried and pregnant not to have an abortion, but they will fire them from their jobs so that they can't support their baby. Makes complete sense #ProBirth #NotProLife https://t.co/Y1D9hMb4rY pic.twitter.com/e6y4aKD61x

If you support a teacher getting fired because she became pregnant out of wedlock, you are not pro-life.

Huh, that settles that then. I vaguely seem to remember that Mary and Joseph weren't exactly married either. Which would make Jesus what exactly? Ah yes, not a Catholic.

You work at a private Catholic school.... Learn their rules..

What did she think would happen? Lol... The Catholics don't want someone who goes against what they believe.

Why do people apply for jobs at faith based schools, sign contracts that include a religious morality clause & then run to the news when they get fired for breaking that clause?

Teacher fired by Catholic school for getting pregnant out of wedlock https://t.co/k0F3KDFZZo pic.twitter.com/QoNldfkFEK

Its the laws of the Catholic diocese. All of the teachers, principals, food works etc. follow the same laws and rules which is you cannot be pregnant and unmarried. She told them she wasnt planning on getting married to him anytime soon so she got the boot. She want even Catholic