Last year, Trump stole a golf ball from a man’s son to ‘win’ a championship on his own course.

Our president is so petty he steals golf balls from people’s kids. 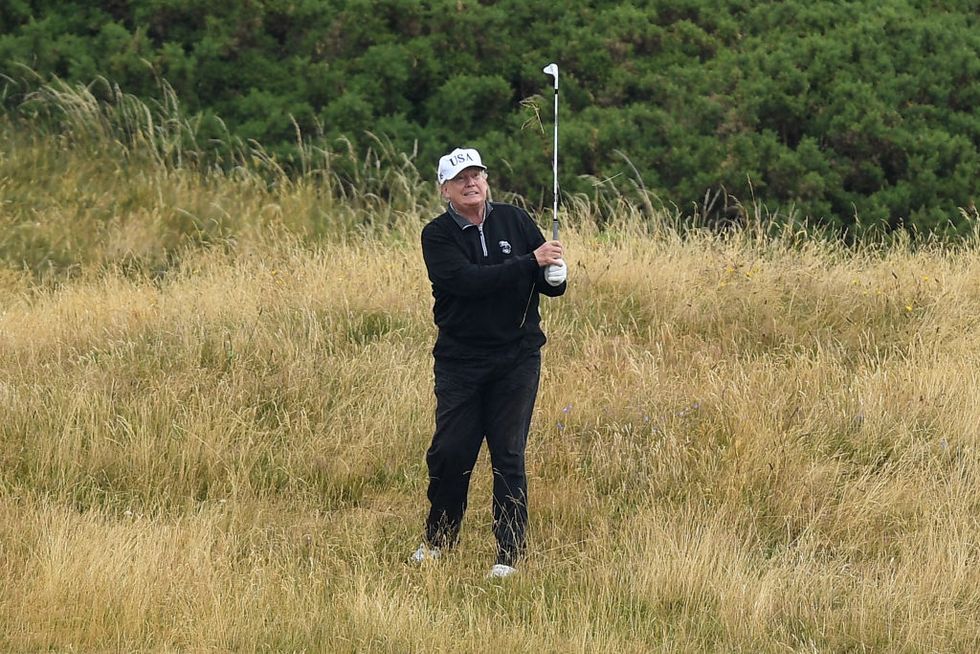 How bad a cheat is President Trump? One of the nation’s best sports reporters needed an entire book “Commander In Cheat,” just to chronicle Trump’s legendary record of cheating in golf alone.

But there’s one story that has exploded in the press this week because in a way it captures everything about Trump’s divisive and shady dealings into one compact metaphor.

Trump owns over a dozen golf courses around the world. He’s claimed to have won a “championship” at every single one of them.

According to journalist Rick Reilly, Trump is such an insecure cheat that when he purchases or opens a new course, he plays a round by himself (usually with Melania and young Barron in tow) then declares himself the “winner” of the course’s inaugural championship.

So, in 2018, Trump was furious when film producer Ted Virtue claimed the championship at the Trump International course in Florida. See, when he’s not busy cheating at golf games, Trump has this other job being president of the United States. And that distracting occupation had him meeting with North Korean dictator Kim Jong Un.

Furious that he’d given up his course’s championship, Trump confronted Virtue on the 12th hole. Even though the actual championship had already taken place, Trump insisted that Virtue wasn’t really the winner because Trump hadn’t been attendance, presumably able to cheat and steal victory from the clutches of an actual player. In an interview with Vox, Reilly describes the almost surreal interaction that then took place:

Ted tries to laugh it off, but Trump is dead serious. Trump says, "We're gonna play these last six holes for the championship." And Ted's like, "Oh, well, I'm playing with my son, but thanks anyway." But Trump says, "It's okay. Your son can play, too." So what are you going to do? He's the president. It's his course. They end up playing.

Apparently, they get to a hole with a big pond in front of the green. Both Ted and his son hit the ball on the green, but Trump hits his in the water. By the time they get to the hole, though, Trump is lining up the son's ball. Only now it's his ball and the caddie has switched it.

The son is like, "That's my ball!" But Trump's caddie goes, "No, this is the president's ball; your ball went in the water." Ted and his son look at each other confused, not sure if this is really happening.

Initially, Reilly incorrectly claimed that Virtue’s son was only 10 or 11-years-old, which made the story sound exponentially more comically twisted. Instead, it turns out his son is “at least” in his 20’s.

Nonetheless, it’s absolutely bizarre and absurd. Imagine you are playing a friendly game of golf with your Dad, the president of the United States shows up demanding “justice” and when he sinks a ball into the drink, steals your ball in a futile attempt to claim victory.

Look, every president is an ego-maniac. You don’t run for political office from a place of humility. But this is some next level stuff. And it truly explains everything about Trump’s distorted worldview in one neat little anecdote.

The president is a cheater. The president doesn’t care about rules or decency. The president will steal a ball from a man’s son in order to claim victory. And that person is currently the leader of the free world. Can’t we just take a collective mulligan?