When addressing the Mueller probe, he claimed Article II gives him unlimited power. 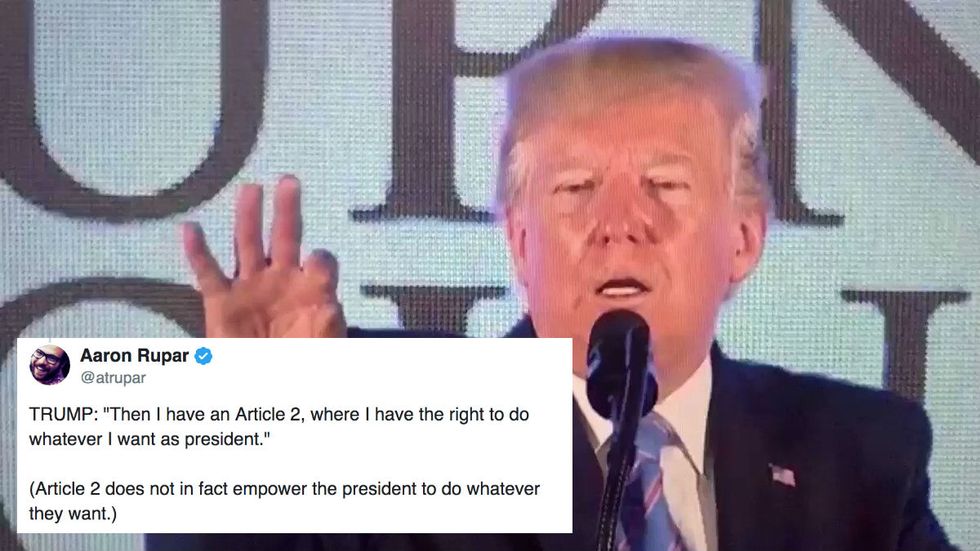 In Tim Alberta’s upcoming book, “American Carnage: On the Front Lines of the Republican Civil War and the Rise of President Trump,” former Speaker of the House, Republican Paul Ryan admits that Donald Trump “didn’t know anything about government.”

During his speech, Trump went on a rant against Robert Mueller’s investigation into Russian interference in the 2016 election, calling it a “witch hunt.” He then made an audaciously false claim about the Constitution.

“I have an Article II, where I have to the right to do whatever I want as president,” he said. “But, I don’t even talk about that because they did a report and there was no obstruction.”

However, Article II of the Constitution says nothing about giving the President of the United States unlimited power. The first section outlines how the president is elected and compensated. The second explains his basic powers, including granting pardons, making treaties, appointments, and serving as Commander-in-Chief. Section three says the president is responsible for providing Congress with the State of the Union.

The final section, which should be of greater importance to Democrats, explains how he can be impeached.

Trump’s grossly inaccurate description of the Constitution to a group of teens wasn’t just a verbal misstep; he’s said the same thing before, also in the context of the Mueller investigation.

In a June interview with ABC News, Trump said, “Article II allows me to do whatever I want. Article II would have allowed me to fire [Mueller].”

A recent study published in Vox found Trump has been very successful at pushing Republican voters to abandon traditional Republicans on a host of issues, including free trade, overspending, and the size of government. He also has a history of making audacious statements as trial balloons to see if his supporters will go along with them.

Could it be that his assertion that the Constitution grants him unlimited power is a way for him to push for greater executive authority? Or is it, as Paul Rayn would say, simply Trump once again being uneducated about the government?