Trump Spokesperson Has An Epic Meltdown On CNN

It’s impossible to defend the guy. 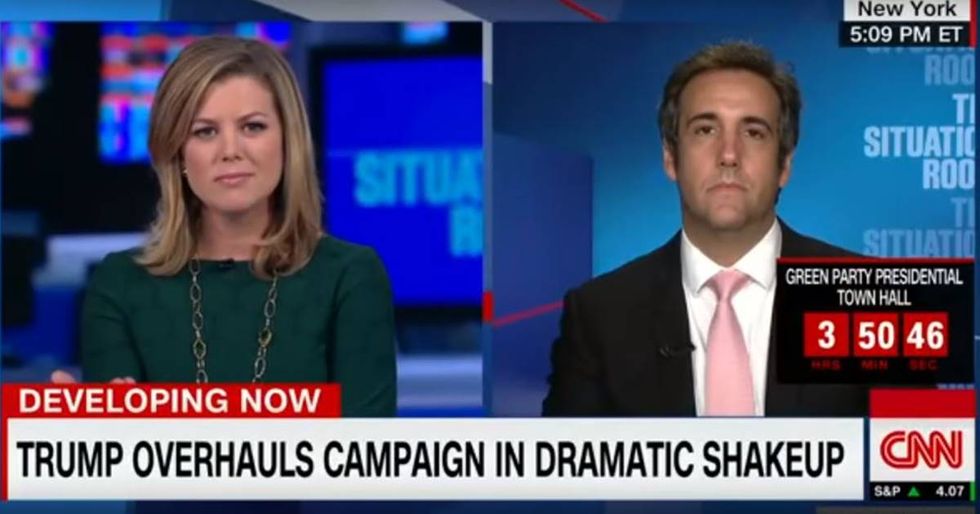 Being a spokesperson for the Trump campaign is not an easy job. Night after night you have to pop up on cable news shows and defend Trump’s antics whether he just mocked a Gold Star military family, claimed that Barack Obama created ISIS, or believes the election is rigged. It gets even harder when you have deny the polling numbers that show Trump is losing by a wide margin nationally, and in most swing states. All of this spin must have caught up with top Trump advisor Michael Cohen today when he had a complete meltdown while speaking with CNN’s Brianna Keilar.

In the clip above, Cohen is asked by Keilar about the recent staff changes the Trump campaign has made to address its major slide in the polls. “You say it’s not a shakeup, but you guys are down,” Keilar says. “Says who?” Cohen responded with righteous indignation. “Most of them. All of them,” Keilar replied without an ounce of hyperbole. Then Cohen must have suffered through the longest four seconds in his life while he waited for the right words to pop up in his brain. But all he could do was repeat his last question: “Says who?” Keilar looked shocked and responded by repeating herself: “Polls,” she said. “I just told you. I answered your question.”