“I’d ask whether or not you think I will someday be on Mount Rushmore.” 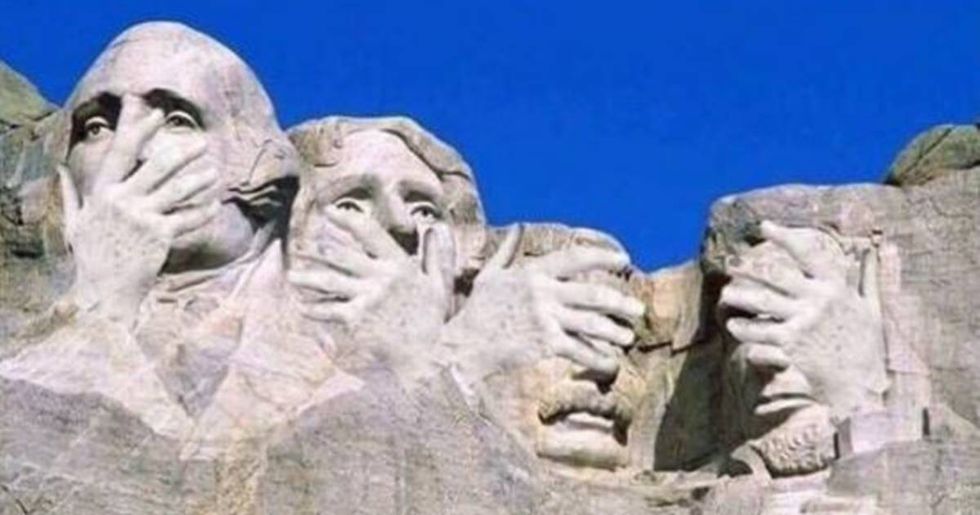 At a rally Tuesday night in Youngstown, Ohio, President Trump made a joke about one day having his face inscribed alongside Presidents George Washington, Thomas Jefferson, Theodore Roosevelt, and Abraham Lincoln on Mount Rushmore. “I’d ask whether or not you think I will someday be on Mount Rushmore, but, no — here’s the problem: If I did it joking, totally joking, having fun, the fake-news media will say, ‘He believes he should be on Mount Rushmore!’ ” Trump said. “So I won’t say it, OK? I won’t say.”

Trump would have to do a massive turnaround to join the ranks of America’s most highly regarded presidents. In six months, he has zero major legislative achievements and the lowest approval rating at this point in his term since the polls began 70 years ago. So when Trump suggested he may end up on Mount Rushmore, Twitter had a blast Photoshopping him onto the monument.

Plans for Trump's new Mount Rushmore have been released. pic.twitter.com/AcCEz63MKf

Trump invokes idea of his face on Mt. Rushmore.

So Trump wants his face on Mount Rushmore & my grandma just said "why doesn't someone just leave him up there, then he's not our problem"

OH: Trump wants his face on Mt. Rushmore and Canada is gonna pay for it.