Here’s What Happens When Child Brides Go to School

With the support of an educational project, Indian girls are finding a way to realize their dreams. #projectliteracy 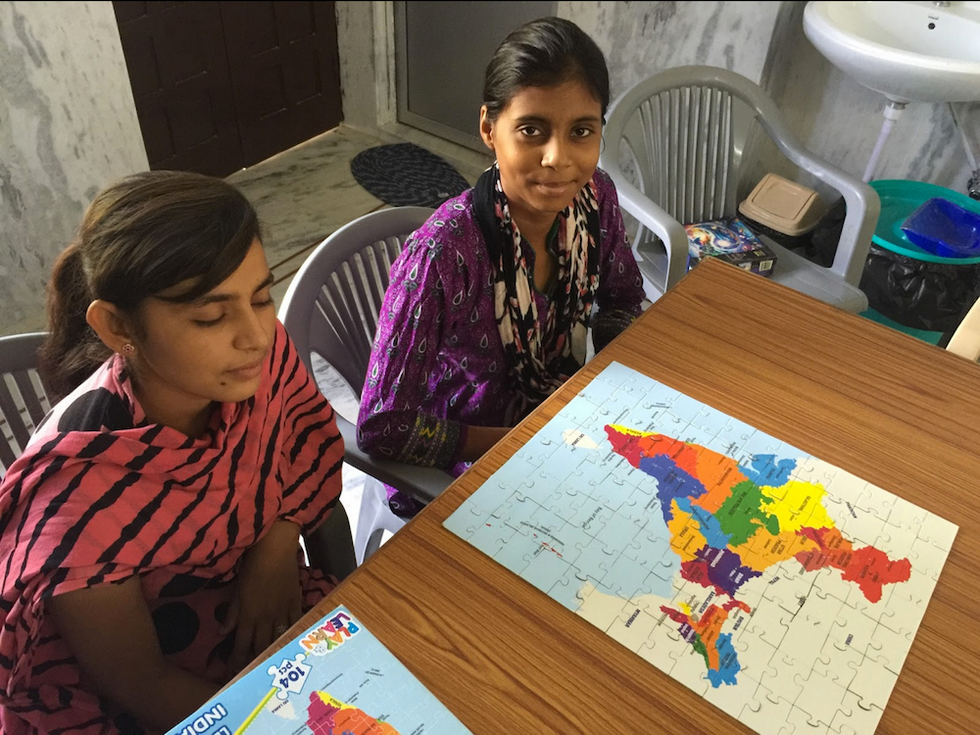 This story is part of an ongoing campaign called the Alphabet of Illiteracy. By using letters themselves—the foundation of reading and writing—Project Literacy examines the ways illiteracy underpins some of the greatest challenges facing the world today. Below, we explore the letter C for “child brides.”

Shanno*, a chirpy 15-year-old 10th grader, is nervous about her upcoming board examination. If she does well, she’ll be on her way to fulfilling her dream of becoming a bank manager one day.

But just a few years ago, Shanno would never have presumed to hold such ambitions. She didn’t even know if she’d be able to receive a secondary education. Like many other villages near Jodhpur, a city in the western Indian state of Rajasthan, the hamlet she calls home—Meghwalon Ki Dhani—has only a single government primary school, which Shanno describes as being below standard. “I could not read much or do math even after passing grade five,” she says. After attempting to continue her education for another year in a nearby village, she was forced to quit school because it was too dangerous to walk so many miles every day with only her friends to keep her company.

Shanno is a child bride who was married at the age of 10, along with her two sisters. That isn’t unusual in Rajasthan, where young girls can be married at any age, even when they are one or two years old—though traditionally, child brides are not sent to live with their husbands until the age of 14 or 15. But if, like Shanno, they are unable to attend school, prospective in-laws often insist they move in with their husbands sooner to serve as household help. Parents often feel they have no choice but to give in, if only because there will be one less mouth to feed.

Rajasthan holds the poorest literacy rate for women in the world—just 53 percent, according to the 2011 census, way below India’s national average of 74 percent—and a likely reason why child brides are so common there. According to UNICEF, the combination of child marriages and illiteracy results from and helps to perpetuate poverty. Women with no education are six times more likely to marry as children than those with 10 years or more education. Although it is indeed the case that “child brides can be found in every region in the world, from the Middle East to Latin America, South Asia to Europe,” according to Girls Not Brides, the practice is endemic to Rajasthan. Between 2007 and 2009, nearly 22 percent of marriages there took place when the bride was below the legal age of 18.

When she dropped out of school after grade six, Shanno experienced a great deal of pressure to live with her husband and her in-laws. If she wanted to avoid an early life as a housewife before she reached her teens, she had to find a way to pursue her education. And that’s where Veerni Project came in. This NGO in Jodhpur provided her with a solution, as it does for many child brides in the region. At the age of 12, Shanno took up residence at the Veerni Institute, the nonprofit’s hostel and the only institute of its kind in Rajasthan, offering secondary (grade six and above) and university education for child brides at no cost to their families.

The institute, which offers co-curricular activities like computer science, sports, and arts and crafts, sends all 70 of its residents to an above-standard private school. Every evening, girls are able to attend extra classes in any subjects they might struggle with, as well as lectures on legal rights. In addition, the institute pays for their meals and healthcare, spending approximately $1,520 on each child every year. Over the last decade, nearly 100 residents of the institute have completed grade 12; 69 have gone on to finish college.

The Veerni Project began its work by starting a literacy center for girls in each village that it adopted, to supplement education at government schools. “But it was difficult to get teachers from the city on a regular basis, so we didn’t get the results we wanted,” says Mahendra Sharma, director of the institute.

So Veerni Institute opened in the city of Jodhpur in 2005. The first year was difficult, with only 39 girls filling 60 available seats. But over the years, parents started seeing an advantage in admitting their daughters. “Many of our graduates have been working in schools and colleges around their villages or in cities and are actively contributing their income at home,” Sharma explains, adding that last year, the institute received 209 applications for four vacancies.

Veerni’s literacy centers are still running, but only to prepare interested students for an entrance test at the institute. However, the selection criteria for students are much more intensive. With a focus on educating girls, Veerni Institute scouts potential students in the area by keeping an eye out for those who are most vulnerable. Besides the child brides enrolled at the institute, many of its students were selected before marriage entered the equation—for example, because they were so poor that they didn’t receive three square meals at home. “We also have a few girls who were about to be thrown into prostitution before we found them,” Sharma says. “They are now doing very well at school.”

He notes that “when we started the institute, our aim was to delay the age at which a child bride is sent to her in-laws’ residence.” By the time a girl graduates from Veerni Institute, she is 18, the legal age for marriage in India. “But in the past few years, we have seen a dramatic change in parents’ perceptions too,” he adds.

“Fewer girls were married as children in my village in the past three years,” says Shobha Choudhary, a 26-year-old who teaches at a college in Jaipur. She was married at the age of 8 and was able to study after grade 10 thanks to the institute. Upon graduation, Choudhary returned to life with her husband. He turned out to be an alcoholic who abused and beat her before she walked out on him and attempted to divorce him—a first for a woman in Rajwa, her village. The hostility of her parents and in-laws made her struggle difficult, but with the support of the institute, her divorce was finalized after only a year.

Choudhary strongly believes that education turned around her life, and is proud to say that she became a source of inspiration to every child bride in and around her village. “It’s because I had the grit to study and become independent despite all odds,” she says. “People look up to me because I talk of my rights and tell others about theirs,” she adds.

If Choudhary hears of any child marriage being planned in her village, she sends the police or the media. “Many girls in and around my village have broken their alliances. They realize that it is better to struggle now than be unhappy for the rest of their lives,” she says.

Shanno reckons that as an educated daughter-in-law, she will not be treated like a doormat. “No one will shut me up when I talk. My decisions will count,” she says. She also hopes her experience will bring about a cultural shift in her village and beyond. “I will talk to parents and little girls who don’t understand the value of education; at least some will listen.” But what makes her happiest is that her own children will never have to struggle for a good education. “I will ensure that they get the best schooling possible.”

Recently, the village head of Meghwalon Ki Dhani pledged that no girl in his hamlet would be wed before 18. He also ensured that if any girl were unhappy about her impending marriage, she would be able to call it off. “It’s a big achievement for us,” says Sharma, who remains optimistic about the future. He adds, “I think it will take just one more generation to bring about change.”