"They promise us jobs that'll pay 300 dollars per month. But we know better now and don't get lured by them." #projectliteracy 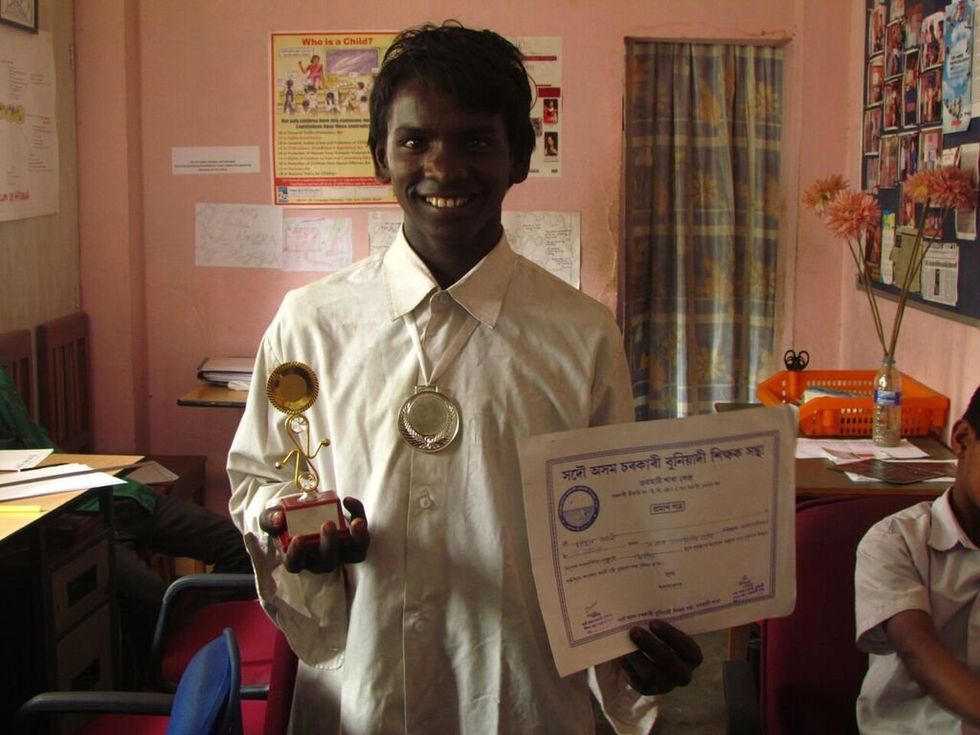 In Assam, India, 12-year-old Sahidul Ali returned from school with a big grin on his face and headed straight to the office of Universal Team for Social Action and Help (UTSAH), a local NGO. Holding a certificate and wearing a shiny medal around his neck, Ali announced that he’d finished second in a 100 meter race. He was immediately embraced in hugs and cajoled into posing for several phone cameras, including this writer’s. After spending some time narrating his victory, he walked across the road into a narrow lane and across a number of railway tracks. There, in one of the many slums in Guwahati, the largest city in Assam, lay his home.

About 200,000 people in Assam live in slums. Living in extreme poverty in a small hut made of tin and bamboo, Ali’s family is one of thousands that migrated to the city in hopes of finding better work opportunities. However, high rents forced them to occupy open spaces and live in shanties. Previously, Ali walked a long distance to attend a government school, but he wasn’t considered a bright student, and he decided to drop out after being subject to corporal punishment by teachers. Miguel Queah, the founder of UTSAH, spent three months counseling and encouraging Ali to return to school. When Ali finally agreed, Queah enrolled Ali in a different one closer to home. While Ali’s a regular student now, he confesses to picking rags sometimes for pocket money.

Sahidul Ali with the medal and certificate that he won at a 100 meter race in his new school. Photo courtesy of Sarita Santoshini.

It may seem that Ali’s greatest challenge is overcoming the extreme poverty that he and his family experience in Guwahati. However, about 40,000-44,000 children go missing in India every year, a large percentage of which remain untraced. The situation in Assam, a state in northeast India which has a long history of economic underdevelopment, ethnic violence, and annual floods, is quite grim but mostly overlooked. According to a report by the state’s Crime Investigation Department, at least 4,757 children have gone missing in Assam since 2012, with girls making up more than 57 percent of reported cases. A majority of these children have been trafficked for forced labor or sexual exploitation.

Runumi Gogoi, the Chairperson of the Assam State Commission for Protection of Child Rights, believes that one of the main factors driving child abuse and exploitation is the low 73 percent literacy rate in Assam. For women, the literacy rate is even lower at 67 percent. And nationwide, India has the highest population of illiterate adults in the world, according to a recent report by UNESCO. Gogoi believes that the high illiteracy rate, combined with the life or death stakes of poverty, often causes parents to make the wrong decisions for their children by pushing them towards labor to supplement income. According to Gogoi, the first crucial step in child protection and curbing children-related crimes is to make education accessible to all. Many local organizations share this belief and have begun working to expand education access in different parts of the state.

“Slums are looked at as dark spots, [and the] population [is viewed as] not [being] part of the developing city,” Queah said. “They’re socially marginalized, mostly illiterate and unskilled, and do not manage to get well-paying jobs. Their access to education is curbed, which leaves them vulnerable to child labour, commercial sexual exploitation, and trafficking.”

In 2012, UTSAH partnered with the SMILE Foundation to start a non-formal education program in Hafiznagar No. 2, the slum that Ali and his family live in. Children gather at an on-site center for four hours every day and learn elementary English and arts and crafts among other things. In the midst of the program’s first years, Queah discovered the work of Jyoti Kendras, an initiative by the Assam government under the national “Education for All” scheme. Their mission is to mainstream urban area out-of-school children, ages 6-14 years old, into local formal schools. A Siksha Karmi, or teacher, leads sessions with the children after their daily UTSAH classes. By January, 2016, 120 children were enrolled in government schools.

“How many non-formal centers can we set up? Instead, we decided to invigorate the state opportunities that are lying dormant. We identify the children, inform a teacher of the Jyoti Kendra, and then get the system to work for them. An evaluation is done at the end of each year and the enrollment is based on the child’s merit and after discussion with the schools,” Queah explained.

Hamida Begum, 14, also lives in Hafiznagar No. 2. She is adamant about finishing her schooling and pursuing a successful career, despite witnessing her four elder siblings dropping out of school to work and losing a cousin to trafficking. “Middle men and agents show up from time to time asking us to come along to Delhi. They promise us jobs that’ll pay 300 dollars per month. Our parents are illiterate so they tend to believe them, but we know better now and don't get lured by them,” she said.

In areas far more vulnerable to child trafficking, ensuring education becomes a much more challenging task. For example, Kokrajhar is a district that’s been affected by multiple incidents of ethnic violence since 1996, and survival is the primary struggle for the families and children living there. It is unsurprising then that this district has one of the lowest literacy rates in the state at 67 percent. There are about 900 forest encroachment villages in the district which don’t fall under government oversight and lack all basic facilities and rights, according to Digambar Narzary, the founder of the Nedan Foundation, an NGO which works to prevent exploitation of women and children in Kokrajhar.

“These villages lie close to the India-Bhutan border and trafficking from that part is extremely high. Children are taken to different states at the pretext of education and a better life, and later exploited,” Narzary said.

Despite these challenges, the Nedan Foundation focuses on educating and empowering other vulnerable parts of the district. With the help of UNICEF, they identified 25 locations where people have been displaced by ethnic conflicts and set up an adolescent club at each location. Thousands of young boys and girls ages 10-19 years-old have been mobilized to fight for their right to quality education through these clubs, according to Narzary. The clubs provide a safe space for children to share their thoughts and discuss their problems while also teaching them life skills and educating them on their rights.

In one relief camp in Kokrajhar, where many families have settled since an ethnic riot in 1996, lives 18-year-old Samiali Mormu. She has seen many of her friends trafficked to cities, with seldom returning. She, however, decided to seek help from the Nedan Foundation and earn a scholarship to continue studying. Now in her first year of graduation, Mormu is the president of her adolescent club and encourages young girls to seek funds from NGOs and the government when their parents ask them to drop out and work due to poverty.

“Illiteracy and poverty have compelled the parents to take desperate measures and send their children away to work without realizing the consequences. The adolescent club members, however, have reported and intervened in many cases of child trafficking. They’ve become agents of change,” Narzary added.

Falita Kumar, is an active member of an adolescent club. Photo courtesy of Sarita Santoshini

The concept of adolescent clubs has worked extremely well in the tea estates of Assam as well. In partnership with UNICEF, the Assam Branch of Indian Tea Association (ABITA) started a child protection program in 2007, with the mission to educate and empower the children of laborers working in tea estates across the state. Today there are 191 adolescent girls clubs in 116 tea gardens in Assam, with thousands of girls between the age of 10 and 18 as active members. This program has been a welcome change in the struggle to effectively implement the Plantation Labors Act 1951 in several tea estates of Assam, which impacts child labor and trafficking rates.

In Namroop Tea Estate, girls arrive for their weekly club meet on a Friday after school. Falita Kumar, 18, appears quiet at first, but she actively engages in the discussion, unafraid to share her thoughts. It’s hard to imagine that she was a shy kid who dropped out of school.

“My parents were in debt and being illiterate themselves, they did not take up my education seriously so I had to drop out. But after joining the club, I was encouraged to start studying again and felt confident enough to seek a better life for myself,” Kumar said.

Kumar and a few other girls of the club have been actively organizing street plays in 15 tea gardens, including their own, to spread awareness about children related crimes. “There was one time when the girls enacted a play about the harsh reality of child trafficking in another tea estate, following which the laborers there decided to get hold of the agent who’d taken many of their kids to different cities for work. They discovered that their children were being exploited and were fortunately able to rescue them. Their manager wrote to us expressing gratitude for the eye-opening act that had saved many children’s lives,” Gautam Barooah, the senior manager of Namroop Tea Estate, said.

Most laborers in the tea garden, including Kumar's parents, are illiterate. Until the adolescent club began to spread awareness, most of them did not know that their children in the 6-14 age group could receive free education under the Right to Education Act. Due to their illiteracy, most also did not ask questions or seek to find answers for their children regarding their right to an education. Inspired by the club, a few other educated adolescents started providing Sunday classes to the adults in the tea gardens. On their only day off, some tea laborers in Namroop have begun to learn spoken English, write and sign their own names. They're doing this for their children, they say.

“A lot of parents are now aware of the benefits of literacy and we insist that they should save up for our schooling so they don’t have to send us to work. I think the girls here always had the potential, we just needed that push,” Kumar remarked with a wide smile.