A new installation in England turns trash into illuminated art—and shines a spotlight on our damaged oceans. 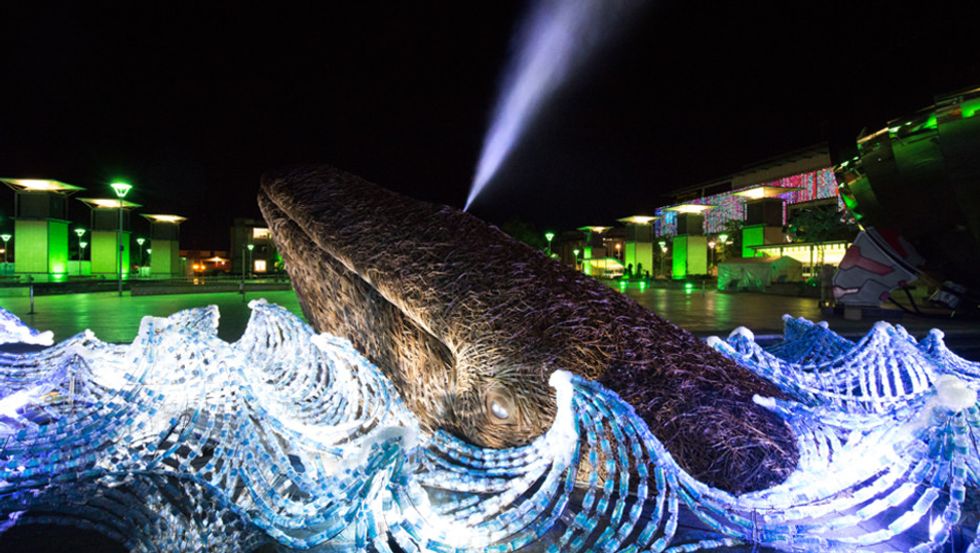 It’s no secret that the ocean is filled with trash, but what about an ocean made of trash? Recently England’s Cod Steaks commissioned The Bristol Whales, an immersive installation containing a pair of larger-than-life whales—made from locally-harvested willow branches—that appear to “swim” through a sea of plastic bottles.

Each of these containers, which number over 70,000, were gathered from this year’s Bath half-marathon and Bristol 10k. The installation was designed and built by Cod Steaks and initiated by Artists Project Earth, a local non-profit institution funded by Arts Council England. Much of the ocean-of-plastic’s charm really shines at night, when each bottle is illuminated—giving its “waves” the appearance of movement.

“The Bristol Whales represents the beauty and fragility of our oceans and the increasing human threats that they face,” says a statement on Cod Steaks’ website.

“'The Bristol Whales’ project shows Cod Steaks ability to conceive beautiful, emotive and robust works of art that the public can interact and engage with. Using the correct materials was of paramount importance,” says Sue Lipscombe, Managing Director of Cod Steaks. “We harnessed the natural beauty of willow and sympathetically meshed it with graceful rolling plastic bottle waves, to create a simple yet impactful message. What’s more, we have made a pledge that every plastic bottle used in the sculpture will be recycled.”

Each whale was made by hand using willow branches harvested in nearby Somerset, England.

The over 70,000 plastic bottles were collected after several local sporting events.

The original model for The Bristol Whales.

At the night the installation comes alive.

The world’s first “Act of Cod.”

Intrigued? Check out the behind-the-scenes video below for more.