We love it when powerful people stand up for what’s right. 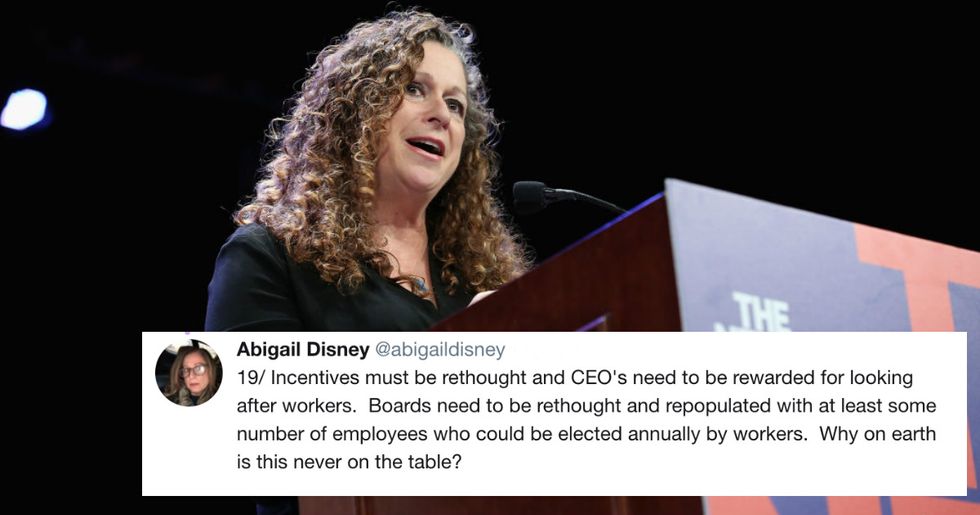 Abigail Disney may just be the Disney princess America needs right now. The granddaughter of Walt Disney is calling on executives at the media conglomerate to give 50 percent of their annual bonuses to the lowest paid employees at the company.

"I believe that Disney could well lead the way, if its leaders so chose, to a more decent, humane way of doing business," she wrote in an op-ed published in The Washington Post.

The piece has resonated with progressives, being shared thousands of times including by influential political voices such as former Clinton White House Labor Secretary Robert Reich.

It wasn’t the only recent call to action from the Disney heiress, who just a few weeks ago called the company’s executive bonus at the company “insane.”

1/ So acc to Fortune, critics of outrageous CEO pay are getting it all wrong. "Alex Edmans, professor at London Bus… https://t.co/cLKRH3bDAw
— Abigail Disney (@Abigail Disney) 1556055806.0

CEO Bob Iger and five members of his leadership team are estimated to earn $62 million in bonuses this year alone, according to CNN.

But if Abigail Disney had her way, roughly $31 million of that would be distributed amongst the lowest paid 10 percent of employees that make up the company's massive 200,000 person workforce.

"Besides, at the pay levels we are talking about, an executive giving up half his bonus has zero effect on his quality of life," she wrote in her op-ed. "For the people at the bottom, it could mean a ticket out of poverty or debt. It could offer access to decent health care or an education for a child."

The Walt Disney company has repeatedly defended its pay standards, including CEO Iger’s massive salary and bonus incentive structure. And they have a point, the company posted record profits in 2018 and is almost certain to build on that financial success in 2019 with their acquisition of properties from Fox - which will give the studio access to even more high-profile content like the Avatar series from James Cameron, The X-Men and Deadpool, adding to their already massive roster of blockbuster properties such as The Avengers and Star Wars. The company is also set to launch its Disney+ streaming service, which is expected to be a viable rival to other services such as Netflix, Hulu and Amazon Video.

Disney has also stood by its efforts to raise the minimum wage it pays employees at its theme parks, a major source of revenue for the company. However, Abigail Disney says those increased wages still don’t account for cost of living in dense population centers like Southern California and Florida, where even a $15 hourly wage is not enough to cover basic cost of living expenses.

"At a company that has never been more profitable, whose top executives drive home with seven- and eight-figure paychecks and whose primary resource is the good-spirited, public-facing people who greet guests day after day, why are we dancing around a minimum wage anyway?" she wrote.