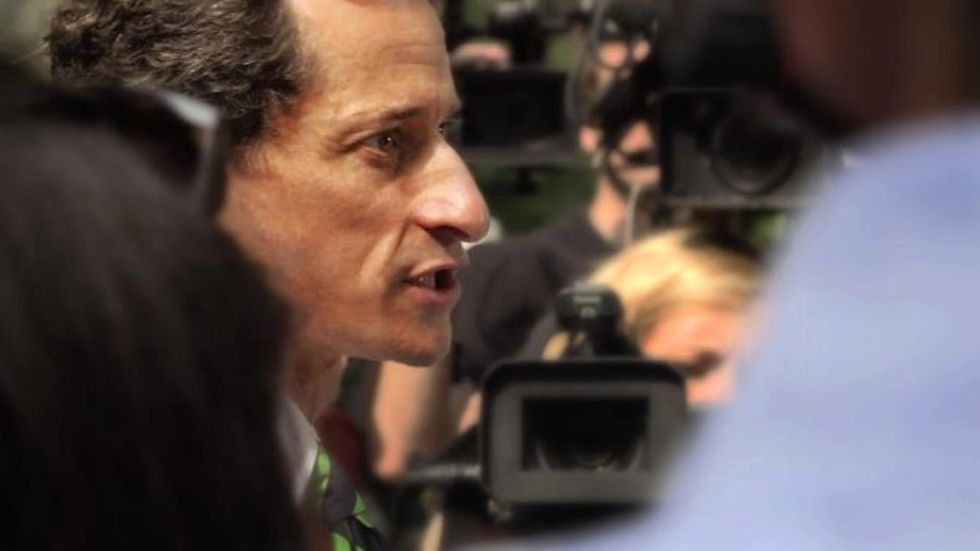 The most shocking thing about Weiner, the documentary out now about Anthony Weiner’s sexting scandal and 2012 New York mayoral campaign, is how much access Anthony Weiner and Huma Abedin (his wife, and Hilary Clinton’s right-hand aide) gave to the filmmakers. It’s not as surprising once you learn that Josh Kriegman, a co-director to Elyse Steinberg, once served as Weiner’s chief of staff when he was a New York congressman. This was, of course, before Weiner would accidently post a photo of his underwear-clad member to his public Twitter profile in 2011, triggering a scandal that would force him to resign from office. This is where the documentary begins, at the launch of his 2013 mayoral campaign, as Anthony Weiner embarks on an ill-fated attempt to salvage his political career and regain the respect of his wife.

Almost immediately, Weiner establishes an intimate relationship with the embattled political couple, with scenes of the pair playing with their son, Jordan Zain Weiner, inside the nursery of their New York apartment. Huma—oh, Huma!—sitting cross-legged on the floor, assumes a battle-worn posture and glum expression that she would maintain throughout the political campaign, and throughout the documentary.

Poor Huma. No film has ever captured the visage of a woman so beleaguered, so weary, so done-with-your-shit. Her jaw remained so tightly clenched throughout the film, her eyes focused, unblinking, on the distance, to, presumably, an alternative future where she isn’t married to someone who is so wholly incapable of not fucking shit up. Huma, pacing, Huma, shaking her head. Huma, closing her eyes and pursing her lips in the backseat of a black car. One wonders, fearfully, what she’s silently contemplating as she watches him, arms perpetually crossed in an angry stance, as he so frequently and so thoroughly destroys himself and humiliates his family. Huma becomes, throughout the film, an avatar for every powerful woman who’s had to tolerate the relentless follies of the man in her life, and who’s had to bear the full weight of his stupid, stupid mistakes. Far be it from me to wonder what keeps her in the marriage, but, god, one can’t help but speculate on the ways in which being married to Anthony Weiner has held Huma Abedin back from completely taking over the world.

Needless to say, it’s Huma who steals most scenes away from her fool-hardy, hotheaded husband. Huma, standing to the side, using every muscle in her body to prevent a primal scream and a sound clap to his ears. It’s incredible—really incredible—that they let the cameras come this close, and capture the pulsating veins on Huma’s forehead. At one point, the filmmaker asks Weiner, “Why have you let me film this?” Weiner does not answer. Who knows? Temporary insanity? Preening self-regard? The film, which won the Sundance Grand Jury Prize and will be in theatres later this May, is filled with so many delightful moments it’s hard to pick one. So here are a couple of our favorites.

Weiner enlists the help of his wife to fundraise for his Mayoral campaign. Huma performs the scene with the resolve of a cold political operative. She picks up with the phone with warmth in her voice, but the smile falls away each time she puts the phone down. At one point, one of her contacts tells her they can’t contribute funds to the Weiner campaign because of a conflict of interest. “This is your A-list?” Weiner asks her. “I’m not going to do this if you’re going to make it unpleasant,” she responds. You’ll need a machete to cut through the tension.

“You Will Look Happy”

When the second wave of sexting stories blew up, Weiner’s campaign staffers did not let him off the hook for leading them into battle completely blind. They surround him in the living room, interrogating him about what happened. Bagga confesses to Weiner, “I’m extremely frustrated at your lack of clarity with me.” Barbara Morgan, his spokesperson, looks on the verge of tears as she tells him the press has been harassing her. Huma tells her sternly, “just as an optics thing”, that “You will look happy. I’m saying this for you.” I feel real terror for anyone who willfully disobeys Huma Abedin.

After Weiner’s completely off-the-rails appearance on MSNBC—in which Lawrence O’Donnell asks, over and over again, “What is wrong with you?”—Weiner and Huma watch the video from their home. Weiner is smirking, trying to play it off, but it’s so clearly a tragedy. “Why are you laughing?” asks Huma. “What was I supposed to do?” asks Weiner, giggling. Huma, unable to stomach another moment in the presence of her inferior husband, turns away in disgust and walks out of the room. She can barely contain her slow-burning resentment.

Weiner retells an awful Rodney Dangerfield joke to Barbara Morgan as they sit in the back of an SUV (It goes like this: “I like to go to bed with 2 wives. That way when I fall asleep, they can talk to each other.”) Morgan’s laughter is forced and uncomfortable. They ride in awkward silence. Everyone is embarrassed for him. Everyone. Bill Clinton, somewhere, is shaking his head and feeling ashamed on behalf of this poor fool.

Huma, in the kitchen, tells the camera solemnly: “It’s like living a nightmare.” Disappointment hangs on her face like a veil.

When Huma learns that Leathers is waiting to confront Weiner at the election night party, she tells Weiner, “I’m not going to face the indignity of being accosted by this woman.” The audience at this point is one hundred percent on her side. No one, not even Weiner, blames her for ditching the party. We all hope she has some good kush for comfort.

In a thrilling denouement, Leathers literally chases Weiner through a McDonald’s a back way entrance to the venue for Weiner’s election night party to confront him on camera. “Seriously?” she squeals, “All to avoid a 23-year-old?” Leathers’ brazen thirst for tabloid celebrity is still more palatable than Weiner’s complete and total disregard for anybody but himself.

In one of the final on-camera interviews, Weiner tells the interview, “I still have this richly unlimited ability to fuck things up, day by day.” Huma is sitting in the background, despondently eating a slice of pizza, probably quietly plotting her revenge? She is an enigma wrapped tightly around a fiery ball of rage. One day portraits of Huma will hang over every fireplace and pedestal in America, every day will begin with a pledge of allegiance to Abedin, our fearless leader—all of us, willing subordinates—and we will play back this scene—this one—as the catalyst of it all. But right now? She’s charging up, saving her energy.