“Auto-Complain” lets bikers tag and show the world where the roughest roads are. 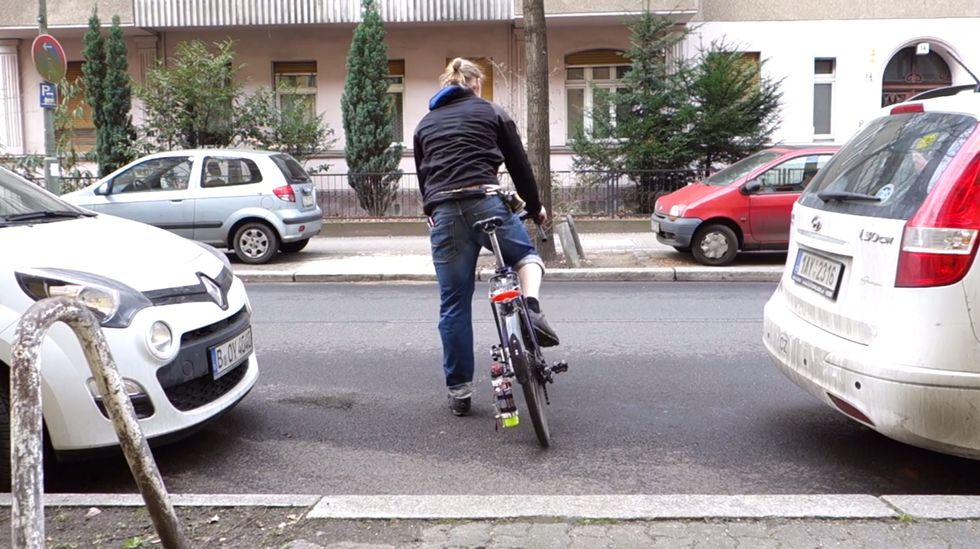 Ask any cyclist and they’ll tell you: Potholes aren’t just an unsightly nuisance, but can actually pose a potential safety hazard. Hit a deep enough hole and a biker risks not only ruining their ride, but may end up flying head over handlebars and seriously injuring themselves, as well. What’s more, while it’s probably safe to assume that every street is going to have its fair share of potholes, there’s no good way to keep track of exactly where and how bad those holes are, much less do anything about it.

Berlin-based programmer Florian Born has come up with a way for cyclists to not only identify problem pothole sites, but to share that data with other riders, as well as a city government’s road repair department. Called “Auto-Complain,” Born’s system is comprised of two parts: A smartphone app, and a bike-mounted paint dispenser. The app works with a phone’s internal accelerometer to measure sudden changes in the bike’s motion, and record the offending pothole’s location and “intensity.” It then triggers the mounted paint dispenser to physically mark the spot in the road, using water soluble paint that washes away after a few days. Information collected by the app is mapped out in the Auto-Complain database, and can be automatically shared with the appropriate government agency responsible for fixing roads.

The goal of Auto-Complain, explains Born on the app’s website, is to effortlessly streamline the otherwise onerous process of recording and fixing potholes. He writes:

Every cyclist hates potholes in the streets. But complaining about them via the official way can be extremely time-consuming and annoying. Bureaucracy often leads to a dead end and involves a lot of paperwork. Auto-Complain offers the possibility to automate the act of demanding road renovations by using a simple app.

Currently the Auto-Complain database contains less than fifteen hundred entries worldwide, as Born works for ready his service to be made available to the public. But, reports PSFK, both the app and bicycle-mounted paint dispenser are fully developed, and simply awaiting commercial release. Once ready, the service will join other high-tech methods for publicly reporting potholes, such as Panama City’s self-tweeting pothole devices, which, once placed in a hole, automatically troll city officials via twitter, every time they are run over by a car.