Remarkable Arabic Calligraphy Tattoos Are the Focus of this Photo Project

One Jordanian photographer is documenting the growing poppularity of skin ink in the Middle East and North Africa. 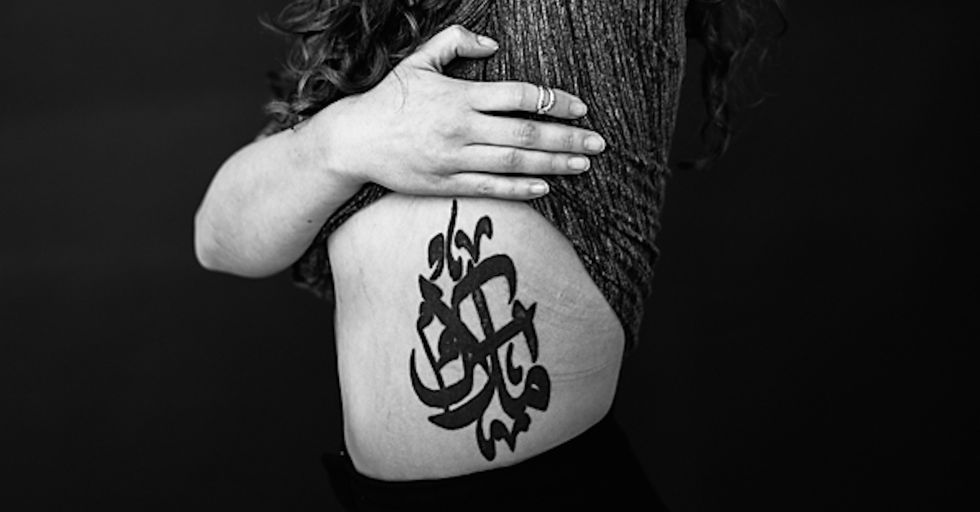 The first rule of getting a tattoo in a language you don’t know is: don’t. The Internet is awash in stories of foreign language tattoo disasters. Arabic is a common motif, because Arabic tattoos look pretty to the untrained eye, but they’re really hard to execute with an untrained hand. Arabic calligraphy and typography, when penned by professionals, are extremely beautiful forms of art and, as calligrams, can work doubly as text and images. Jordanian photographer Bashar Alaeddin has been documenting the proliferation of Arab calligraphy tattoos all around the world. The images he’s capturing not only record the growing popularity of contemporary tattooing in the Middle East and North Africa, but they also demonstrate the beauty of Arabic script.

Alaeddin began the project in 2013, and he’s still collecting images for a website project that would feature interviews with tattoo artists and calligraphers, guides to tattoo parlors in the Middle East and North Africa, and a database of Arabic tattoo photos.

“There are a lot of things written in my notes about what it is and what it will be,” Alaeddin told BarakaBits. “Alongside that as well will be an exhibition, a book and even as far off to make a 2nd edition book since this is something that I don’t think will end. More content and images will be constantly added over time and will hopefully just keep going.”

"Do not fear death, fear a life not lived". Photo courtesy of Bashar Alaeddin.