Ben Shapiro storms off set after being crushed by a fellow conservative.

The BBC interview is going viral after the right-wing pundit was humbled on air. 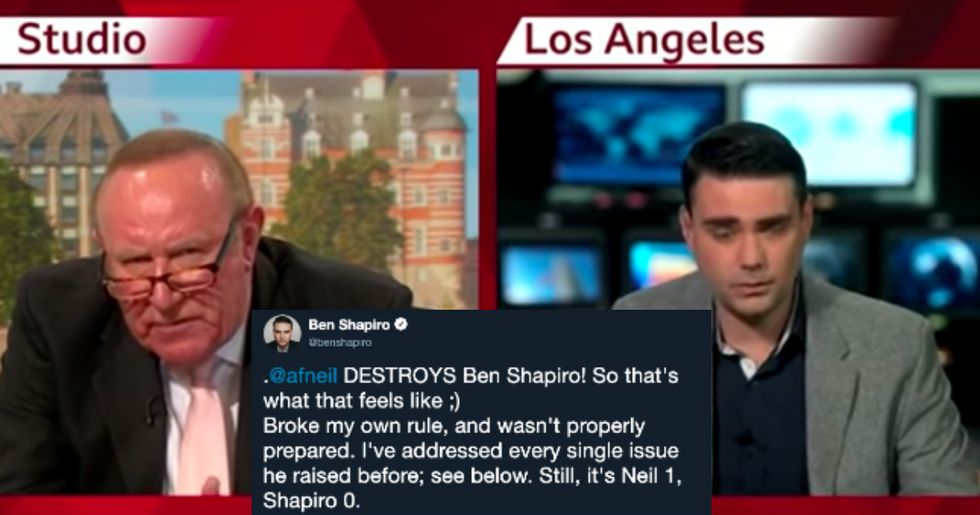 Conservative pundit Ben Shapiro knows how to talk. So, it’s not often that he is left without a strong counterpoint in public debates. However, that’s exactly what happened in a new interview on the BBC that is going viral.

Shapiro was being interviewed by host Andrew Neil. Aside from a few softball questions (Which Democrat could beat Trump in 2020, etc.), Neil decided to hold Shapiro accountable for several of his past tweets demeaning American Jews who supported Barack Obama and saying Palestinians chose to live in “sewage.”

Neil also wanted to know about some of the draconian abortion restrictions that have been making their way through state legislatures in the U.S. South and that really drew the ire of Shapiro, who unsuccessfully tried to turn the tables on Neil by calling him a biased “member of the Left.”

At this point in the interview, the decidedly British Neil finally cracks and just starts laughing out loud saying Shapiro would realize how ridiculous a statement that was if he actually knew what he was talking about.

It never comes up again in the interview but the reason Neil found Shapiro’s attack so ridiculous is being Neil himself is a prominent conservative journalist who has worked for Rubert Murdoch and edited The Spectator, the UK’s most influential conservative publication.

Of course, none of that knowledge is necessary to delight in Shapiro being taken to task for his own finger-wagging morality about political discourse and intellectual honesty. Things got so rough for the young “thought leader” that he finally stripped off his microphone and ran away Neil’s fairly pedestrian line of questioning.

“I am not inclined to continue an interview with someone as badly motivated as you” US conservative political com… https://t.co/Z68bb1tKaQ
— BBC Politics (@BBC Politics) 1557492828.0

In Shapiro’s defense, even he admitted to being “destroyed” by Neil. On Twitter, Shapiro accurately noted that he’s tried to explain his more combative statements before but nonetheless acknowledged “Still it’s Neil 1, Shapiro 0.”

You can watch the entire 16-minute-clip below. It’s well worth your time and something every American, left or right, should watch if they want to be reminded of how strong our discourse actually can be when those asking the questions have down their homework.