Joe Biden promises to be ‘more respectful’ of women’s personal space in a new video. 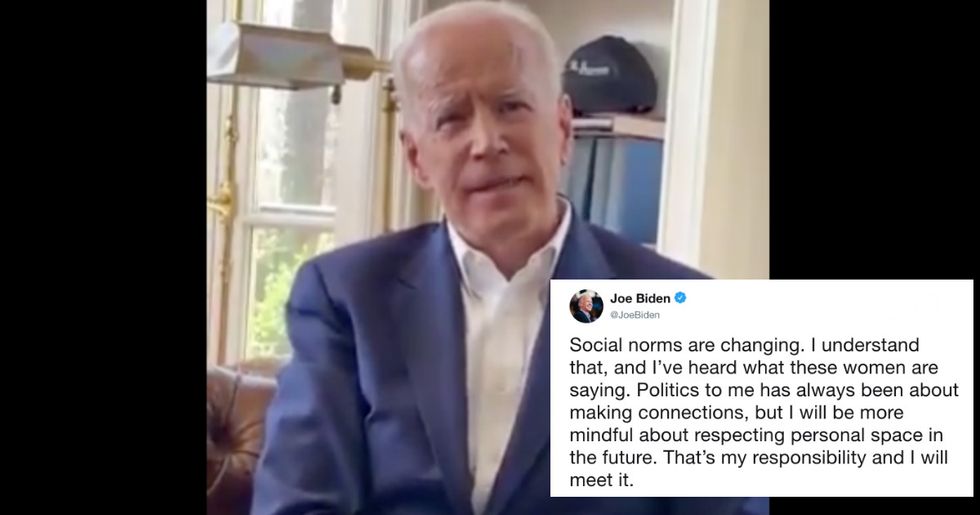 Former Vice President Joe Biden is leading most of the 2020 Democratic presidential primary polls. He’s the most experienced candidate running and that’s been a huge advantage. But with decades of experience comes decades of potential baggage - something Biden has become painfully aware of this past week.

After several women came forward to discuss how Biden’s touchy personal style made them feel uncomfortable, Biden finally addressed the controversy in a new video posted to Twitter.

“In my career, I’ve always tried to make a human connection. That’s my responsibility, I think. I shake hands, I hug people. I grab men and women by the shoulders and say, ‘You can do this,’” Biden said. “Whether they’re men, women, young or old it’s the way I’ve always been and the way I try to show them that I care about them and that I’m listening.”

Social norms are changing. I understand that, and I’ve heard what these women are saying. Politics to me has always… https://t.co/OGubjbOniI
— Joe Biden (@Joe Biden) 1554317849.0

What’s interesting is that there’s nothing new in the criticisms leveled at Biden. For years, reporters, late-night hosts, and even his fellow political leaders have joked about his personal style. The affable, retail politics approach was a powerful asset during Biden’s time in the White House, as one of the few lingering critiques of President Obama was that he was often unwilling to get in the trenches and mingle with members of Congress, or spend late night hours with them negotiating legislation. Biden, having spent most of his adult life in the U.S. Senate, was personally beloved by lawmakers across the political spectrum and often seen as a bridge to Obama’s administration.

Interesting, in the video, Biden tied his hands-on approach to the tremendous grief and personal tragedy he has experienced over the year. Earlier in Biden’s wife, he lost his first wife and daughter in a car accident. And in 2015, Biden’s oldest son Beau died after a bout with brain cancer.

“Over the years with the things I’ve been through and that I’ve faced, I’ve found that scores, if not hundreds of people, have come up to me and reached out for solace and comfort,” Biden said. “Something, anything, that might help them get through the tragedy they’re going through.”

Nonetheless, Biden promised to change his behavior to match the changing times.

“Social norms have begun to change. They’ve shifted. And the boundaries of protecting personal space have been reset,” he said. “And I get it. I get it. I hear what they’re saying. I understand it and I’ll be much more mindful. That’s my responsibility. And I’ll meet it. But I’ll always believe that governing, life for that matter, is about connecting. That won’t change. But I will be more mindful and more respectful of people’s personal space and that’s a good thing. I’ve worked my whole life to empower women. I’ve worked my whole life to end abuse.”

Now, what remains to be seen is how the political world responds to his video. The greatest risk a politician faces is being seen out of touch. No one has accused Biden or sexual harassment or assault. But if he can’t convince voters that he’s aligned with their values in 2019, his status as frontrunner could quickly disappear.