Joe Biden ‘Eviscerated’ Trump in a speech for the ages.

“Donald – it’s not about you. It’s about America.” 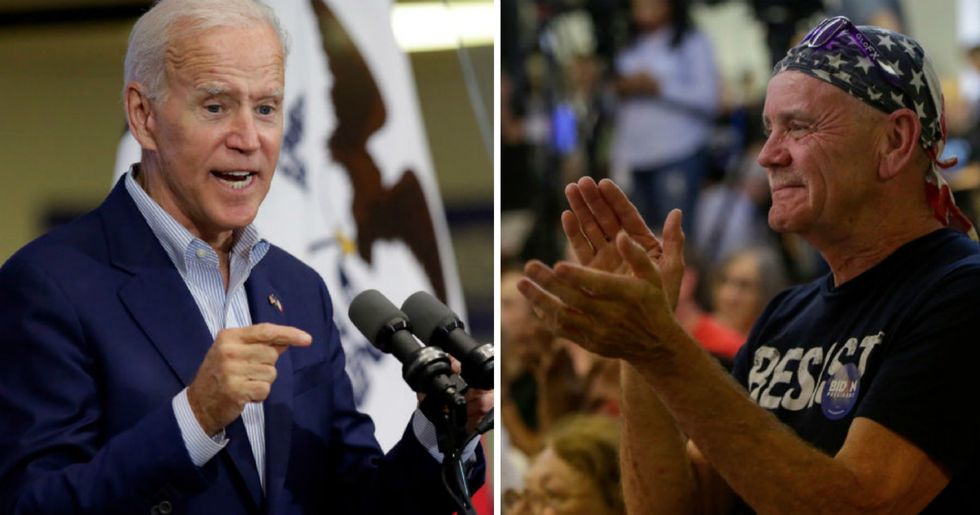 Joe Biden is coming for Donald Trump and he’s being shy about it.

If you’re a Democratic primary voter, you might be having mixed feelings about the former vice president. He’s leading every national and key primary state poll but he’s also taken recent hits over his views on abortion, more moderate foreign policy and his hands-on campaign style that has turned off a vocal minority of younger voters.

But for those same voters there should be no daylight when it comes to choosing between Trump and Biden. And that may be exactly why Biden aggressively turned his attention to the president during a speech in Iowa in which he attacked Trump by name or indirectly no less than 76 times.

It was a visceral attack for the man commonly referred to as “Uncle Joe,” oftentimes teased for being too laid back.

Instead, Biden showed why his supporters think he is the best candidate to take on Trump where it hurts the most: with white, middle-class voters who swung from President Obama in 2012 to Trump in 2016 across states like Pennsylvania, Wisconsin, Ohio and Michigan.

”How many sleepless nights do you think Trump has had over what he is doing to America’s farmers?” Biden rhetorically asked his crowd of supporters. “Here’s the answer, as many as he had when he stiffed the construction workers, electricians, and plumbers who built his hotels and casinos — zero.”

Biden didn’t stop there. He then turned his attention to foreign policy -- an area of expertise for the longtime Deleware Senator and former chair of the Foreign Relations Committee. Biden singled out Trump for not only warming up to thuggish dictators like Vladimir Putin, but for also failing to get anything of value in return for American interests.

“Did he do anything to signal that he’s prepared to walk away from the thugs he’s embraced on the world stage — from Putin to Kim Jong Un?” Biden said. “No. He did none of that. Instead, he gets up in the middle of the night to attack Bette Midler. He attacks the mayor of London. He attacks the American Speaker of the House. It was a stunning display of childishness for the whole world to see.”

He echoed the same sentiment when it comes to China: "Trump doesn’t get the basics. He thinks his tariffs are being paid by China,” Biden said. “The cashiers at Target see what’s going on — they know more about economics than Trump."

President Trump thinks his tariffs are being paid by China. Just like he thinks Mexico is building the wall.
— Joe Biden (@Joe Biden) 1560301800.0

Sure, now that he’s president, it’s important for his political opponents to attack him on his policy decisions, his overall demeanor and the risks of re-electing him to a second term. But it’s equally clear that Trump is a force of personality and mitigating his personality by making him appear small - literally and figuratively - may be the best way to flip the White House from red to blue.

“Remember when Trump’s Justice Department decided to argue that the Affordable Care Act in its entirety is unconstitutional just a few months ago?” Biden said. “Now he’s got his tail between his legs and barely mentions it — doesn’t even tweet about it — because he knows the American people will give him a thrashing in 2020 just like they gave the Republicans in 2018 for trying to get rid of it.”

Finally, Biden brought it all home by pointing out that the biggest distinction between Trump and everyone else is Trump’s solipsistic view of America … there’s no reality outside that which serves The Donald’s own self-serving interest. And for those who are ready for real change in America, it’s time for the barrage of narcissism to come to a stop.

“We choose hope over fear. Unity over division. Truth over lies. And science over fiction," Biden said. “Donald – it’s not about you. It’s about America.”