Black guy gets hilarious revenge on racist white lady who tried to cut him in line. 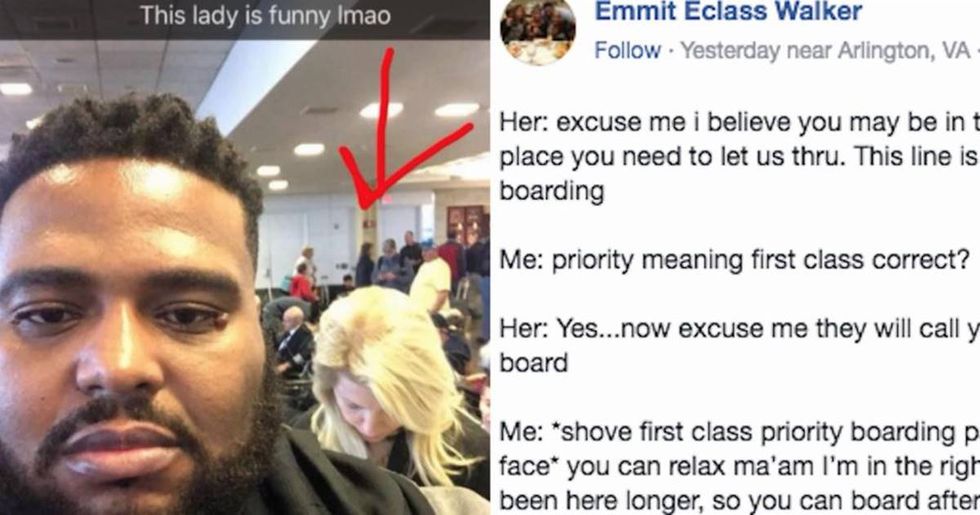 Meet Emmit Walker, a DC-based music executive and an extremely good sport when it comes to not-so-casual racism.

Walker was at an airport in Virginia waiting in line to board his flight when the woman behind him tried to cut him in line. Apparently she insisted she was boarding in front of him because “this line is for priority boarding.”

The woman is white, and Walker is black. So let’s just say that race definitely factored in to her assumption that he couldn’t be a “priority passenger,” which he most definitely was.

Walker documented the rest of their interaction, including his hilarious retort, in a Facebook post which has since gone big-time viral:

Her: excuse me i believe you may be in the wrong place you need to let us thru. This line is for priority boarding

Her: Yes...now excuse me they will call y’all after we board

Me: *shove first class priority boarding pass in her face* you can relax ma’am I’m in the right spot, been here longer, so you can board after me

Her: *still won’t let It go* he must be military or something, but we paid for our seats so he still should have to wait

Me: nope to big to ever be in anybodies military. I’m just a nigga with money

Everybody waiting in line: starts to clap lmao

Everybody waiting in line, and everybody reading this story:

Not only did Walker just land one of the best clap-backs of all time, he got LITERAL APPLAUSE. And at the time of this publication, Walker’s post has been shared over 250,000 times and wracked up nearly half-a-million likes.

Mega-points Emmit Walker, because everyone knows that viral revenge is the best kind of revenge.

That being said: air travel is enough of a nightmare without adding racism into the mix. This guy deserves some air miles and a free massage in the first class lounge, stat. Not that he needs it. He’s got $$$$$$$$$$$$$$$.

After arriving at his desination, Walker was amazed to find his post had gone viral. So he he apologized to the racist woman for bringing her any unwanted attention.

“When I posted that post on Facebook i didn’t expect all that to come from it. I can honestly name the four or five people i thought would comment with something funny, and that will be it. This racist stuff is definitely a issue but this is not the solution to that issue,” Walker wrote on Instagram. “It brings me no joy waking up in paradise to for my 37 bday and knowing that woman might be going threw hell.”