A parent asks a mom to donate her breast milk to their hungry toddler. It gets weirder.

Her breast milk, her choice. Let’s get that on a t-shirt. 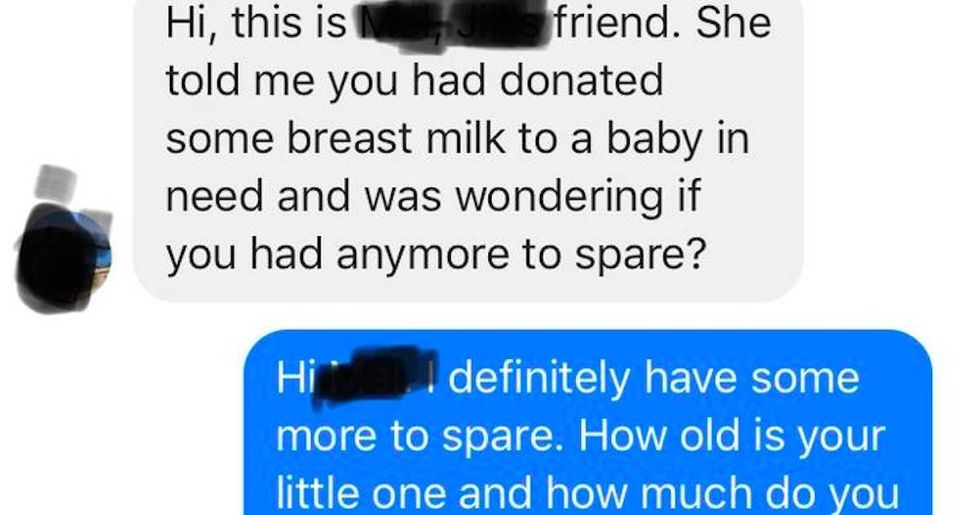 It’s hard out here for a person in desperate need to get their hands on some fresh breast milk for their toddler. Someone online shared a text conversation that took a turn when she wouldn’t give the person the amount of breast milk that they wanted. You can find literally anything on the internet.

According to the screenshots, this woman received a request for her to share some of her breast milk after the person reaching out had heard that the woman was donating milk to babies in need. The woman kindly offered to give the person 60 ounces of breast milk, but that didn’t seem to satisfy them.

Read the entire conversation below to figure out why ...

That’s right, this person got all fired up because the woman wouldn’t just give a ton of breast milk to their two-year-old son. I know this person is claiming the milk is for their son, and it’s strange enough that they feel their toddler needs it so badly, but I also get the feeling that there maybe isn’t any toddler. The texts escalate so quickly that I wonder if this person is just trying to get some breast milk for themselves.

Either way, if you call a woman a ‘bitch’ because she won’t give you her breast milk, then you’re probably just a very unhappy person. A woman’s breast milk comes from her body, and therefore what she does with it is her choice. Her breast milk, her choice. Let’s get that on a t-shirt.