The New Hampshire employee was let go for ‘theft.’ 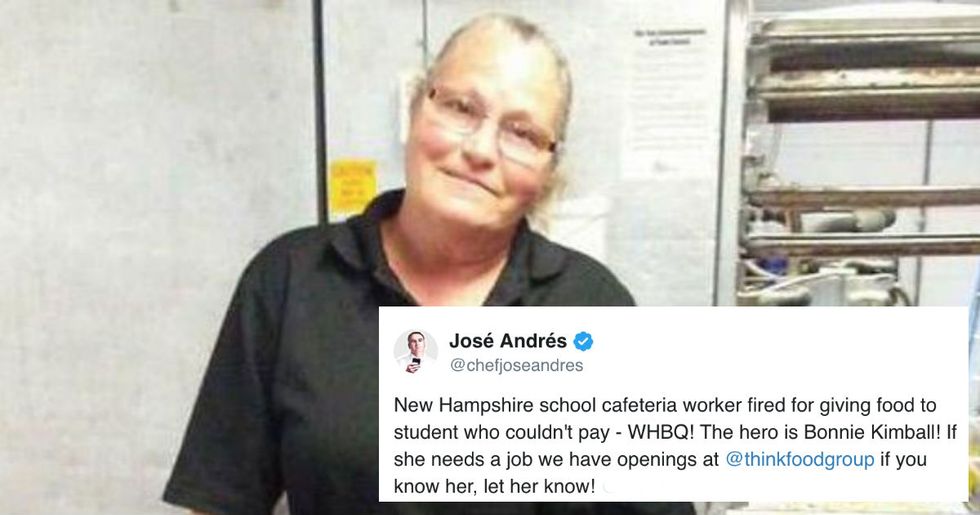 When a high school student at Mascoma Valley Regional High School in Canaan, New Hampshire, came down the lunch line, but couldn’t pay, cafeteria worker Bonnie Kimball served him a meal for free. A week later, Kimball lost her job.

Kimball claims she knew the student his entire life, and trusted that when she asked him to pay next time, his parents would send the $8 to cover the lunch debt. The next day, April 4, the student brought in the money but the district manager at Cafe Services, which operates the cafeteria, fired her from her job of nearly five years, according to CNN. The incident has highlighted child hunger in schools on a national level.

Claire Bloom, founder and executive director of End 68 Hours of Hunger, a New Hampshire based volunteer-run program that provides children who rely on school lunches with food over the weekend, said what happened to Kimball reflects a larger systemic issue.

“Here we’re talking about someone who got fired for trying to help a child because they violated the rules — clearly there’s something wrong with the rules,” Bloom told Global Citizen over the phone.

Cafe Services told Kimball that she committed theft by serving lunch to the student, according to CNN.

“To me, letting that kid go hungry because he didn't bring any money that day, that would have been wrong," Kimball told NBC.

A spokesperson for Cafe Services said that the student still would have received a complete lunch — an entree, or sandwich plus two sides — even though he didn’t have money on hand, according to NBC. Kimball let the student take à la carte items, instead of serving him the meal of the day.

School policies that restrict what children can order at the cafeteria based on finances, and limit food options to less nutritious alternatives, are referred to as “lunch shaming.” Lunch shaming can ostracize low-income students, embarrass them, and make it harder to thrive at school if they’re distracted by whether or not they can afford to eat. This month, one Rhode Island school district came under fire for punishing students who had lunch debt with cold meals.

The public has supported Kimball’s decision to cut the student a break, rather than limit his lunch options. Kimball set up a GoFundMe on March 16 and has since raised over $8,000. Students have rallied against Cafe Service’s decision, and two other employees in the lunchroom quit following Kimball’s firing, according to CNN.

Students and staff are rallying behind a Mascoma Valley Regional High School lunch lady fired for allowing a boy to… https://t.co/dBxu4qrDxn
— UnionLeader.com (@UnionLeader.com) 1557963026.0

Cafe Services rehired Kimball on Friday, but she refused the offer, accordingto the Associated Press.

Bloom said that Kimball’s situation isn’t unique to New Hampshire. End 68 Hours of Hunger is in 46 districts in the US, in seven states. Bloom said educators find themselves in situations like Kimball’s where they want to feed hungry students all the time.

“It’s happening in every school district in America — nurses, guidance counselors, and teachers have to keep snacks in their classroom to give to students who don’t have food to eat,” she explained.

The advocacy group No Kid Hungry found that 60% of teachers surveyed said they often buy food for students, spending an average of $300 a year.

Some school districts have tried to make sure no child goes hungry, by serving leftovers to students who can’t afford to pay, according to Bloom. But this method has led cafeteria workers to ensure there are enough leftovers by cooking more food, which cuts into a school’s budget, she said.

There are more than 12 million children struggling with hunger each year, according to the US Department of Agriculture. Hunger can negatively affect children’s performance and behavior in school, and Bloom believes providing food to all students is the only way to build future generations who are strong.

“Every single student in America should get breakfast and lunch,” she said. “Then we don’t have to choose between who’s poor and not poor.”