The Quest for Greener Jeans

Your clothes are a blight on the planet—denim especially. But some new products are taking on the negative toll of fast fashion. 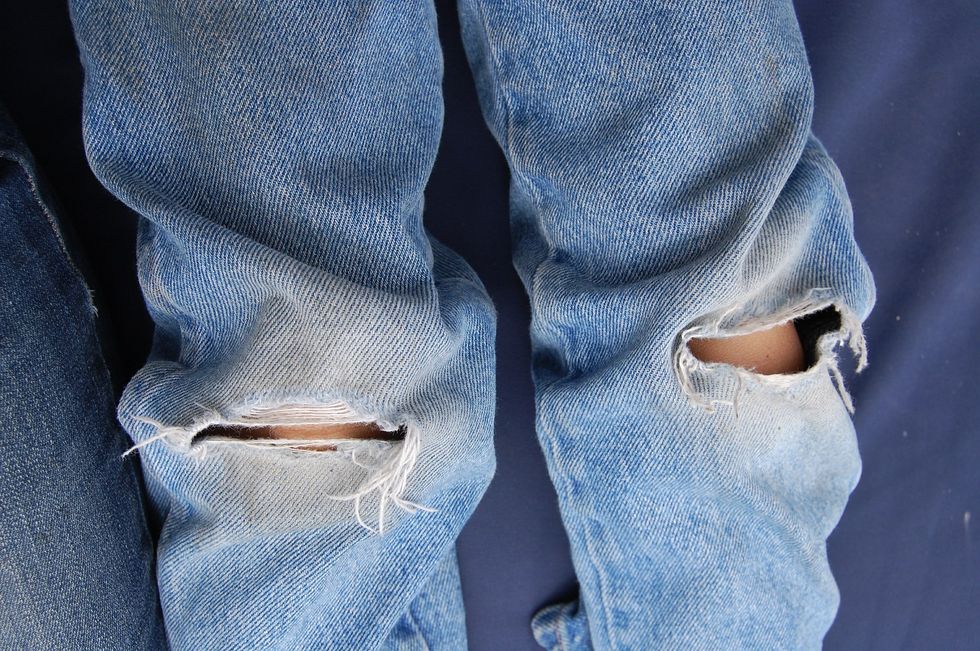 Your clothes are a blight on the earth—especially your jeans. That’s not an assault on your fashion sense. It’s a simple reflection of the environmental toll of modern textile production, laundry maintenance, and consumption and fashion cycles. Over the past year, though, a few fabric and fashion designers have developed products that could make it easier for average people to reduce their clothing consumption, laundering, and environmental burden without taking a hit to their wallets or senses of style and cleanliness.

Let’s start with the problem: Making and cleaning (especially cotton) clothes is a high-impact, water-intensive process. Research from Levi’s suggests that one pair of its pants sucks down 919 gallons of water over its lifetime—50 percent of that via laundering. (The average American drinks 58 gallons of water a year these days.) That lifetime is short for modern clothing, increasingly made to survive one or two years—the figure goes down the more you wash them—in the name of cheap, easy production. Most of us abandon clothing before it’s run its course—a 2015 study conducted in the United Kingdom by the charity shop Barnardo’s suggests that the average British woman wears an item just seven times before donating or trashing it, then purchasing one or more equally environmentally taxing goods to replace it.

Cheap and flimsy clothing, combined with fastidious maintenance and fashionability, are rapidly sapping the moisture from the earth. Cotton overproduction has already all but destroyed an entire sea—the Aral of Central Asia. To combat this scourge, we need to change the way we produce and launder clothes. But for years it’s been hard to convince everyday folks to shift to ecologically sound products and practices, which often seem inaccessible or gross.

The Aral Sea, before and after

To be fair to consumers, many may already think they’re making environmentally conscientious choices when shopping, given the number of brands that bill themselves as green or sustainable. But thanks to the vagueness of these terms, most of these labels are mere marketing ploys with little substance behind them—just tortured interpretations of harmful norms. Those brands that actually do make efforts to be sustainable usually do so by reducing the chemical damage of dying and processing fabrics, using local materials to reduce transit emissions, or relying on small artisans in a bid at social development. While they’re all worthwhile contributions, these innovations do little to touch the water consumption and eco-damage of short-lived clothes.

Some have proposed that we can reduce the environmental impact of clothes by both buying the best green items on the market and changing our laundering habits. Whereas most Americans wear clothes once (or, in the case of jeans, twice at most, according to the firm Industrial Ecology Consultants), then throw them into the washing machine, earth-friendly living guides suggest that we ought to wear our clothes longer before washing, then launder them by hand, ideally while you’re in the shower and using an all-purpose soap. These steps, along with hang-line drying, reduce water usage as well as wear and tear, extending the life of the average item substantially.

Raw denim enthusiasts are among the most rabid supporters of this infrequent and gentle washing scheme, arguing that jeans ought to be washed every six months at most, never at best. You hear that advice not just from crazy individuals, but from denim manufacturers and designers as well. For some it’s a fashion choice, preserving the stiffness and color of the material and creating distinctive fade lines. But for others, like Levi’s CEO Chip Bergh (who in 2014 revealed that he hasn’t washed his jeans in a year), not washing one’s jeans is about decreasing the environmental footprint and increasing the durability of these sturdy clothes. After revealing his own washing habits, Bergh issued an Earth Day challenge to everyone in the world to stop washing their jeans for a month, aiming to get people thinking about the feasibility of greener laundry cycles and practices.

The only catch is that alternative laundering practices—well, they stink. Clothes get disgusting in part because they get stained and in part because they get sweaty. (Sweat itself is odorless, but the bacteria that feed on our sweat, skin cells, and other remnants soaking into clothes reek.) Low-impact-laundry advocates argue that you can scrub out most stains by hand, put clothes in the freezer to kill bacteria, or use earth-friendly products to refresh clothes without water. But most hard-science tests show that these (often cumbersome) fixes don’t actually eliminate smells for very long and might not be enough to get clothes as clean as many people would like. Swedish brand Nudie Jeans outright admits that you’re going to smell a bit foul if you heed their no-wash advice; they just argue that it’s the stench of winners—a claim that’s not likely to convince many.

Yet there’s at least one new product coming onto the market this summer that could circumvent the stench issue—by protecting clothes from sweat and stains and killing bacteria on contact, eliminating odor, grime, and the need for thirsty, harmful laundering. The brainchild of San Francisco entrepreneurs (of course) inspired by Bergh’s personal revelations, ODO Denim has a Kickstarter up for their no-wash jeans and t-shirts. Running until January 30, the campaign has already raised more than 25 times its $10,000 goal. Drawing on the example of NASA space suits, which almost never get washed, ODO infuses naturally antibacterial silver (10 to 15 grams per item) into their fabrics. And looking to liquid-repelling plants, the company figured out how to integrate nanoparticles into their fibers to give them an uneven surface area that deflects most potentially staining materials. As of now, the jeans and shirt (available to investors for $99 and $35 contributions, respectively) come in just a few cuts and styles. And it’s unclear what the life cycle for an item is. But if this material, whose patent is still pending, takes off at ODO and beyond, it could drastically eliminate laundering requirements and clothes’ environmental impact.

ODO’s not the only no-wash clothing trying to break into the market. In 2013 and 2014, another San Francisco entrepreneur and scientists at Harvard, respectively, floated stain-resistant fabrics. Although these fabrics are not antibacterial, if they could repel the stuff (like sweat) that fosters bacterial growth, they could reduce odor as well as the appearance of grime. Also in 2013, a New York startup, Wool & Prince, introduced a $98 button-down men’s shirt that they claimed could be worn for 100 days without washing—just by using wool, which is naturally more durable, long-lived, and moisture-wicking. None of these materials are quite as comprehensive or promising as ODO’s futuristic fabrics. But the growing interest in developing anti-stain, antibacterial, no-wash clothing is heartening.

There’s also been a breakthrough in clothing’s longevity this year, directly combating fast-fashion durability and consumption cycle issues. Last summer Tom Cridland, a 25-year-old designer to the stars, began production on the 30-Year Sweatshirt (a sweater, in American English). Based on a manufacturing process already in use in the small Portuguese town where he’s set up shop, these solid-colored, 80 percent cotton, 20 percent polyester, unisex, direct-from-the-manufacturer crewnecks (which retail for about $96) focus on quality and come with a three-decade guarantee—good for repairs on any rip or tear. This isn’t a totally new tactic. Eddie Bauer, L.L. Bean, and smaller outfits like Darn Tough Socks make similar guarantees and quality products. But Cridland’s project shows a devotion to breaking fast fashion’s unsound consumption habits and the return of clothing longevity’s promotion in the mainstream.

Taken together, the development of no-wash and long-lived products—along with existing efforts by designers to use low-impact production processes—may eventually succeed in drastically cutting down on the environmental impact of clothing. But that’s only true if a critical social mass catches wise to the issues at hand and uses these new clothes as intended. As with all set cultural behaviors, it’ll be hard to break people’s habit of frequent machine washing and thirst for continually new products.

A shift like that could take a while. However, even in the short term, if we can get no-wash, long-lived clothes to the people who’d be inclined to use them for their intended purpose (people like myself!) that would still be an environmental boon. Going by the above-mentioned Levi’s research, owning a single pair of no-wash jeans could reduce your water consumption by 459.5 gallons per year—the equivalent of an average, modern American not drinking water for 8.4 years. Multiply that over millions of willing consumers and dozens of clothing items each, and we’re talking about a serious environmental impact. I’m going to go ahead and look into some of these new, more environmentally friendly clothing choices the next time I’m in need of apparel (i.e., once my current washed-as-needed outfits turn to rags, and no sooner). I hope you’ll do the same.