These colorful “clandestine clowns” set out to keep “the streets both safer and hilarious-er for all people.” 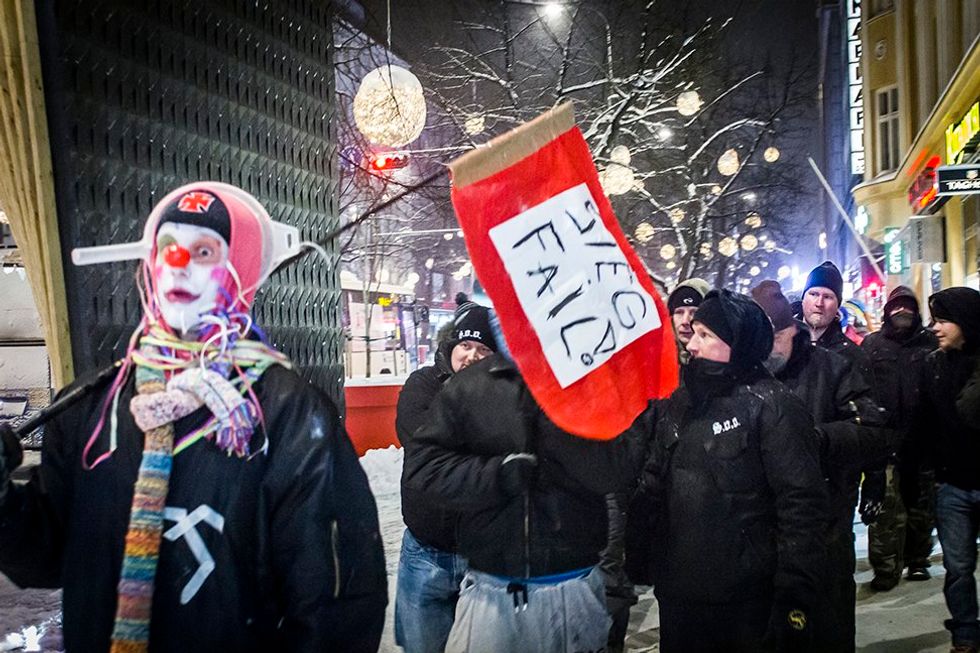 This new maxim is certainly true in Tampere, Finland, where the anti-immigration group Soldiers of Odin have been “on patrol,” supposedly protecting the citizenry from terrorists. What these jokers didn’t count on is that they would be met by some real jesters—the Loldiers of Odin, a group of “clandestine clowns” who are out to keep “the streets both safer and hilarious-er for all people.”

The Yle news website first reported the story after Loldiers of Odin posted a video of their prankster street action on YouTube. It shows the Loldiers—a portmanteau of “laugh out loud,” in internet speak, and “soldiers”—joining the Soldiers of Odin’s patrol and mocking the latter’s veiled neo-Nazism with a flag that reads “Sieg Fail!”

“Loldiers of Odin showed the way with their jolly behavior as they bounced, leapt, crawled, cavorted, skipped and hopped through the city center,” the group wrote on their website. “At the same time in town, there were sightings of members of another street patrol.”

“Rumor has it that patrolling the streets is really trendy nowadays and it’s for the best of all people and animals alike, so we, too rounded up our own, bumbling and clumsy elite troops,” they added. “[W]e are the red noses and huge ears of the police, and we fill their boots with our extra toes. Our numbers vary from zero (0) to a hundred (100).”

Now, if the Loldiers of Odin could just come over to America and protest this country’s nationalist demagogues and their followers.