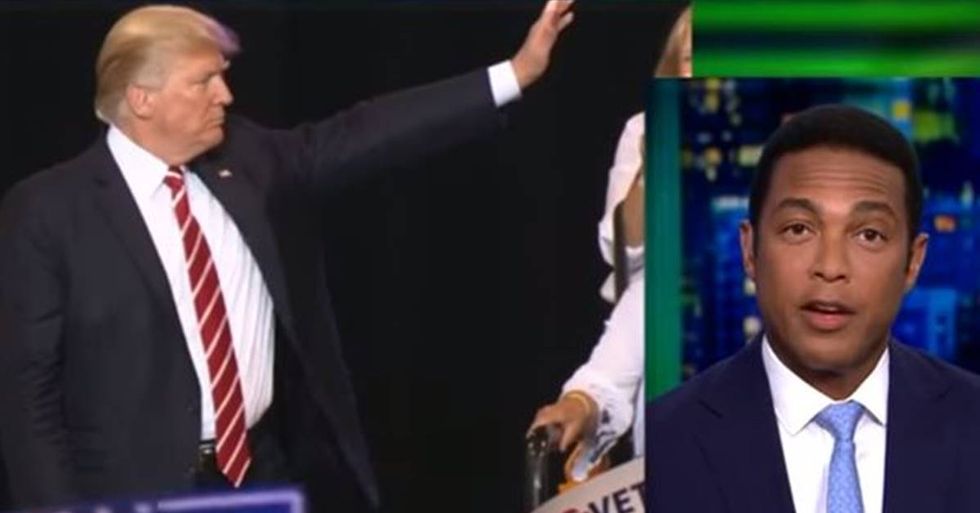 Earlier this week, President Donald Trump delivered a somber speech from a teleprompter about the need for the United States to send more troops to Afghanistan. After the speech, some pundits thought he was making a pivot from his manic, chaotic behavior to a more presidential demeanor. But, once again, reality came knocking on hope’s door Tuesday night, when, in Phoenix, Trump delivered one of his most combative, outrageous, and deceitful performances yet.

In his 80-minute speech, Trump attempted to re-litigate his reaction to the Charlottesville tragedy by blatantly lying about his statements. He attacked the media as being dishonest and vowed to shut down the federal government if he didn’t get funding for a wall on the U.S.-Mexico border. After the speech, CNN anchor, Don Lemon, starred in the camera, bewildered over what he had just witnessed.

Here’s an excerpt from his reaction:

“He’s unhinged. It’s embarrassing. I don’t mean for us, the media, because he went after us — but for the country. This is who we elected president of the United States, a man who’s so petty he has to go after people who he deems to be his enemies like an imaginary friend of a six-year-old. His speech was without thought. It was without reason. It was devoid of facts. It was devoid of wisdom. There was no gravitas. There was no sanity there. He was like a child blaming a sibling on something else. ‘He did it. I didn’t do it.’

He certainly opened up the race wounds from Charlottesville, a man clearly wounded by the rational people who are abandoning him in droves, meaning those business people and the people in Washington now who are questioning his fitness for office and whether he is stable — a man backed into a corner, it seems, by circumstances beyond his control and beyond his understanding.”

After Trump’s speech, #25thAmendmentNow began trending on Twitter. The 25h Amendment is a way for Congress to remove a president from office who hasn’t committed any crimes. First, members of the president’s Cabinet would have to certify that he’s “unable to discharge the powers and duties of his office.” Then, two-thirds of Congress would have to agree through a vote. If the president is removed from office, Vice President Mike Pence would assume the presidency.

The only thing missing is a straight jacket. #25thAmendmentNow #PhoenixRally

the man is sick. he is bent on destruction, not leadership. get him out NOW. #25thAmendmentNow

We all need to start calling, emailing, and writing letters demanding this. It's not funny anymore!#Resist #ImpeachTrump #25thAmendmentNow

Waiting for outrage @realDonaldTrump re last night? @GOP how long will u enable this dysfunctional " person?" #25thAmendmentNow