To outsmart an adult, sometimes it takes a kid. 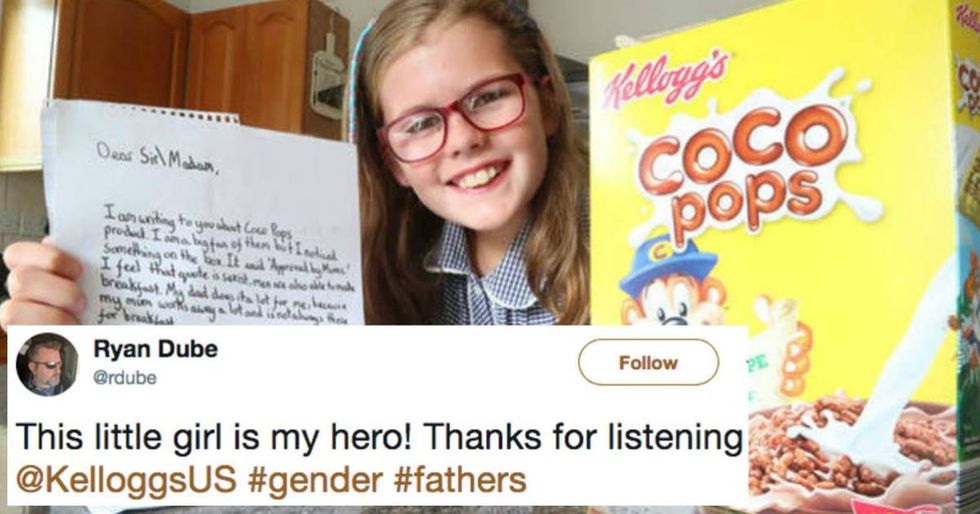 There are children among us who outsmart adults, and I find them both inspiring and terrifying. Are they covertly planning a takeover? When I reach middle age will squadrons of kids be roaming the streets as our overlords? Time will only tell, but it;s undeniable that they are the future.

With the true gumption of a future leader, 10-year-old Hannah-Marie Clayton decided to pen a letter to Kelloggs when she noticed a gender imbalance in the Coco Pops slogan.

While the chocolate-flavored cereal has long used the slogan “loved by kids, approved by mums,” Clayton thought it made antiquated assumptions about moms while also completely erasing dads.

Since Clayton’s mom is frequently traveling for her work as an airline cabin crew leader, it’s her dad that prepares breakfast. The slogan, while inane enough, enforces the idea that moms are always the ones home with children in the morning — which is increasingly less true. Also, Clayton noted that some kids don’t have moms and the slogan could make them feel left out.

This little girl is my hero! Thanks for listening @KelloggsUS#gender#fathershttps://t.co/aPIAzp28nB

“I feel that quote is sexist, men are also able to make breakfast. My dad does it a lot for me because my mum works away a lot and is not always there for breakfast.

I would recommend instead of putting ‘mums’, put parents or carers. It would just mean a small change. In this world today we should’t just rely on women.”

Kelloggs was very receptive to Clayton’s letter, and decided to change their slogan to “loved by kids, approved by parents.”

“We have now changed the wording on our new Coco Pops packs to say ‘approved by parents’,” a Kelloggs spokesperson said. “We agree with Hannah-Marie, dads love to have Coco Pops too.”

Clayton is in pretty great company considering the fact that the beloved Duchess of Sussex Meghan Markle also challenged sexist advertising as a young girl.