Putting them on blast. 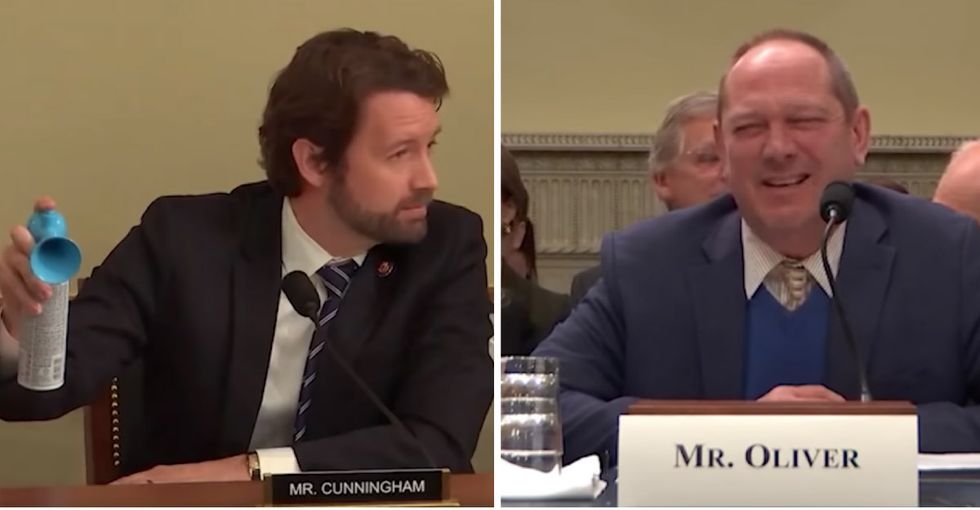 You’ve probably never heard of Chris Oliver before. I know I hadn’t.

But the assistant administrator for fisheries in the Trump’s administration’s National Oceanic and Atmospheric Administration was just owned in a way that any reasonable person can admire.

Oliver was brought before Congress to defend NOAA’s decision to allow seismic air gun tests off the coast of states like South Carolina. The tests help assist in the search for offshore oil deposits. However, states like South Carolina have said they are opposed to offshore drilling, which can cause catastrophic environmental damage, making such seismic tests unnecessary and unwanted by the people who actually live on the nearby land.

Even worse, the tests are detrimental for marine life, especially whales which rely on echolocation in all facets of their lives from navigation to hunting, mating and so forth.

As The Washington Post reported, Oliver repeatedly made the outrageous claim that firing these seismic blasts every 10 seconds over a period of several months wouldn’t cause any problems for endangered animals like the North Atlantic right whale.

Rep. Joe Cunningham (D-SC) wasn’t having it. After the seemingly endless back and forth with Oliver, Cunningham busted out a 12--decibel horn and blastic it just feet from Oliver’s face.

“I don’t know exactly how loud it is. I actually never experienced it myself,” Oliver said.

Cunningham gave Oliver and the other people in the room a chance to cover their ears before letting loose the blast typically heard in stadiums or at the beginning of some hip hop songs.

“Was that disruptive?” Cunningham asked coyly.

“It was irritating, but I didn’t find it too disruptive,” Oliver said, just moments after literally covering his ears to protect them from the piercing sounds.

Cunningham then reminded Oliver that it’s only a fraction of what the whales and other marine life experience. Except it happens every 10 seconds for months on time.

Now, imagine trying to live your life with that kind of disruption happening for a seemingly endless amount of time from a source of which you have no knowledge or control.

And the thing is, this wasn’t just a stunt from a Democratic lawmaker opposed to another Trump administration policy. As the Post reported, every governor affected by the proposed changes has opposed them, including Republican governors, attorney generals and state officials.

The question is whether the Trump administration will listen to them or continue to blow their own air horn of environmental menace.