The Bible has a lot to say about great wealth and opulence and most of it isn’t positive. 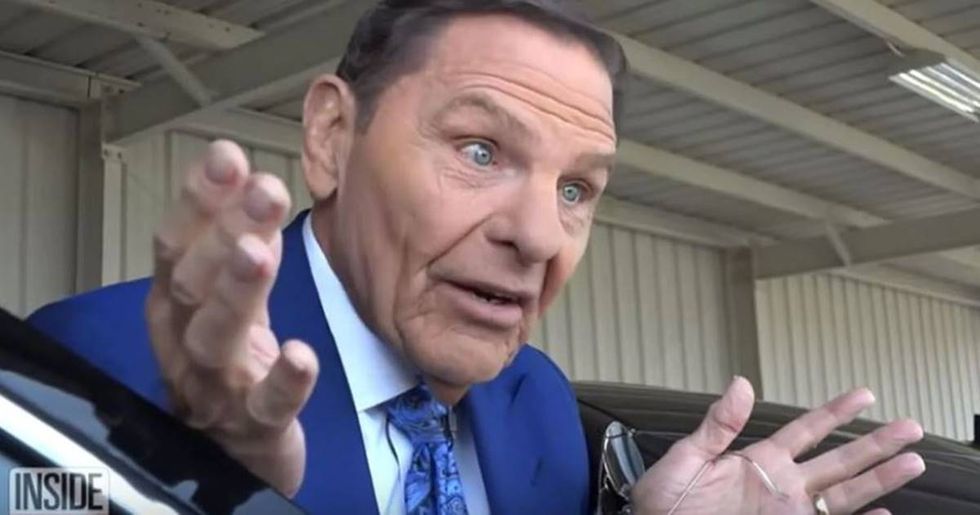 The Bible has a lot to say about great wealth and opulence and most of it isn’t positive.

“Then he said, ‘Beware! Guard against every kind of greed. Life is not measured by how much you own,’” Luke 12:15.

“Again I tell you, it is easier for a camel to go through the eye of a needle than for someone who is rich to enter the kingdom of God,” Matthew 9:24.

But none of this wisdom from the book he preaches matters to Kenneth Copeland. The prosperity gospel televangelist is worth approximately $750 million. He lives in a $6 million home owned by his church and jet sets all over god’s green earth in a $17.5 million private plane.

“Inside Edition” reporter Lisa Guererro ambushed the wild-eyed preacher and questioned him about his claim that commercial jets are filled with demons.

“Do you really believe that human beings are demons?” Guerrero asked. “No, I did not and don’t you ever say I did,” Copeland responded. However, there’s video proof of Copeland telling fellow televangelist Jesse Duplantis, “You can’t manage that today, in this dope-filled world, get in a long tube with a bunch of demons.”

Copeland later backtracked and addressed his comments, saying that commercial planes are not a good environment for preachers because of violent air marshals and people who drink alcohol. “Do you think that’s a good place for a preacher to be and prepare to go preach to a lot of people?” Copeland asked.

He also admitted that he owns three private planes.

Guerrero then pressed him on his flashy wardrobe, multiple homes, and limousines. “I’m a very wealthy man,” Copeland responded. “My wealth does not come from offering alone. I have a lot of natural gas on my properties. You didn’t know that did you, baby?” he said with a smirk. “Isn’t that wonderful?”

He then bragged about investing $25 million last year. “You can’t do that when you’re broke,” he said.

When asked about those who claim men of the cloth shouldn’t live luxurious lifestyles Copeland was blunt. “They’re wrong,” he said, flashing mile-wide grin reminiscent of the Chesire cat.

Copeland believes that the idea that preachers should be pious is a Biblical misunderstanding and that he was rewarded by God with great wealth. He backed it up with an anti-Semitic stereotype. “Do you think the Jewish people believe you should be broke?” he asked. “They believe in wealth.”

“Some people might think that is offensive,” Guerrero responded. “I’m not talking about ‘some people’ I’m talking about the Bible,” Copeland replied.

At the end of the interview, Copeland grabbed Guerrero’s hand and prayed for her.

The video has caused quite the sir on social media.

This video of televangelist Kenneth Copeland is one of the most disturbing things I’ve ever seen. Don’t watch it be… https://t.co/JNl1rNW5vo
— Shane Claiborne (@Shane Claiborne) 1559362217.0

I’ve been studying the rhetoric of Kenneth Copeland for over 10 yrs. That Inside Edition interview is the tip of th… https://t.co/LXmS1FdmMu
— Susie Meister (@Susie Meister) 1559347582.0