This congressman sued a Twitter account written by an imaginary cow. Now it has more followers than him 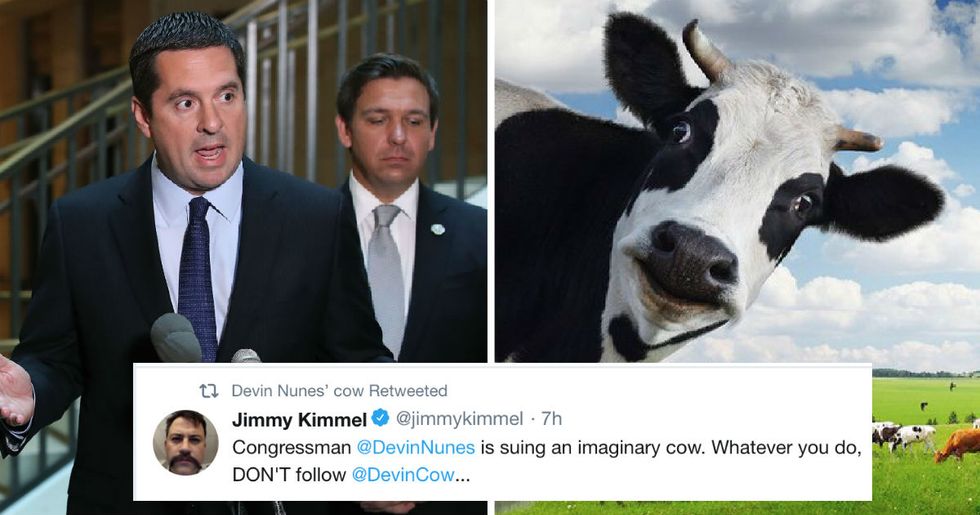 Nice try, David Nunes. The embattled lawmaker is mad as hell and isn’t going to take it anymore. He just absolutely draws the line at parody Twitter accounts written under the persona of a cow supposedly belonging to him and shooting off sick burns like calling the California Republican “udderly useless,” and a "treasonous cowpoke."

In his filing, Nunes alleges the imaginary cow has caused him "pain, insult, embarrassment, humiliation, emotional distress and mental suffering, and injury to his personal and professional reputations."

In case it wasn’t incredibly obvious, political parody is protected under the First Amendment of the Constitution. This lawsuit isn’t going anywhere except directly into the hearts of late-night comics and their viewers. Maybe Nunes hasn’t been watching “Saturday Night Live” the past three years.

Not only was the lawsuit entirely baseless, but it has also created a groundswell of support for everyone’s new favorite cow. Unlike some members of Congress, the numbers simply don’t lie.

Hi Devin, remember when this was the biggest thing you had your teets in a bunch over?? HAHAHAHA, nice work! Lates… https://t.co/NJFuoSJI8h
— FishingForTruth (@FishingForTruth) 1553118704.0

That’s right, a fake Twitter cow is taking its pretend owner on over the issues and winning in spectacular fashion.

The fake account is getting all sorts of attention from people like Jimmy Kimmel, MSNBC host Mika Brzezinski, ‘Ellen’ producer Andy Lassner who is coyly suggesting that people show up to a Nunes event just to “moo.”

If Devin Nunes thought a lawsuit would make all this go away, he’s sorely mistaken. If fact, not only is Devin Cow here to stay, another parody account written by Nunes “alt Mom” is ready to get in on the action: