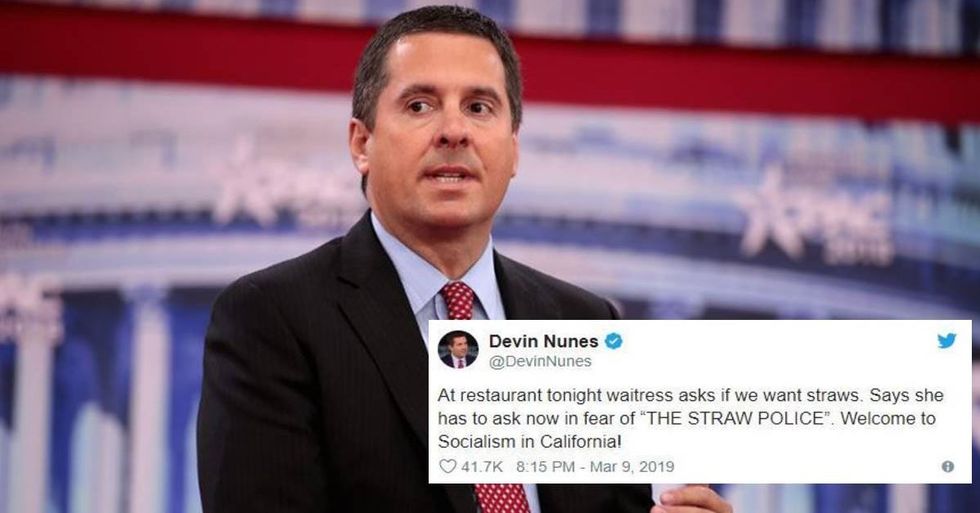 The world has a massive plastic problem. Currently, the Great Pacific Garbage Patch between California and Hawaii is twice the size of Texas and is in no signs of shrinking.

According to Strawless Ocean, t’s estimated we use over 500 million plastic straws every day in America, making up a significant part of the nine million tons of plastic trash that ends up in the world’s oceans and coastlines each year.

So reducing the number of plastic straws we use is a pretty darn good idea.

Our friend @chrisfiggener is a Marine Conservation Biologist and the woman behind the viral video of the turtle with the #plastic straw lodged in its nose. #WomensHistoryMonth

This video helped launch the global movement For A #StrawlessOcean. pic.twitter.com/3pP3Sipy34

California recently passed a law that prohibits sit-down restaurants from providing single-use plastic straws unless they’re requested. So customers can either sip out of the side of their cups or use a paper straw.

Heck, if they want a plastic straw all they have to do is ask.

The law is similar to a single-use shopping bag law recently enacted in California where supermarkets now charge for shopping bags. That forces people to either bring their own multiple-use bags or purchase a bag at the store.

Although it’s still too early to gauge the California ban’s effectiveness, similar policies have reduced plastic bag use by 70 to 80%.

Republican California Representative Devin Nunes lost his mind recently when a server had the nerve to ask him if he wanted a plastic straw. “At restaurant tonight waitress asks if we want straws,” he tweeted. “Says she has to ask now in fear of “THE STRAW POLICE”. Welcome to Socialism in California!”

At restaurant tonight waitress asks if we want straws. Says she has to ask now in fear of “THE STRAW POLICE”. Welcome to Socialism in California!

First of all, a law that doesn’t ban plastic straws outright, but kills the knee-jerk reaction to slip a straw in every beverage isn’t socialist.

However, some of America’s most popular government programs are socialist, from social security to medicare to publicly-funded schools and police. The U.S. military is essentially a socialist program where government employees are provided with free healthcare, living arrangements, food, and retirement benefits.

After his tweet, Nunes got dragged pretty hard for not knowing what socialism really means.

I hate to nitpick here but everybody getting straws was socialism. A waitress giving them to only people who want them is capitalism. It’s that whole supply-demand thing.

It has nothing to do with socialism or the economy. It has to do with stewardship of our planet. This crap is filling our oceans and contaminating and killing the marine life.

Yes. Its an environmental issue. But he disingenuously frames it as a socialist one. And somehow gets 20k likes... because they either don't understand the difference or applaud his effort to conflate the issue.

I’m not sure if the lack of any relationship between that and Socialism is the dumbest aspect of that tweet but it’s top five.

You clearly have absolutely no idea what the word "Socialism" means. It's got a specific meaning - it doesn't just mean "bad" or "stuff I don't like."

Socialism, you idiot, involves nationalization of industries, not local ordinances to reduce waste. As is so often true of this kind of tweet, it’s hard to know whether you’re so stupid that you believe this tripe, or if you know it’s inane but post it to appeal to stupid voters.

Then he got slammed because his family takes government farm subsidies. Government handouts? Sounds socialist.

BTW, did you have to ask for the government farm subsidies your family got, or were you just given them? Socialism?

Farmers in your district, including you, have received $459,790,000 in federal farm subsidies since 1975. But do tell me how keeping plastic out of the waste stream is socialism.

And then he got burned because single-use plastics are a pretty damn big problem.

Single use plastic such as straws, plastic soda cups and cutlery represents the greatest source of plastic pollution which was the focus of last year's United Nations World Environment Day which is held annually on the 5th of June.
So yeah the "Straw Police" are a good thing.

Amongst all of the tweet-flaming, somebody posted a pretty great solution to the plastic straw problem.

Real capitalism would’ve been charging him extra for the straws.

Real capitalism would’ve been charging him extra for the straws.

It might! We get charged for the reusable bags if we are too lazy to bring our own bags. Since CA has switched to reusable bags, I honestly don't see as many littering the ground now.

Absolutely! I love the bag charge! After all the whining subsided, people developed a new habit and now we just have reusable bags. Problem solved. Same thing will happen with straws, everyone will kick and scream like toddlers and then we’ll all be fine, because it’s no big deal