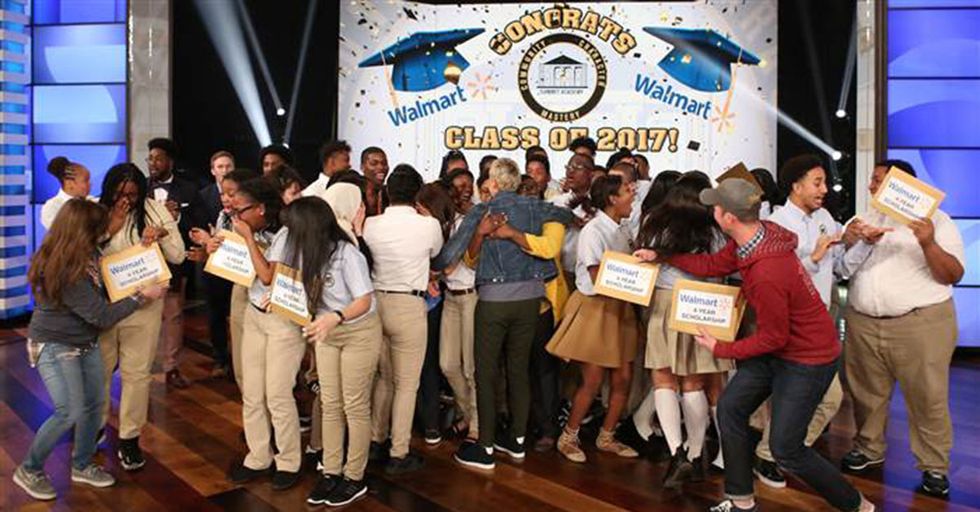 Several years back, Oprah raised the bar for gift-giving talk show hosts everywhere by giving a free car (if you ignore the $7,000 in taxes each recipient had to pay) to her entire studio audience.

But while handing out a staggering $7,000,000 in cars is nothing to scoff at, Ellen DeGeneres’ recent gesture on her show might be an even bigger gift, even if the cumulative price tag is millions less. Ellen, with financial backing from Walmart, surprised each high school senior (41 in all) at Brooklyn’s Summit Academy Charter School with a four-year scholarship to any state university in New York.

Ellen had previously expressed admiration for the school, situated in an impoverished neighborhood riddled with high crime and low graduation rates. Consequently, very few of the students, despite strong grades and attendance, were optimistic about affording a four-year degree. As the clip below shows, taken from an airing of The Ellen Show two weeks ago, the students often couldn’t afford lunches or clothes, let alone tuition.

Upon learning that their tuition will be covered by Walmart the surprised and elated students revealed that many will be the first in their families to attend college. Another student said, “College is the goal that I’ve had my entire life and now it’s going to happen,” he said. “It’s going to happen and I thank Summit for that.”

The two administrators of the school each received $25,000 for their impressive work under difficult circumstances. Perhaps even more rewarding than the cash is the offer from Ellen and Walmart to bring next year’s seniors by the show as well, suggesting that future classes may be gifted the same opportunity that these 41 kids were.