Georgia’s Special Election: What Does A Runoff Mean For 2018?

The outcome of the runoff is important for both parties, but especially for Democrats 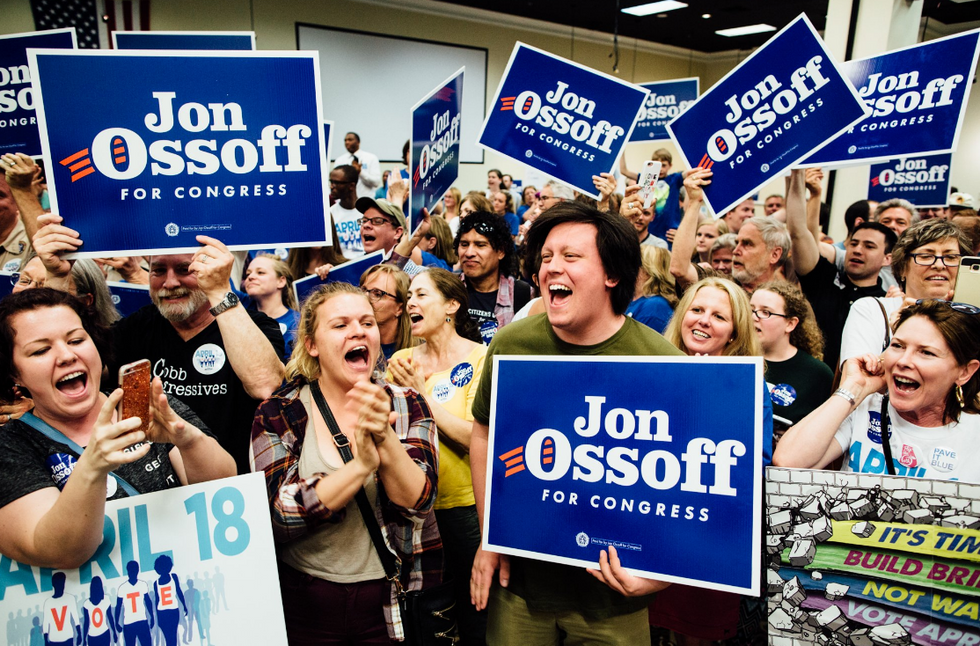 The past month has been fun for me.

Not only am I a political scientist who researches Congress and congressional elections, but I also live in Georgia’s 6th House District, which has been the focus of national attention for the past month or so. On April 18, the district held a special election to replace Tom Price, who left the House to become secretary of Health and Human Services.

The election was held under an unusual format known as a “jungle primary,” in which all candidates appear on the same ballot. In this format, if one candidate gets 50 percent of the vote, he or she wins the election outright. If not, the top two candidates appear in a runoff election.

The front-runner, Democrat Jon Ossoff, fell just short of the threshold. He won approximately 48.6 percent of the vote and will face the second-place finisher, Republican Karen Handel—who got almost 20 percent of the vote—in the runoff on June 20.

How did we get here?

At first glance, the Georgia 6th appears to be a solidly Republican district. It is located in the northern part of the Atlanta metro area, and consists of a diverse group of neighborhoods in parts of three counties. Cobb County is suburban, majority white and strongly Republican. DeKalb County is more urban in nature, strongly African-American and leans Democrat. Fulton, the same county where most of Atlanta lies, is also urban, but more evenly balanced politically.

In the past, the district has leaned strongly Republican. It hasn’t elected a Democrat to the House of Representatives since the Carter administration, and it was Newt Gingrich’s district when he was speaker of the House of Representatives in the 1990s. Republican Mitt Romney won 60.8 percent of the district’s voters in the 2012 presidential election, and more recently Tom Price got 61.6 percent of the vote and won reelection to the House by 23 points.

But, even from the beginning of the special election campaigns, there have been signs that the district is changing. For one, Price’s vote margin from last November is a bit deceiving. His Democratic opponent spent zero dollars on the campaign and still managed to win 38.4 percent of the vote. He also benefited from the fact that incumbents always do better than challengers in elections because of their increased name recognition and media exposure. Scholars debate how much incumbency is worth, but most estimates put it at between four and eight percentage points. Either way, a Republican other than Tom Price has a handicap compared to Price running for reelection.

A second positive sign for Democrats is that, even though Romney and Price ran strong in the district, this past November, Trump beat Clinton by only 1.5 percent there.

Finally, presidential approval has a strong influence on down-ballot races like this one. Trump’s approval is low, hovering around 40 percent nationally.

What does this mean going forward?

Taken together, everything seemed to point to this race being tight, and that’s exactly what happened. Ossoff’s strong first-place showing is nice for Democrats, but not a true indication of where the district is, or what will happen in the runoff on June 20.

A much better indicator is the total number of votes for all Democratic and Republican candidates, respectively. And these numbers are pretty close. Ossoff was a runaway first-place finisher with 48.6 percent of the vote, but only because he locked up nearly all of the Democratic support in the district. All other Democratic candidates got less than 1 percent of the vote altogether. On the other side, the four main Republicans in the field split 48 percent of the vote among them. This means Georgia will likely be treated to another close election on June 20.

The outcome of the runoff is important for both parties, but especially for Democrats. The Georgia 6th is part of their effort to win a majority in the House in 2018. It’s not exactly a must-win district for Democrats, but failing to pick it up would be a bad sign. To gain a majority in the House, Democrats need 25 additional seats. They currently hold 193, and 218 is a majority. In 2018, they will almost certainly target the 24 Republican seats where Clinton out-polled Trump in 2016.

The Georgia 6th is not in this category, but it’s close— gain, Trump won the district by only 1.5 percent. And other conditions are more favorable for Democrats in the 6th than they will be elsewhere. Ossoff raised a staggering $8.3 million for a House race, and the Republican incumbent isn’t defending the seat. Democrats probably won’t see such favorable conditions in districts as moderate as this one.

On the other hand, it’s important to not read too much significance into the outcome of a single race. Rather than bellwethers, special elections historically tend to be determined by the same factors and influences as normal open seat elections. They just happen to take place at an unusual time in the calendar.

There’s a year and a half between now and November 2018. A lot of things we can’t currently anticipate will happen in the interim and influence those races.