Don’t fall for this nonsense. 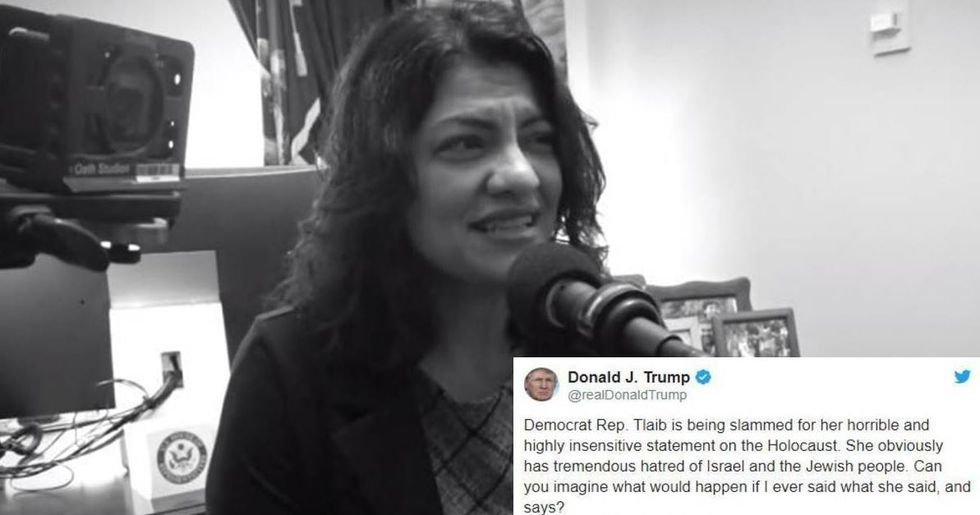 Democratic Representative Rashida Tlaib of Michigan, the first Palestinian-American woman ever elected to Congress, appeared on Yahoo’s “Skullduggery” podcast on Friday. During the discussion, she commented on the Holocaust and how it relates to the neverending conflict between Jews and Palestinians in Israel.

There’s kind of a calming feeling, I always tell folks, when I think of the Holocaust and the tragedy of the Holocaust and the fact that it was my ancestors — Palestinians — who lost their land and some lost their lives. Their livelihood, their human dignity, their existence in many ways have been wiped out and some people’s passports, I mean just all of it, was in the name of trying to create a safe haven for Jews post the Holocaust, post the tragedy and horrific persecution of Jews across the world at that time. and I love the fact that it was my ancestors that provided that, right? In many ways. But they did it in a way that took their human dignity away, right? And it was forced on them. and so, when I think about a one-state, I think about the fact that why can’t we do it in a better way? And I don’t want people to do it in the name of Judaism, just like I don’t want people to use Islam in that way. It has to be done in a way of values around equality, and around the fact that you shouldn’t oppress others so that you can feel free and safe. Why can’t we all be free and safe together?

Anyone who reads the entire comment can easily see that Tlaib was simply praising her Palestinian ancestors for creating a “safe haven for Jews post the Holocaust” while advocating for freedom, safety, and equality for all involved. She was also clear to note that it was outside forces that created Israel but also said it gave her a “calming feeling” to know the survivors of such historic oppression and violence had a safe space to call home.

However, Republicans, including President Trump, mischaracterized her comments as being anti-Semitic. Some went so far as to say that Talaib said the Holocaust gives her a “calming feeling.”

Democrat Rep. Tlaib is being slammed for her horrible and highly insensitive statement on the Holocaust. She obviou… https://t.co/rVyDfxQ4xt
— Donald J. Trump (@Donald J. Trump) 1557756558.0

Republican Whip Steve Scalise also perpetuated the gross mischaracterization with a statement on his website.

“There is no justification for the twisted and disgusting comments made by Rashida Tlaib just days after the annual Day of Holocaust Remembrance,” Scalise wrote. “More than six million Jews were murdered during the Holocaust; there is nothing ‘calming’ about that fact.”

It’s like the GOP forgot that the president once characterized a group of white nationalists who chanted “The Jews will not replace us” as “very fine people.”

Tlaib quickly came to her own defense and was joined by several prominent Democrats.

Mr. President: Stop dividing the American people up by their religion, their race or their country of origin--and s… https://t.co/QpQwGS4loh
— Bernie Sanders (@Bernie Sanders) 1557775891.0

House Majority Leader Steny Hoyer asked for an apology from Republicans. “If you read Rep. Tlaib’s comments, it is clear that President Trump and Congressional Republicans are taking them out of context,” Hoyer said in an email. “They must stop, and they owe her an apology.”

While Tlaib’s comments were in no way intended to be anti-Semitic, some criticized her for seeing history through rose-colored glasses. Analyst Aaron David Miller and CNN’s John King fact-checked Tlaib’s claim that Palestinians welcomed Jews with open arms.

This wasn’t the Republicans first attempt at smearing a Muslim representative by taking their comments out of context. Back in April, after a gunman opened fire at two Mosques and New Zealand, Omar made a speech that was criticized by Republicans for being dismissive of the 9/11 attacks.

Omar was simply attempting to distance her community from the acts of terrorists from across the globe and her comments were taken wildly out of context by the president who tweeted a disturbing video that made Omar out to be a terrorist.