These photos of a high school grad embracing her Dad at the border reminds us what’s at stake in the immigration debate.

Immigrants are our sons, daughters, parents and our families. 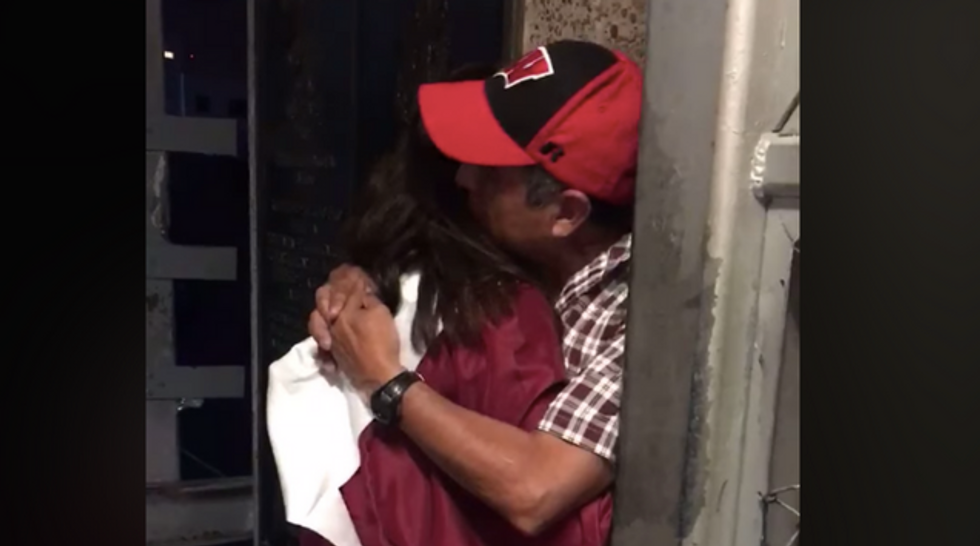 Like hundreds of thousands of other teenagers across the United States, Serai Merari Ruiz recently graduated high school. But one person absent from her ceremony at Hector J. Garcia Early College High in Laredo, Texas was her father.

Ruiz is originally from Wisconsin and has American citizenship. But a few years ago she moved with her mom to Mexico so she could grow up near her father, a Mexican citizen. Ruiz told the Laredo Morning Times that each morning she would cross the border into Texas to attend high school classes.

"When I was 4 years old my father was deported and we decided to move to Nuevo Laredo, to be close to him," Ruiz told the paper. "That's why I cross every day to go to school."

Even though she has been able to spend more time with her father, only her mother was able to attend the graduation ceremony since our nation’s immigration policies legally prevent her father from crossing into Texas, even to witness one of the most formative moments in his young daughter’s life.

"I graduated today. I tried so hard not to cry when we saluted our parents knowing that only my mom was there. I knew my father would never see me walk to get my diploma but today I’d thought I’d surprise him by crossing the bridge so he could see me with my cap and gown," Ruiz wrote in a Facebook post that has gone viral.

“I have to say that all my life I wondered if my dad would ever see me graduate..it started as not seeing him on Father’s Day then it continued to be a spiral of downhill emotions where I would only see him once a year.. and then things changed I moved to Laredo..and I got to see him every weekend..we bought a house and now I’d see him every day..today I can say that although we may have lost father and daughter time..I will always be grateful for his sacrifice to put his life at risk many times just to see me again.. gracias por todo papá.”

The video has been viewed more than 2 million times and shared by 35,000 people since Ruiz posted it just over a week ago.

Of course, some outlets have completely missed the point, such as this local Texas ABC affiliate whose story declared: “Texas graduate celebrates by hugging father at Mexican border.”

Ruiz told the station she’s the first person in her family to graduate high school and plans to attend college in the fall.

While it’s great that she was able to share the moment with her father, it’s a tragic reminder of the real toll our nation’s immigration policies takes on families. Someone like Ruiz who has shown an incredible commitment to her education and her family should be rewarded, not putting herself and her father in legal jeopardy just to share in a common celebratory moment so many others have the privilege of taking for granted.