Graffiti Artist Teams Up With Town to Build Creative Center, One Roof Tile at a Time

Creatives like Swoon and Shepard Fairey power a town’s economic engine through art—and how you can help. 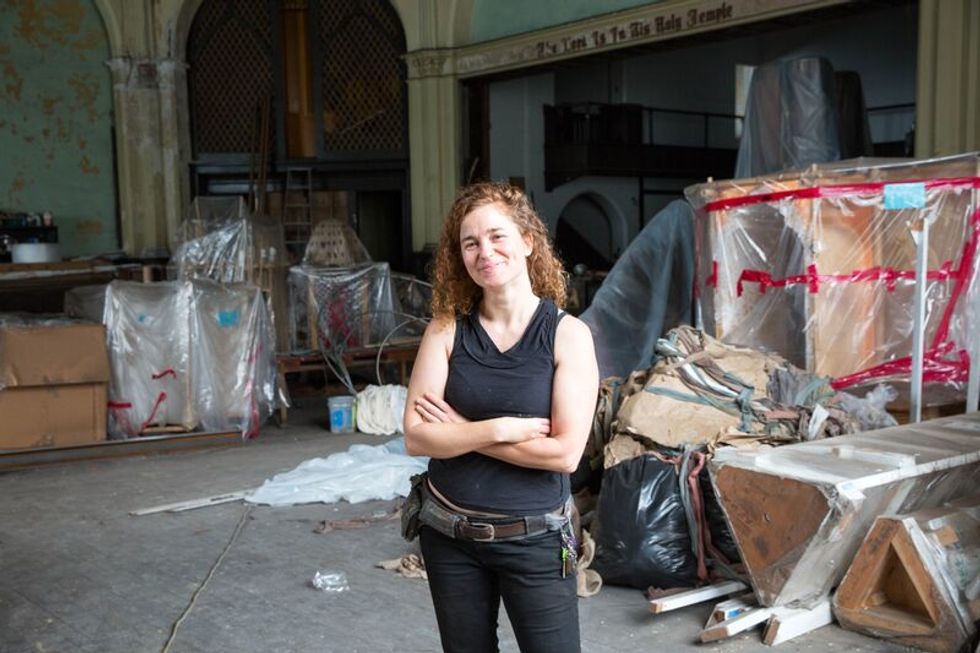 The artist SWOON (aka Caledonia Curry) poses inside the Braddock Tiles HQ.

For decades the former steel-mining town of Braddock, Pennsylvania, was emblematic of our nation’s biggest issues: economic decline, poverty, gentrification, the death of homegrown manufacturing, and income inequality. The town was the subject of a controversial Levi’s ad campaign, inspiration for a MacArthur genius (and her powerful photographic work), and a major draw for young creatives looking for studio space. Whatever your feelings on Braddock may be, there’s no doubt it has been a catalyst for bigger things. Now, it has also become the site of Braddock Tiles: a 15,000-square-foot abandoned church in North Braddock turned into a small business, art center, and economic engine.

The project is spearheaded by artist Caledonia Curry—better known as Swoon—who would also like to turn the space into a ceramics workshop, and has launched a Kickstarter this month to help. If Swoon can raise $50,000 she can hire and train locals to hand-make the 20,000 tiles needed to weatherproof the church’s crumbling roof. Braddock Tiles comes as part of Swoon’s Heliotrope Foundation, a nonprofit that has so far created two sister projects in Haiti and New Orleans, and counts Philadelphia Mural Arts Program director Jane Golden and recording artist Swizz Beatz as board members.

The exterior of Braddock Tiles HQ.

Swoon and her friends were initially drawn to the area by local government’s call for urban farmers to revamp the town’s vacant lots. “While working on an art installation in North Braddock, PA, we fell in love with this incredible abandoned church,” Swoon wrote on the Kickstarter page. The Braddock Tiles project began in 2009 when Swoon acquired the space, and since then she has been working with local residents to stabilize and protect the building. “It was slated to be demolished within the year. We felt that the potential this space held—the ways it could bring joy and opportunity to the neighborhood—was too great to let the bulldozers roll in.” The project also has personal significance. “As artists who spend our lives attempting to build spaces that induce wonder and bring people joy, we felt we were the right people to work together with friends and neighbors in North Braddock to help invent a new life for the building. Our goal is to reopen this building as a living work of art that is in service to its neighborhood.”

Swoon hopes that once the workshop is up and running she can hire young people from North Braddock full-time, and train them to make the ceramic tiles by hand. In addition to colorful roofing tiles, they’ll create and sell interior and decorative tiles, partnering with artists to release signature editions. Volunteers and new hires working on the tiles project will be under the tutelage of KT Tierney, a master ceramicist and the studio manager of the Braddock Carnegie Library’s Bath House ceramics studio. KT is also a ninth-generation Pennsylvanian who has lived and worked in North Braddock since 2011.

To raise funds for the project, Swoon has enlisted the help of more than 70 of her fellow artist friends (including Shepard Fairey, Dustin Yellin, Molly Crabapple, and Ricky Powell), who have donated images that have been printed digitally in unsigned editions of 250, then sold at $45 each. All proceeds from sales of these prints go entirely to the Braddock Tiles project. (You can see the full set of Braddock Prints by clicking here.) On October 14, Braddock Tiles also held a soiree, exhibition, and sale at Doyle Auction House in New York that included its first line of ceramic tiles. The exhibition also included Swoon’s signature “larger-than-life portraits” of Braddock residents.

If you’d like to help, an initial goal on Kickstarter of $50,000 is needed in order to renovate the church basement. The real dream, however, is to hit a stretch goal of $100,000, allowing the team to purchase kilns, mixers, shelves, clay, and other supplies—and hire their first team of apprentices.