Woman pens emotional note to parents who refused to attend her wedding.

When people choose intolerance over love, there are consequences. 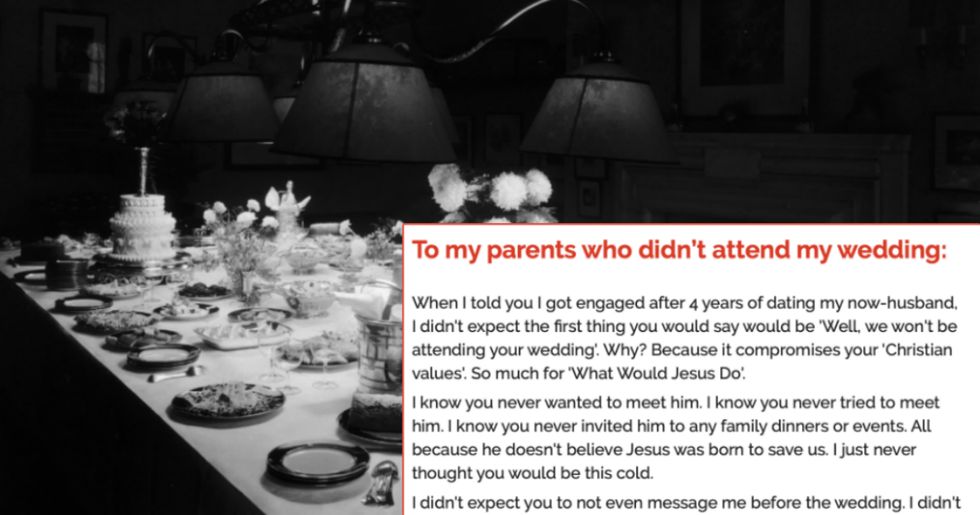 The Bible says that Christians shouldn’t marry non-Christians because they are “lawless.”

Do not be unequally yoked with unbelievers. For what partnership has righteousness with lawlessness? Or what fellowship has light with darkness? (2 Corinthians 6:14)

While this seems like a particularly narrow-minded way of seeing the world in 2018, there are still plenty of Christians who are against interfaith marriage because it conflicts with Biblical teachings.

There are even some who will stand by these beliefs even when it causes untold pain to their loved ones.

Redditor u/justakindvoice recently shared a heart-wrenching letter on the online forum that shares how she felt when her parents refused to attend her wedding for religious reasons.

The redditor says they didn’t attend because she married a man who “doesn’t believe Jesus was born to save us.” But she refuses to apologize for her new husband and for accepting his beliefs. “I will never apologize that I found a religion that brings me joy, peace, and acceptance of others that you don’t seem to practice.”

The letter appeared on r/TwoXChromosomes, a subreddit for women’s perspectives.

Here’s the letter in full:

When I told you I got engaged after 4 years of dating my now-husband, I didn’t expect the first thing you would say would be ‘Well, we won't be attending your wedding’. Why? Because it compromises your ‘Christian values’. So much for ‘What Would Jesus Do’.

I didn't expect my guest list to only include my fiance's family and our close friends.

I never expected not to have a father-daughter dance at the wedding.

I never expected not to have my mom help with choosing flowers, colours, and small details.

I never expected to tell the photographer to shorten our appointment because my family won't need pictures taken.

I never expected to walk down the aisle alone.

I’m so confused, so hurt, so angry.

I don’t know how to forgive you.

I get to spend the rest of my life with the kindest, most loving, most caring, most hilarious man I have ever met. It's your loss you refuse to let us in.

But damn, does this ever suck.

The letter received some passionate responses.

“I remember one day when I was much younger, my family was on our way to mass, already running a tad late, and the roads were covered in freshly fallen & plowed snow. We passed by somebody who was stuck on the side of the road, trying to shovel their car out alone. My sibling said shouldn’t we stop to help him out and see if he's OK? And my dad said I’m not stopping, we can't be late for church. Then my mom (figuratively) walloped him alongside his head and said that was the least Christian thing she’s ever heard him say. You bet your ass we turned that car around and helped the guy out. We still tease my dad about it to this day (20+ years later).

I'm very fortunate to have the family I have. Me & my husbands’ families are of different race & religion, and both were so supportive of our marriage. I couldn't be more thankful.

I'm so sorry you’re in this situation. I will never understand people who are so set in their religious ways that they will shut their family out. I hope one day they come to their senses and welcome you BOTH into the family.” — minidutch

Imagine enduring years of resentment, snide remarks, and tense dinners as your parents will never accept your husband. With their mentality, the two of you are better off without them pissing in your Cheerios. — Salsa_El_Mariachi

I am sorry your parents were such assholes.

Religion is important to people, i get that. I respect that. But there is NOTHING in the bible about not attending a wedding.

Your parents put an old book before their own child and that is not only sad, its disgusting —BeBa420