A marathon session of diplomatic wrangling and political grandstanding condensed into a more manageable supercut. 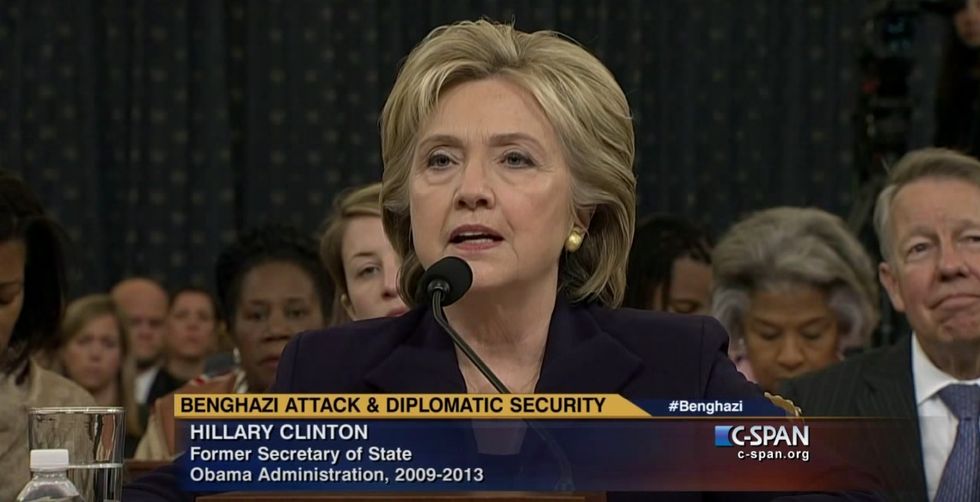 Like most people, odds are you didn’t spend the bulk of your Thursday glued to C-SPAN, watching Hillary Clinton field hour after hour of questions from the U.S. House of Representatives’ Select Committee on Benghazi—a committee ostensibly established to investigate the events leading up to to the deaths of four Americans in the U.S. diplomatic compound of the Libyan city, but which has been characterized by many (including some on the right) as having been impaneled solely to damage Clinton’s electoral momentum.

So, as Thursday’s proceedings starred perhaps the strongest contender in the 2016 presidential election, Clinton’s committee appearance took on an additional sense of importance. Not only was this the culmination of months of saber-rattling from both the left and the right, but the former Secretary of State’s testimony afforded the public an opportunity to scrutinize the White House candidate in action, beyond truncated debate sound bytes and little-changing stump speeches.

When all was said and done, however, the sheer enormity of the proceedings—11 hours in all—ensured that only the most die-hard political observers stuck around for the whole of Clinton’s testimony. Fortunately for the rest of us, there’s this: a fast-paced (well, for a House committee, at least) supercut of the day’s highlights, condensed into a much more manageable 3-minute overview, thanks to The New York Times:

Broadly speaking, the prevailing sense among observers is that Clinton not only weathered her marathon grilling, but managed to come out the other end with a bit of wind in her political sails, having projected an air of measured—maybe even presidential?—control over the course of the day’s heated exchanges. Whether Clinton’s appearance, and the relative lack of substantive new information to come from her testimony, will be enough to put Benghazi in the candidate’s political rearview mirror remains to be seen.

Should you have the time and inclination, The Washington Post has the entirety of Clinton’s appearance in front of the House Select Committee on Benghazi transcribed here. You can also watch Clinton’s opening remarks, below: