Art Ripped from the Headlines

#Ferguson, a collection featuring portraits of protesters rendered in charcoal and watercolors. 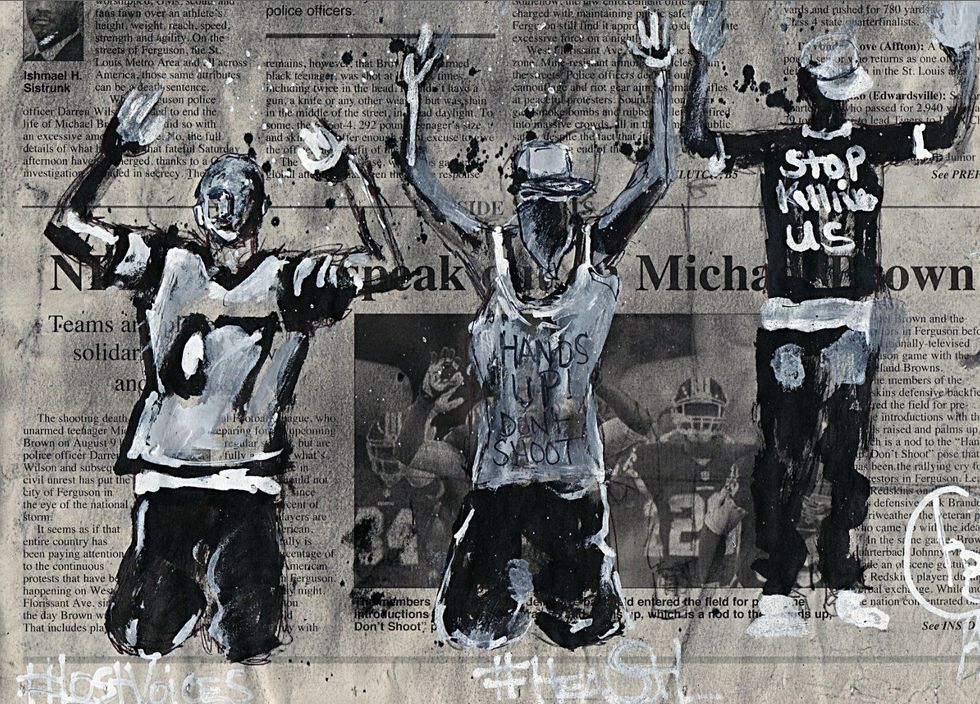 “People see these faces and all they see in these faces is angry violent faces, when in actuality all they’re doing is standing there and saying, ‘I wanna live, I have a right to live,’” artist Howard Barry told the BBC.

The St. Louis-based artist uses pages of the St. Louis American newspaper as the main medium for a series of paintings inspired by the fatal shooting of 18-year old Ferguson resident Michael Brown by police officer Darren Wilson and the massive protests that followed. Titled #Ferguson, the collection features portraits of protesters rendered in charcoal and watercolors.

“It was just that nasty reality that, if you are a young black man, any encounter you have with law enforcement could possibly be fatal,” Barry said in his BBC interview. “My therapy is often to draw. Rather than to try to debate with everybody and try to explain to them what I’m feeling, I put it down on paper.”

In the paintings, Barry’s protesters often have their hands raised, wearing shirts that declare “hands up, don’t shoot,” a phrase that has become a popular protest chant on the streets of Ferguson and in solidarity demonstrations. In one painting, he depicts the image of Michael Brown's father wailing with anguish at his son’s funeral. Barry has also drawn portraits of personalities who have become prominent on the streets of Ferguson, like St. Louis Alderman Antonio French and hip hop recording artist Talib Kweli. In other renderings, he’s sketched the image of Martin Luther King, Jr., on top of St. Louis American headlines about the Ferguson protests and Michael Brown’s death.

“Going through the paper and some of the images that I had in mind, the headlines and the articles seemed to be a perfect fit,” Barry told the newspaper. “I had to go get more copies of the papers, because once I started with them, they just kept coming.”

He grew up in neighboring Kinloch, a poverty-stricken community that, according to Barry, now looks like a “ghost town.” Kinloch experienced white flight in the early 20th century, after large numbers of blacks began moving in. It was one of the oldest black-majority towns in Missouri until the town was razed in order to expand the Lambert-St. Louis International Airport.

“I grew up knowing that there were people who for arbitrary reasons put a bull’s eye on me,” he told the St. Louis American. “My dad wouldn’t let me go into Ferguson or Berkeley or the surrounding areas for that reason. He was constantly coaching me on what to say when I encountered those officers and made me aware that my life was on the line.”