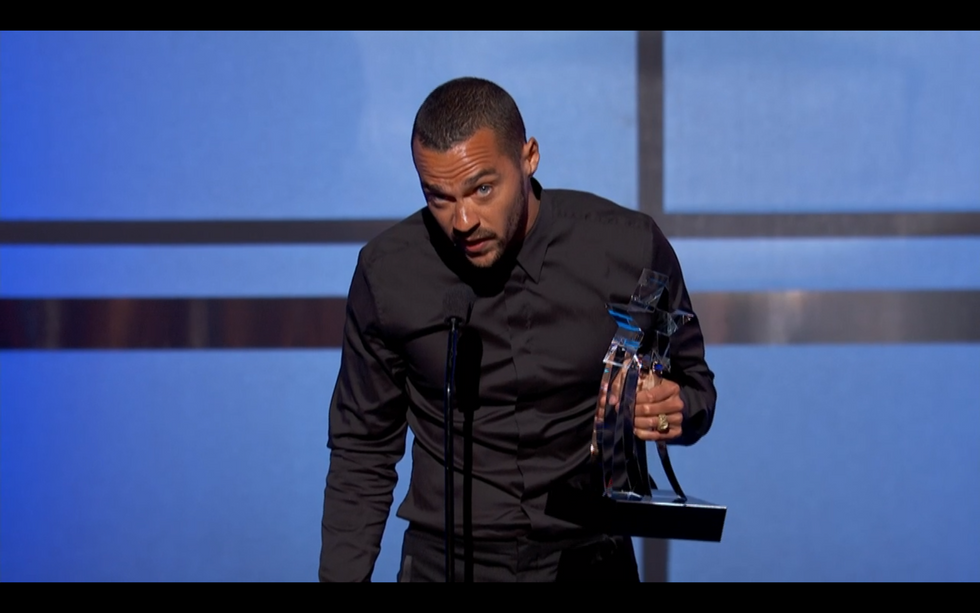 On Sunday evening, Jesse Williams changed the game for acceptance speeches everywhere with a truly special message on the annual BET Awards.

During the show, 34-year-old Grey's Anatomy star Jesse Williams was presented with BET’s Humanitarian Award for his work in Ferguson, Missouri.

His speech starts out typically enough, with Williams thanking his wife and parents for their support. He then quickly ensures the audience that this humanitarian award, and his work in Ferguson, does not only belong to him but rather to the “activists, the civil rights attorneys, the struggling parents, the families, the teachers, the students that are realizing that a system built to divide and impoverish and destroy us cannot stand if we do.”

“Now, what we've been doing is looking at the data and we know that police somehow manage to deescalate, disarm and not kill white people everyday. So what's going to happen is we are going to have equal rights and justice in our own country or we will restructure their function and ours.”

His impassioned speech continues by pointing out that things have not become improved much for the black community in America. “Tell Rekia Boyd how it’s so much better to live in 2012 than 1612 or 1712,” he says. “Tell that to Eric Garner, Sandra Bland.”

“We've been floating this country on credit for centuries, yo, and we're done watching and waiting while this invention called whiteness uses and abuses us, burying black people out of sight and out of mind while extracting our culture, our dollars, our entertainment like oil—black gold, ghettoizing and demeaning our creations then stealing them, gentrifying our genius and then trying us on like costumes before discarding our bodies like rinds of strange fruit. The thing is though... the thing is that just because we're magic doesn't mean we're not real.”