Kamala Harris says her Department of Justice would have ‘no choice’ but to prosecute Trump.

“Everyone should be held accountable, and the president is not above the law,” 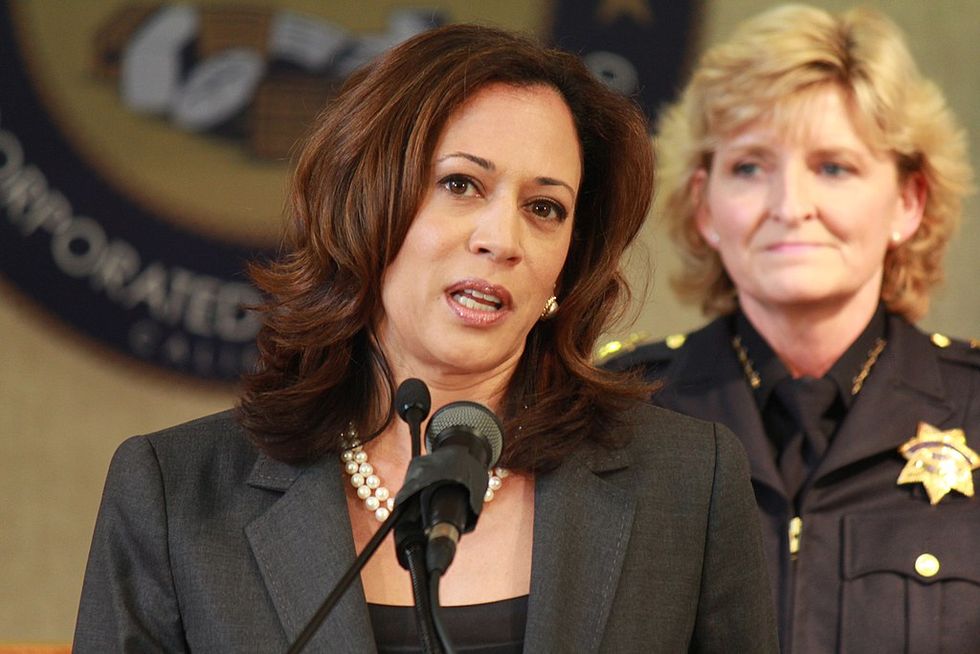 Senator Kamala Harris (D-CA) on Wednesday said the Department of Justice “would have no choice” but to pursue obstruction of justice charges against President Trump if he is not impeached and she is elected in 2020.

“Everyone should be held accountable, and the president is not above the law,” Harris told NPR’s Scott Detrow, also referencing her own background as a prosecutor.

In the primary field, Harris has levied her record as California’s former state Attorney General and her shrewd cross-examinations of congressional witnesses Attorney General William Barr and Supreme Court Justice Brett Kavanaugh to position herself as a kind of “law-and-order Democrat.” She has likewise taken flack from the party’s progressive left for her career in law enforcement.

“The facts and the evidence will take the process where it leads,” Harris said, explaining that she understands the Mueller report to have laid out grounds for criminal charges of obstruction of justice, but stopped short of returning an indictment due to longstanding departmental policy.

The interview followed Harris’s address at the Iowa Democratic Party’s Hall of Fame Celebration, where she appeared alongside 18 of her fellow presidential hopefuls, reports the New York Times. The former San Francisco district attorney and California Attorney General concluded her speech by listing the 10 instances of obstructive conduct described in the Mueller report and vowing to “prosecute the case” (ie. remove the President from office via electoral defeat).

As notes Elana Schor for the Associated Press, Democrats have long lambasted the President for the supposed rhetorical politicizing of law enforcement and his specific calls for the prosecution of political opponents—ie. the “lock her up” chants first heard on the 2016 campaign trail—and now appear vulnerable to their own criticism.

Navigating questions of impeachment, House Speaker Nancy Pelosi is alleged to have in a June 5 meeting told caucus members she wanted the president “in prison.” Fellow 2020 Democratic hopeful Mayor Pete Buttigieg of South Bend, Indiana, when asked in late May, told the Washington Post he would not pardon President Trump.

In a June 12 piece, Lawfare’s Ben Wittes argues that candidates can only avoid further corroding such norms by refusing to answer questions about prosecuting (or pardoning) the president and explaining the importance of keeping law enforcement free from political interference. Legal experts somewhat widely echoed Wittes’ concerns.

“It’s unfortunate that she said that, because if she is elected, it will be important to restore the prior status quo before Trump,” Kathleen Clark, a government ethics expert at Washington University in St. Louis School of Law, told Mother Jones, “where presidents don’t tell the Justice Department who to prosecute.”

In an interview aired June 14 with ABC News’ George Stephanopoulos, the President replied: "Oh, give me a break. She's running for president. She's doing horribly. She's way down in the polls.”

The Harris campaign responded by reiterating its position.

"Donald Trump is using the Department of Justice to run interference on his own behalf, and he's appointed an Attorney General to act like his personal defense lawyer, not the lawyer for the American people. Senator Harris believes no one is above the law, not even the President of the United States, and as president, she would restore an independent DOJ that values the rule of law and follows facts and evidence wherever they lead," Ian Sams, Harris' national press secretary told ABC News in a statement.

---Note: Some tweets to embed from angry lawyers taking umbrage

This highlights a central concern I've had:once norms are destroyed, it's very hard to put them back in the bottle.… https://t.co/0RbJtJndgN
— Neal Katyal (@Neal Katyal) 1560364553.0

Presidential candidates should not express their opinion as to whether Trump should be indicted after he leaves off… https://t.co/lTXVDni76n
— Renato Mariotti (@Renato Mariotti) 1560346041.0

Sure, we will concede to probably use this rando, “mandatory resistance” for the curiosity gap, over an image of Harris, or a split of her and President Trump: