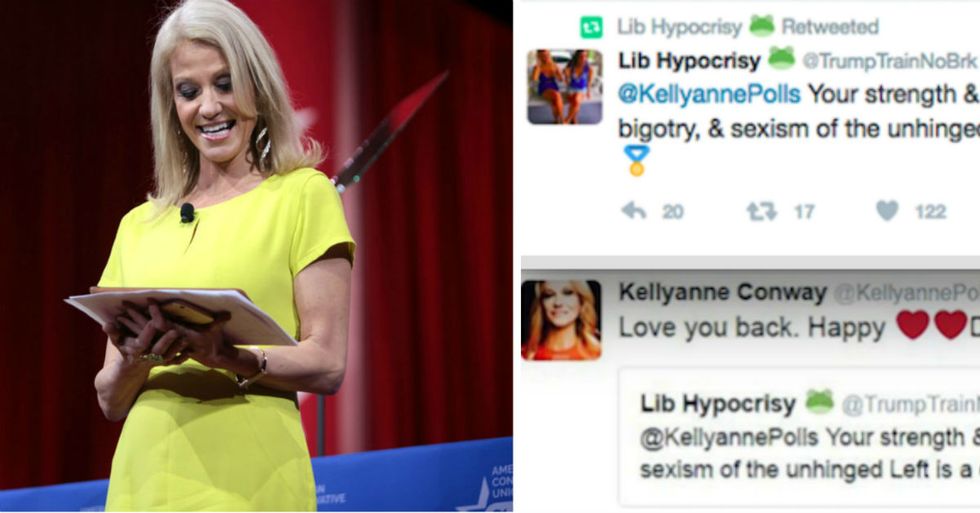 It’s been a very bad week for the White House. And the week is just getting started.

Trump adviser Kellyanne Conway hasn’t been immune from the controversy, and potential ethics violations, with her strange endorsement of Ivanka Trump’s clothing line from within the walls of the White House. But now she has perhaps an even more awkward bit answering to do after it was revealed her Twitter account sent a “love you too” message to an open white nationalist.

The embarrassing exchange occurred after Conway was being interviewed by NBC’s Matt Lauer in the aftermath of former National Security Adviser Michael Flynn’s resignation. Lauer was tough on Conway, even going so far as to say her answers “made no sense” in regards to Flynn’s actions and what members of the Trump team knew about his connections to Russia.

Afterward, Conway received a supportive tweet from a user going by the name “Lib Hypocrisy” which read: “Your strength and resiliency in face of vile hatred, bigotry & sexism of the unhinged Left is a daily inspiration! Love you!”

So, it immediately became highly suspect when Conway replied to the tweet with gratitude, writing, “Love you too. Happy [Valentine’s Day] to the Hapless Haters.”

After BuzzFeed took notice of the Twitter account’s origins, Conway did a 180, denying that she ever sent the tweet, telling the site: “I don’t know who had access to my account,” adding she would “see” whoever sent the “terrible” message.

In the understatement of this still very young week, Conway added,

“I denounce whoever it is,” referring to the Lib Hypocrisy account. “It will be immediately deleted. Everybody makes mistakes.”