The irony was just too much 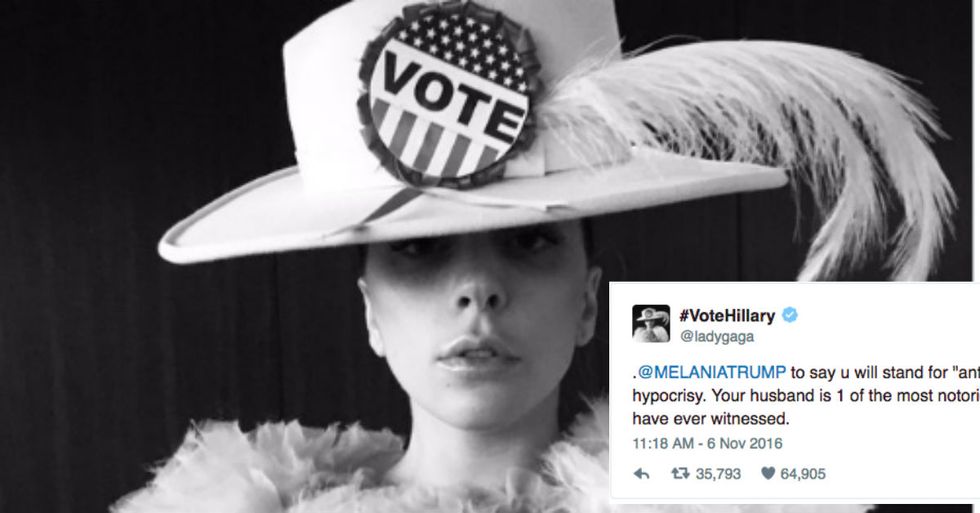 The political world was a little stunned to see Donald Trump’s wife Melania deliver a speech in the closing days of the 2016 election. After all, it turned out her perfectly nice sounding public remarks at the Republican National Convention turned out to be heavily plagiarizeed from a speech First Lady Michelle Obama gave years earlier.

But the content of Mrs. Trump’s latest speech was somehow even more bizarre as she told the world her role as first First Lady would be to stand up to bullying, particularly cyber bullying. Or, as the rest of the world knows it, Donald Trump’s entire modus operandi.

While most of us collectively looked on in stunned silence at what seemed like something of a performance art set piece, another artist decided it was time to speak out. With one simple tweet, Lady Gaga took all of Mrs. Trump’s promises about combating bullying and put them through the blender of truth, writing: “to say u will stand for ‘anti-bullying’ is hypocrisy. Your husband is 1 of the most notorious bullies we have ever witnessed.”

Lady Gaga is a very public supporter of Hillary Clinton, she even changed her Twitter name to #VoteHillary in the closing weeks of the campaign. She’s issued several direct challenges to Trump over twitter but this one aimed at Melania might have been her most poignant of all.

Gaga also took another compelling shot at Trump while appearing on a Japanese TV show. It’s not so much that Trump is a Republican, a conservative, or even a true-believer in any of the controversial stances he’s taken. No, Gaga says the most damning thing about Trump is how obviously fake it all is. And that might be the most dangerous thing about him as a candidate.

Because I’m a ‘celebrity,'” Gaga said during the interview, “I have insight into the type of person that Donald Trump is. The truth is that we ‘celebrities’ know that he’s an actor and that this is an act. We are standing with Hillary not just because she’s far superior as the choice for president, but we’re also standing with her because it would be a complete disaster to elect someone that is essentially a political imposter.”