In the face of the school’s abhorrent policy, Paula and Anjali are standing tall and proud 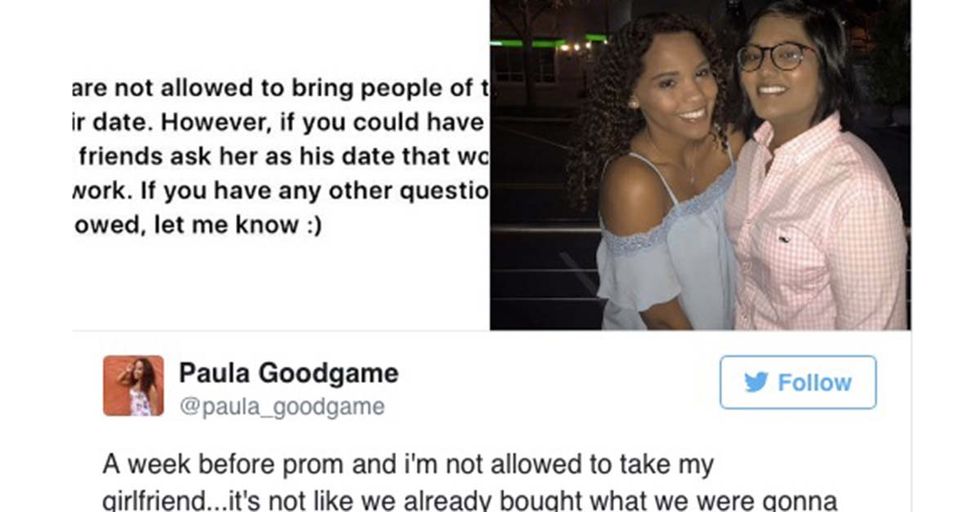 As so many teenagers are doing this time of year, 17-year-olds Paula Goodgame and her girlfriend Anjali Persad spent much of the past month gearing up for the biggest night of the school year—prom. Comfortably out as gay and dating for the past four months, they have been looking forward to spending the glamorous night together among their friends.

In anticipation of the big night, Paula emailed one of her teachers to confirm there would be no issue with two girlfriends attending prom together as a couple. When she didn’t get a response, she reached out to her guidance counselor, who came back with some very disheartening and upsetting news.

Paula and Anaji wouldn’t be allowed to attend prom together.

Their school, St. Petersburg Catholic High School, has a policy on the books that students are “not allowed to bring people of the same sexes as their date.”

It’s likely that the guidance counselor was trying to be helpful in finding a way for the two to attend prom (somewhat) together, but requiring a boy to take Paula’s girlfriend as his date is just as dismissive of their relationship and orientation as banning them outright.

Understandably, Paula was pissed and shared the development on social media.

Responses were swift and ranged from the indignant …

To suggestions of protest and activism …

@maddy_ayee Principal can be reached at bfernandez@spchs.org. Lets let him know this is completely wrong.
— lara (@lara)1490830584.0

To citations of the Pope’s words, in the event that policy is predicated on the school’s Catholic denomination …

@RR_KTK @paula_goodgame @anj_ovies “If someone is gay and searches for the Lord and has good will, who am I to judge?” - Pope Francis
— Exorcising Emily (@Exorcising Emily)1490876112.0

So far, there’s been no news or indication that the school is changing its mind on the matter, but the public outpouring of support (and consequential criticism of the school’s policy) has left Paula and Anjali feeling heartened and proud, even in the face of such systematic discrimination.

we never expected this..my girlfriend and I really do appreciate all this love and support..so a big thank you to e… https://t.co/Cw1hntiAVs
— paula maria (@paula maria)1490878629.0