Librarians are sounding off on annoying customers and it’s awesome hearing them vent.

There’s a specific type of customer that makes them nuts. 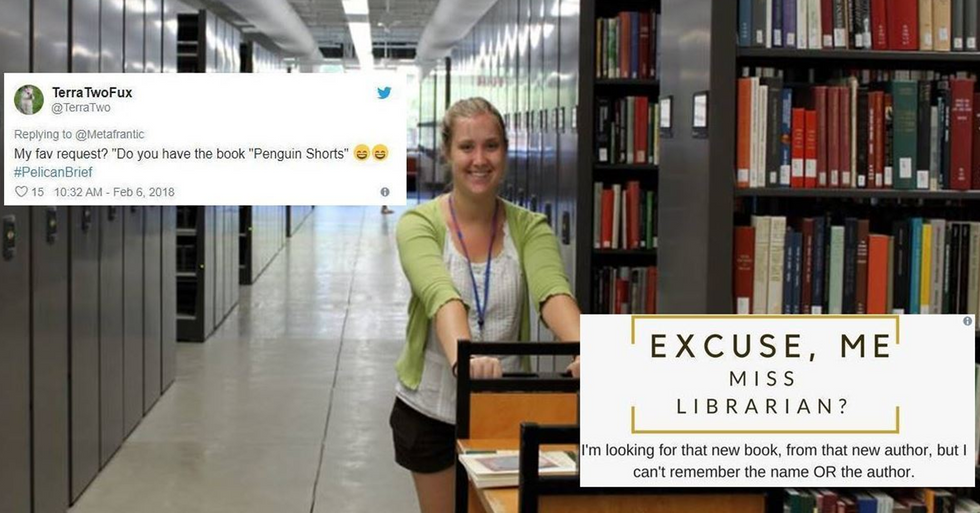 Customer service jobs always come with headaches. Servers complain about picky customers or those who don’t tip. Salespeople get frustrated by looky-loos who take up all their time and don’t buy anything.

And everyone hates the people who come stomping into the store demanding to “talk to your manager.”

A recent viral thread on Twitter shows that even librarians get fed up, too. @Metafrantic, a self-described “aspiring librarian,” started it by pointing out the specific type of customer who drives them nuts: people who don’t know the title of the book they’re looking for.

Evidently, among librarians, customers who can only describe the book they’re looking for by its size and color are more common than “Twilight” rip-offs in the Romance section.

When libraries troll their patrons. pic.twitter.com/Hn8a96f8je

Lolz my library did this too. I took a photo because we used to get this question all the time when I worked at a bookstore. pic.twitter.com/QDeZ8hvG0W

We decided to follow suit with a display of our own at work today #library#librarianspic.twitter.com/723BOJ0OJX

We did this over the summer and our patrons loved it!#librarylifepic.twitter.com/PRCpB2A4mf

Northern District branch of @torontolibrary is on top of their game pic.twitter.com/P6ENl4i83o

It happens in other countries, too.

People who have worked in libraries and bookstores got the joke and shared their customer service stories.

YEARS ago at Waldenbooks I relabeled the New Age shelf "Blue and White Books About Light." It took a few weeks but one day while at the register I heard it, from way in the back of the store: my manager giggling uncontrollably.

I worked in a bookstore. Oh, the stories I could tell. I won't though because they provoke flashbacks.

OK, one. The most stolen book is the Bible. Go figure.

We had a customer service training once where I RPd a "bad example." My response of "You should ask Bob, he handles the green books" stopped the class for a while.

Customer: "It's this big," *indicates with hand gestures* "and it's red."
Me (Bookseller): "It's 'The Dangerous Book for Boys'."
Customer (unaware that I'd sold 15 copies that morning as it was the book du jour): "YOU'RE A WIZARD!"
Me: "A BOOK WIZARD!"

My proudest moment was working in an episcopal library of 200,000 books, someone asked for 'that book about bishops with a yellow cover' and I got it straight away *even though it was purple*

What drives me crazy is: "You had this book on display last week. I don't remember the title"

One of my proudest moments as a bookseller: “I don’t know the author or the title, but it’s about New York and construction?” I handed the guy a copy of The Power Broker. “OMG this is it!”

My fav request? "Do you have the book "Penguin Shorts" #PelicanBrief

HaHaHaHa - Sadly - I've gone to the library looking for a certain book and said something like that!! pic.twitter.com/3VWm9HfDSa

When I was in library school, we used to say we were going to open an experimental library. Forget Dewey and LC. We'd arrange the books by color and size!