“I’ve known Louis forever, I’m not making excuses for him...” 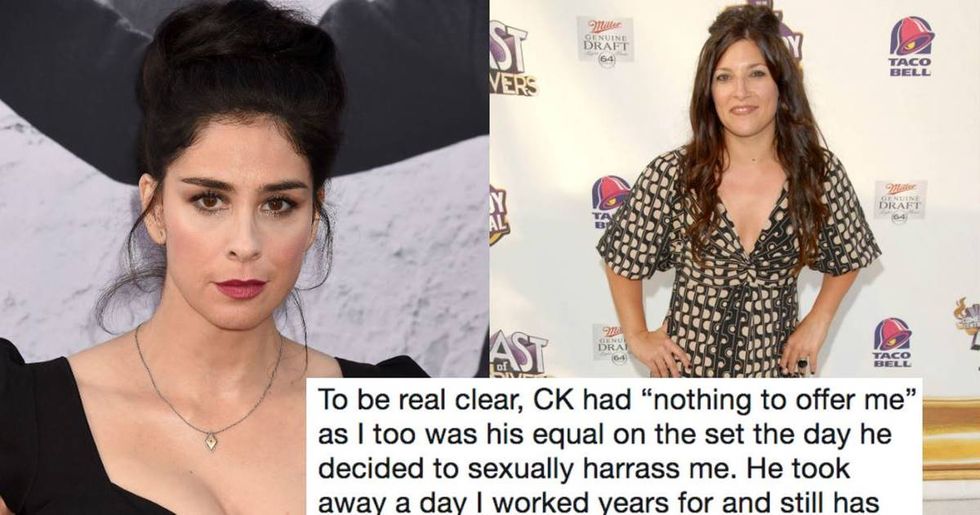 In case you missed it, during a recent appearance on “The Howard Stern Show,” comedian Sarah Silverman revealed Louis C.K. consensually jerked off in front of her. She shared there were times when C.K. would ask permission to jerk off in front of her, and she’d say yes, while other times she’d decline and he’d abide.

Silverman also went on to clarify that her experiences were “not analogous” to the other women C.K. masturbated in front of — for one, she gave consent, but also — the power dynamic was different.

This is what she told Stern:

“I don’t know if I’m going to regret saying this. I’ve known Louis forever, I’m not making excuses for him, so please don’t take this that way. We are peers. We are equals. When we were kids, and he asked if he could masturbate in front of me, sometimes I’d go, ‘F— yeah I want to see that!’ … It’s not analogous to the other women that are talking about what he did to them. He could offer me nothing. We were only just friends. So sometimes, yeah, I wanted to see it, it was amazing. Sometimes I would say, ‘F—ing no, gross,’ and we got pizza.”

While it should be noted that Silverman was prompted to talk about C.K., and didn’t offer this information out of nowhere, her words still rubbed some the wrong way.

I don’t doubt her experience was consensual, and clarifying that her experience was not analogous to the women C.K. harassed and traumatized was key, but the playful dialogue around a sexual predator who has faced zero long-term consequences wasn’t well received across the board.

To be real clear, CK had “nothing to offer me” as I too was his equal on the set the day he decided to sexually harrass me. He took away a day I worked years for and still has no remorse. He’s a predator who victimized women for decades and lied about it. https://t.co/xrfI6HwXqx

“To be real clear, CK had ‘nothing to offer me’ as I too was his equal on the set the day he decided to sexually harrass me. He took away a day I worked years for and still has no remorse. He’s a predator who victimized women for decades and lied about it,” Corry wrote.

Silverman was quick to respond with both empathy and remorse, stating she now regrets what she said. She also noted how difficult it is to do press tours without being asked about C.K.

Rebecca I’m sorry. Ugh this is why I don’t like weighing in. I can’t seem to do press 4 my show w/out being asked about it. But you’re right- you were equals and he fucked with you and it’s not ok. I’m sorry, friend. You are so talented and so kind.

Corry responded to Silverman with gratitude and solidarity over the difficulties of being a woman in the public eye, and a woman in comedy.

Thank you. I know exactly how you feel. I can’t seem to live my life without getting rape & death threats, harassed & called a cunt regularly for simply telling the truth. I’m sorry your friend created this situation. We deserve to do our art without having to deal with this shit https://t.co/yK6xafdzur

This is honestly a horrible situation all around, C.K.’s female colleagues shouldn’t be held to the fire for his actions, especially when he himself is back on stage and facing minimal backlash from bookers and gatekeepers in the comedy community.

Silverman was sharing an anecdote only after being asked, and while her intention wasn’t to undermine the experience of Corry and the other women — it was spun that way in order to deflect from C.K. himself.

Sarah isn’t the enemy, folks. She’s a good human & ally who was asked about her life (re: a subject female comedians can’t seem to avoid in interviews) & she answered honestly if imperfectly & the whole thing was reduced on social media to the sentence you would hate the most.

This is yet another symptom of the misogynistic culture that enabled C.K.’s abuse of power in the first place. Hopefully, the more we talk about it, the more we’ll be able to dismantle it.