Obamacare Is Suddenly More Popular Than Ever 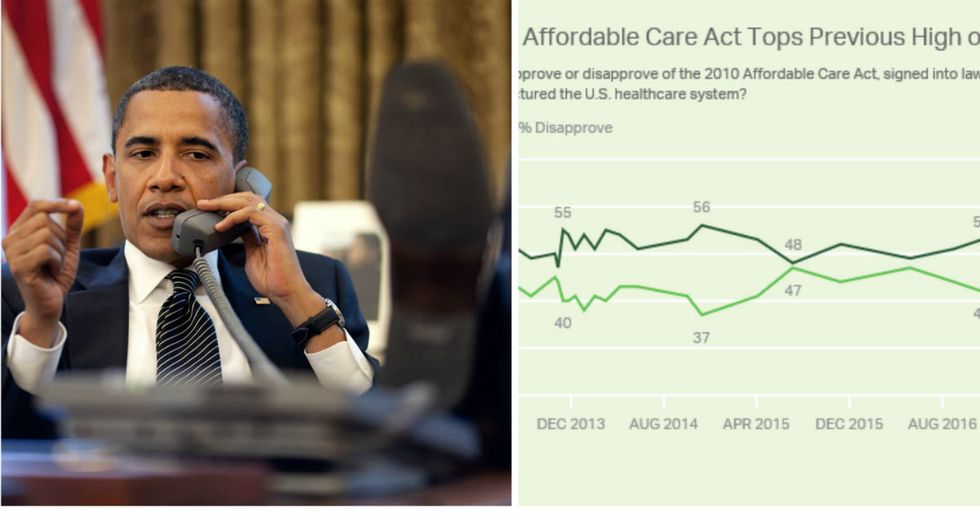 Obamacare is experiencing such a sudden upswing in health that you could be forgiven for thinking you signed up for some really great government insurance. After spending the last seven years on a constant deathwatch, President Obama’s signature piece of legislation is now enjoying support from a majority of Americans for the first time ever.

A new survey from Gallup shows that 55 percent of all Americans say they approve of the Affordable Care Act. That’s a huge increase over its tepid 42 percent support following the 2016 election. less than six months ago. It’s also the first time that 50 percent of respondents have said they approve of the national health care law since Gallup first began measuring public approval on the issue back in 2012.

So, when President Trump promised a great healthcare plan that Americans would love, he wasn’t lying. He just failed to tell us it was the plan we already have.

From the Gallup report: Republicans, Democrats, and independents are all more likely to approve of the ACA now than in November, a few days after Donald Trump's victory in the presidential election left Republicans in control of the legislative and executive branches.

It is self-identified independent voters who are leading the charge, with a 17 percent swing in favor of the law.

But that doesn’t mean it’s all roses. Even though a solid majority now “approve” of the law, 40 percent of respondents said they would still like to see “significant changes” to the law, while ultimately keeping it in place. Only 26 percent of Americans say they want to keep the law “as is,” while 30 percent said they want it repealed and replaced completely.

Still, those numbers are at odds with Republicans in Congress. In particular, the Freedom Caucus, the group of several dozen far-right conservative lawmakers, continues their push for a repeal and replace law that strips out even more of Obamacare’s leading components. However, a Thursday report says that the most recent attempts to bring Republicans together on a bill has once again gone up in flames.

In the meantime, it seems like Americans are getting more and more comfortable with the idea of Obamacare once they are faced with the prospect of potentially losing it.