Ted Cruz’s ridiculous ‘El Chapo’ idea is being ridiculed by everyone.

The drug lord was sentenced to life in prison earlier this week. 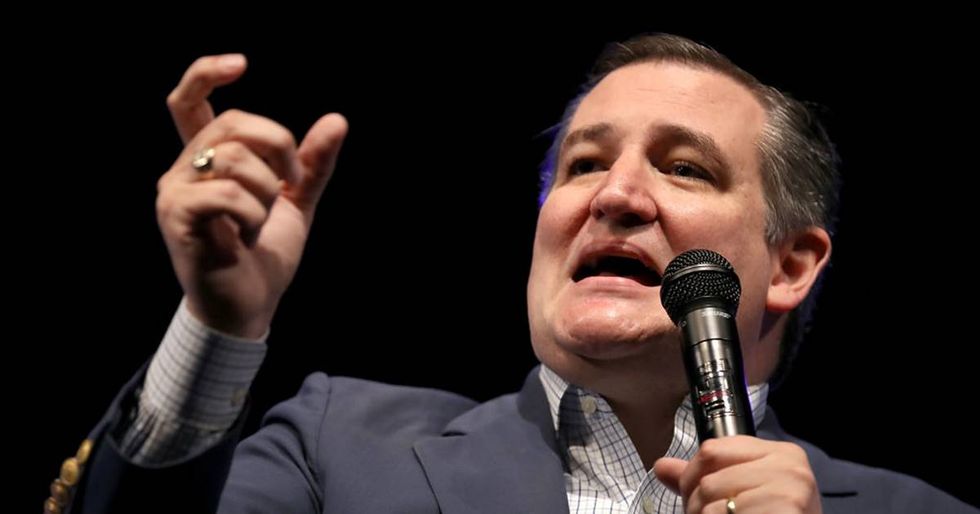 Two countries have already said they’re not going to pay for a wall on the U.S.-Mexico border, the United States and Mexico. So Senator Ted Cruz from Texas has proposed another way to wall funding: make Joaquin “El Chapo” Guzman pay for it.

The Sinaloa drug cartel leader was convicted on ten counts on Tuesday, including engaging in a criminal enterprise. The U.S. government plans to seek a forfeiture judgment for the property Guzman gained from drug trafficking which is believed to be worth over $14 million.

Back in 2017, Cruz introduced the Ensuring Lawful Collection of Hidden Assets to Provide Order Act which would use any “illegally obtained profits resulting from any criminal drug trafficking enterprise led by Joaquin Archivaldo Guzman Loera” for the purpose of securing the border.

In light of the fact that it appears Donald Trump won’t be getting any funding from Congress to build his wall, Cruz has called for Congress to consider the act once again.

(NOTE: The oddly-worded act is an acronym for “El Chapo.”)

America’s justice system prevailed today in convicting Joaquín Guzmán Loera, aka El Chapo, on all 10 counts. U.S. prosecutors are seeking $14 billion in drug profits & other assets from El Chapo which should go towards funding our wall to #SecureTheBorder. https://t.co/hPwEUVM6SP

It’s time to pass my EL CHAPO Act. I urge my Senate colleagues to take swift action on this crucial legislation. #SecureTheBorder --> https://t.co/SndC56CiYzpic.twitter.com/5LgBuBSE26

Even Trump’s reaction was like “Thanks, but no thanks.”

President Trump on Sen. Ted Cruz's (R-TX) suggestion that assets seized from Sinaloa drug cartel kingpin El Chapo could pay for the border wall: "It's always interesting, anything Ted does is interesting. That's certainly an interesting one." pic.twitter.com/Hw5Qg42QUp

One of the major reasons Republicans are calling for a wall is to prevent drug trafficking. However, “El Chapo’s” trial illustrated how a border wall would be ineffective at stopping the flow of illegal drugs from Mexico.

Under Guzman’s guidance, the Sinaloa cartel smuggled drugs into the U.S. by plane, train, automobile, submarine, boat, tunnel, and fake jalapeno cans — not by running across the U.S.-Mexico border.

Ted Cruz’s plan to “Build a wall and make ‘El Chapo’ pay for it” is getting ridiculed on Twitter, mostly because a wall wouldn’t have done anything to stop the drug kingpin from smuggling his goods into the U.S.

So you are going to use the money he made smuggling drugs with tunnels, planes and submarines to build a wall to stop his cartel? That will teach them.

Does everyone know he broke out of maximum security prison by digging a tunnel?

I also remember reading that some smugglers quite literally throw packets of drugs across fencing like footballs. Tunnels are super common, and many drugs are smuggled via water rather than land. “Illegal” immigrants usually overstay visas. Basically a wall is useless

Let’s just put pictures of Ted Cruz along the border. That will repulse anyone.

Sen. Cruz, As a believer in markets, you are aware that there will always be supply of drugs as long as there is demand for drugs, no matter what physical barriers there are.
Take that $14 billion and fund more safe injection sites, drug treatment and recovery programs.

If you are going to make El Chapo fund anything, how about making him fund our healthcare so that those addicted to deadly opioids can seek the treatments that they need to survive?

Ted Cruz's priorities are screwed up!

After all, the same guy you reference, El Chapo, owned planes. Submarines. Catapults. Tunnels. None of which would be in the slightest interrupted by a border wall.

Not to mention all the land vehicles that must have come through the ports of entry where there won’t be any walls pic.twitter.com/NBcH5pMJKQ

Mexico was supposed to pay for it, not el Chapo. You and El Presidente Naranja need to stick to your original story.