The gift and message serve as an example of not just love, but respect. 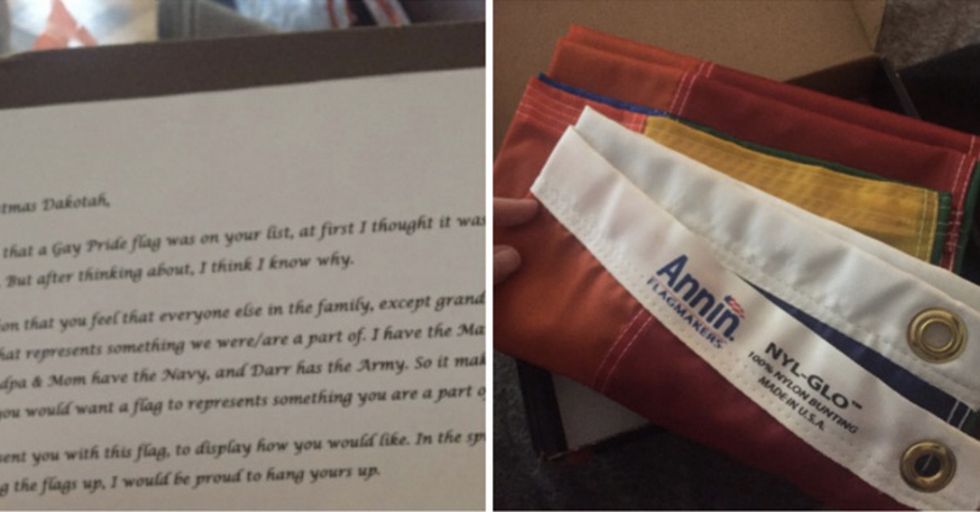 Deciding how and when to come out can be one of the biggest decisions a gay person makes. There’s no roadmap to doing it the “right” way, which can make it a stressful and overwhelming proposition before you even factor in the responses of your loved ones. However, the message this Marine sent to his daughter shows that the way we treat those who come out can go a long way towards ensuring that they don’t just feel comfortable when coming out, but loved and respected as well.

A girl named Dakotah from Ohio put a gay pride flag on her Christmas wishlist to her father, seemingly apropos of nothing. As you’ll see, it took him a moment to understand the request, but when he did, he offered a response that was both personal and warm enough that Dakatoh shared it online as a perfect example of what to do in this instance.

Here’s her tweet, timestamped bright and early on Christmas morning:

My dad got me the best Christmas present I have ever received this year. https://t.co/uGcvWdsUxI
— macaroni rascal (@macaroni rascal)1482678201.0

The note he sent along with her gift reads:

When I saw that a Gay Pride flag was on your list, at first I thought it was an odd request. But after thinking about [it], I think I know why.

I reckon that you feel everyone else in the family, except grandma, has a flag that represents something we were/are a part of. I have the Marine Corps, grandpa and mom have the Navy, and Darr has the Army. So it makes sense that you would want a flag to represent something you are a part of.

I present you with this flag, to display how you would like. In the spring, when I hang the flags up, I would be proud to hang yours up.

There’s not much to say in the wake of her dad’s message of understanding, and respect, but hopefully, the act itself is resonant enough that others will look to it when responding to someone coming forward in one of the biggest moments of their lives.

Fortunately, people are sharing the message so that it finds as wide an audience as possible: