The superhero world’s first-ever Muslim Pakistani-American teenage girl is the product of a creative mind and great mentors. 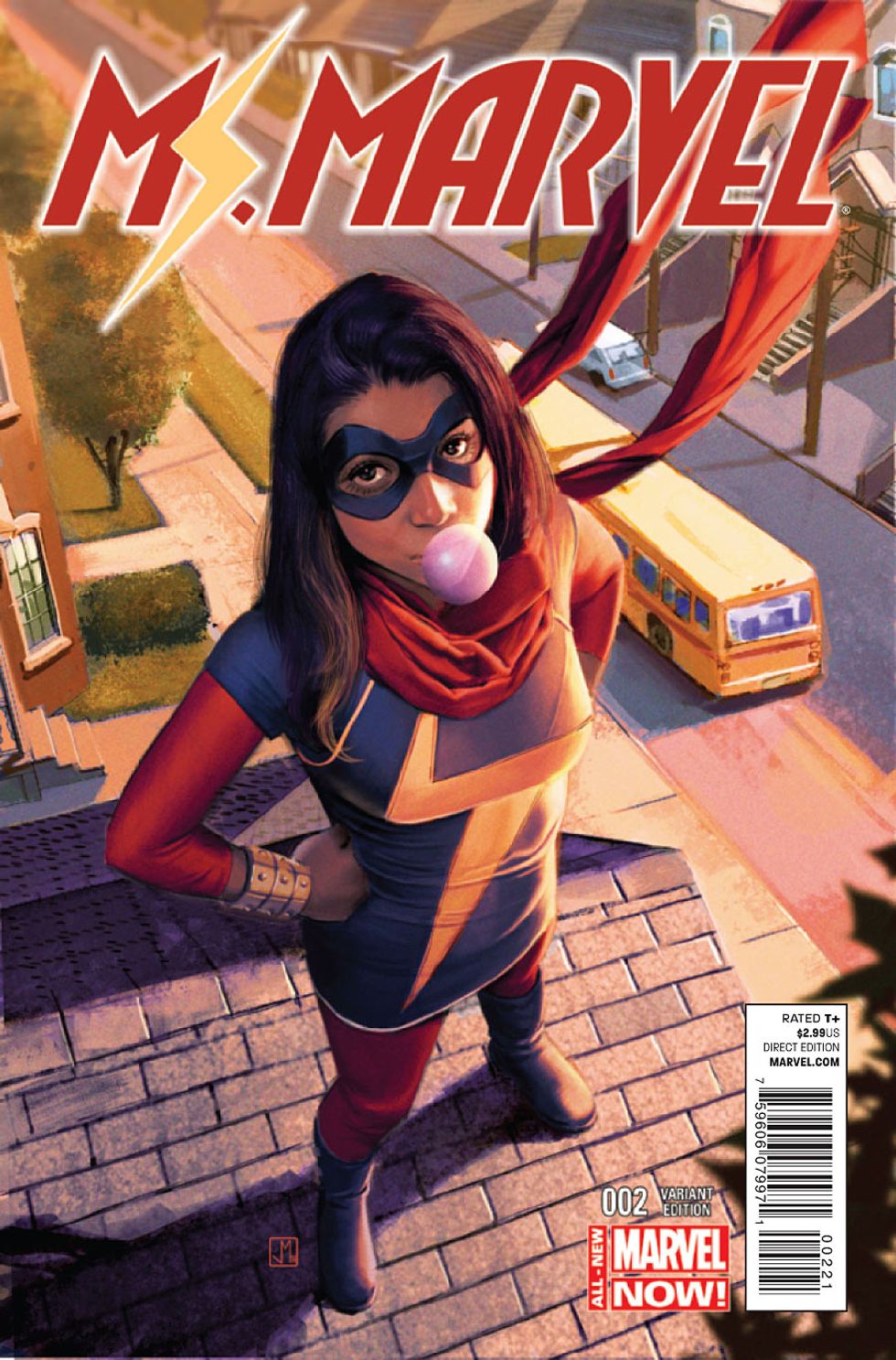 It’s undeniable that the majority of comic books are made by and for men. According to comics historian and researcher Tim Hanley—who regularly “gendercrunches” the industry’s demographics—male comics creators outnumbered female nine-to-one as recently as December of 2014. And last June, Hanley found that 79 percent of comic editors, inkers, pencillers, and cover artists were white, as well.

So to call Sana Amanat an outlier is a bit of an understatement. Sana, a Pakistani-American Muslim woman, often credits the X-Men with first inviting her into the world of comics. She identified with the series’ misfits and their experiences with discrimination. Her brother Irfan is the one who introduced her, fostering in her one of the most important requirements for a budding comics editor: Imagination. “He very much instilled in me the possibility of the fantastic," she says.

Of course, making it in the comics industry takes a lot more than fandom and an active mind, requiring one to acquire an unusual, highly technical hybrid of skills, which Sana says she never would have honed without modeling and support from inspiring leaders in her life. Though when she first started out, she was able to pick up a few freelance gigs, it wasn’t until she landed a job at the now-defunct indie publisher called Virgin Comics.

Once there, Sana forged what turned out to be perhaps the strongest mentor relationship of her career with MacKenzie Cadenhead. Both women eventually ended up editing together at Marvel, and it was MacKenzie, Sana says, who helped her hone the talents she would need to one day co-create her most famous character, Kamala Khan.

Otherwise known as Ms. Marvel, Kamala—deemed a “mighty Muslim” by The New York Times—is the superhero world’s first-ever Muslim Pakistani-American teenager, hailing (as Sana does) from New Jersey. It didn’t take long for the character to strike a chord, sky-rocketing to the No. 1 slot on Marvel’s digital sales chart soon after its release just over a year ago; the first issue has since gone into its seventh reprinting. And just last week, Marvel announced that Kamala would join the newest iteration of the Avengers next fall.

Though it would be a decade before Sana had developed the internals she’d need to come up with such a fresh and relatable character, MacKenzie remembers she immediately noticed Sana’s natural talent. Still, MacKenzie says Sana had some work to do before she could master her craft: “Comic book editing is a field you apprentice in. You don't really go to school for it.” So her approach with Sana was to start—as one must do with everything from learning how to read and write to driving a car or a new computer program—with the basics.

Or, as MacKenzie calls it, “the vocabulary for visual storytelling.”

Sana agrees that she had to be actively taught “the fundamentals of crafting a story in this type of medium.” Perhaps due to her childhood obsession with comics, Sana says she “responded to it immediately. There was something natural in the way comic book stories are told that [she] connected with." And once she grasped the form’s vocabulary, MacKenzie took Sana through the process of merging the written with the visual and then got “out of her way.”

Sana is grateful that she found a friend and a mentor in MacKenzie—someone who was willing to put in the time to show her the nuts and bolts of her craft. But the most important insight she gleaned from this mentorship was, as she puts it, realizing that there are "limitless ways in which to relay a story.” But it’s important to harness all those possibilities a singular vision. And often, that vision is a team effort between an editor, writer, and visual artist.

And yes, clearly Ms. Marvel resembles Sana in infinite ways. But even a near-autobiographical character was the product of one of those team efforts, drawn from brainstorming sessions with author G. Willow Wilson and then Marvel editor, now Vice President, Steve Wacker. Sana credits Steve with encouraging her chase after a career she "couldn't have imagined on her own," taking a chance on a young artist and supporting her as she developed her unique voice.

However, Sana is quick to point out that "developing your own editorial voice can take some time." She learned to trust her "unique sensibility" after years of patiently observing editors like MacKenzie and Steve. Sana has concluded that "skill set and style are two different things... In order for you to become a good editor who makes distinct books, you need to have both."

MacKenzie says that it wasn’t until Sana had mastered the vocabulary of comic book art as well as confidence in her own voice that she was able to recognize that her own story could be part of the Marvel universe. Sana says that in her work today as an editor, she attempts to bring out that unique voice in the artists and writers with whom she creates each issue, mirroring what MacKenzie did for her at the beginning of her career.

She "was the one person who gave me the confidence and encouragement to keep me going,” says Sana, “especially when others doubted me and when I doubted myself." MacKenzie says being a good mentor means to go beyond asking yourself, “Do you have the skills to guide someone [with natural talent]? It is also dependent on the other person being open [to you.]” MacKenzie describes Sana as being open to any constructive criticism and willing to use it to continuously learn and grow as an editor, writer, and artist—something that’s important for anyone learning a new skill.

Now that Marvel, one of the two largest forces in comics (the other being, of course, DC), has introduced a young, female, immigrant, Pakistani-American as the star of her own series, the future for the industry feels as limitless as Ms. Marvel’s powers. The character has exposed voracious young comic book readers—many of whom might struggle with their identities just as Sana once did—to a whole new kind of hero. And surely some will be inspired to become comics creators themselves, empowered by Sana’s revolutionary career to take the comics industry to soaring new heights of inclusivity and innovative storytelling.