So You Want To Be A Mermaid?

From Singapore to Phoenix, Ottawa to Marseilles, “mermaid school” has gone mainstream 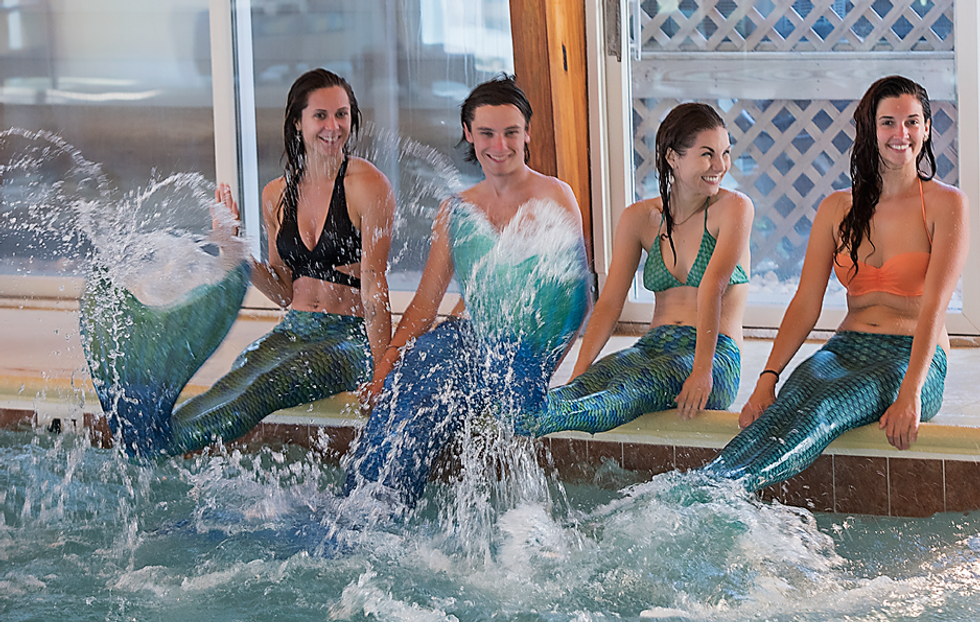 In January 2015, I traveled to Great Falls, Montana, to play guest mermaid for the night at a legendary tiki bar known as the Sip ‘n Dip. And while some folks might come for the drinks, it’s the mermaids that are the stuff of local lore. Appearing underwater through the glass-only back bar, the highly-skilled, tail-wearing swimmers wave to customers, flip through hula hoops, and blow the occasional kiss or two throughout the course of a night. It’s below-the-waves, fully-committed performance art that’s unlike anything out there.

At the time, it seemed like a one-off novelty: After all, how many people have the opportunity (or desire) to publicly pretend to be a sea princess? Little did I know that my quirky, half-fish, half-woman experience happened at just the moment mermaid culture—and the concept of “mermaid school”—was erupting into a certifiable international phenomenon.

[quote position="left" is_quote="true"]You don't know shame, failure, and the loss of dignity until you've done it in a mythical-creature costume.[/quote]

Over the past several years, mermaid schools have cropped up in just about every pocket of the globe as a place for people to live out their fantasy of being an honest-to-goodness ocean maiden. Often operated by former synchronized swimmers or stage performers with a watery bent, the classes are equal parts glamour and athleticism. At Singapore’s First Mermaid School, instructors start off class with a “mermaid syllabus” that reviews mythology and culture of the merm-iverse. The chain operation Aqua Mermaid offers instruction for kids and adults from Ottawa to Phoenix, Arizona. Classes usually range anywhere from $40-60 per hour, and all have a special mermaid bent whether you in enroll in Los Angeles, the Philippines, or coastal Spain. It’s definitely a lifestyle—if you want it to be.

“We’ve had entire families take lessons, from grandparents down to little kids,” says Brooke Rowe, a mermaid instructor at the Sanderling Resort’s Kitty Hawk Kites Mermaid School in North Carolina’s Outer Banks. The school officially opened its doors this year, and hour-long classes have booked up quickly throughout the summer. A ROGBIV of shiny, polyester-and-spandex tails are sold as part of the program’s education process: They’re technically sound enough to help a person move like a fish through water, but sparkly enough to appeal to everyone’s inner Lisa Frank obsessive. A great deal of time goes into teaching aspirational flipper-users how to properly care for their tail as if they are an actual, neon-hued appendage.

By last month, the global mermaid movement had swelled so mightily that the New York Times reported on France’s recent efforts to embrace the “American mermaid obsession” by opening its first mermaid school at a hotel in Marseille. The school even bestowed one superstar student with the title of Miss Mermaid France, and the chance to represent the country at the Miss Mermaid International contest this fall in Soma Bay, Egypt.

Outside of all the underwater acrobatics and pageantry, though, it’s crucial to note that the mermaid experience is not for the faint of heart (or ab muscles). At the mermaid academy in the Outer Banks, an arduous swimming test is required before students make their “mermaid transition”, and swimmers are reminded to not “attempt skills with the mermaid tail that you cannot do without a tail.” A reporter from VICE tried his hand at mermaid classes in Montreal and, by his own report, failed miserably.

“You don't know shame, failure, and the loss of dignity until you've done it in a mythical-creature costume,” he writes.

When I plunked down in that pool in Montana with my black, crushed velvet (yes, really) tail on, I immediately sank like an ungraceful anchor. There’s no doubt mermaid-ing is hard work.

But the real question that continues to baffle me is why so much interest in mermaids—and why now? Perhaps, for adults, it’s a means of returning to childlike roots; using age-old mythology in a hands-on way to (temporarily) forget about the world’s problems. Maybe this is simply the next big thing in LARPing, with folks eventually setting up entire mermaid colonies and schools, complete with conch shell-shaped cell phones and sea cucumber couches. Heck, people might just like The Little Mermaid a lot more than I thought.

All I know is that when the next big trend in mythological creature roleplaying comes around, let’s just all pray it’s not an obsession with harpies.