Man asks if he's in the wrong for feeding his vegan niece milk and cookies, internet digs in. 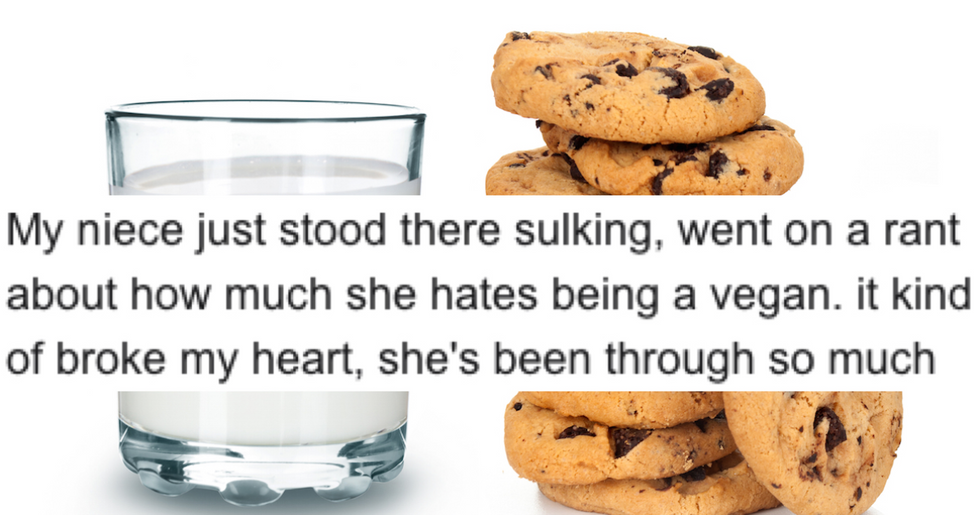 Look, there’s nothing wrong with being vegan. In fact, it’s great for the environment, and a lot of vegan food and beverages are delicious. I will absolutely spend five dollars on an oat milk latte, thank you very much.

The problem with vegans comes along when they try to shove their lifestyle down other people’s throats. Eat all the sunflower seed pancakes you want, just don’t make the rest of us have a bite if we don’t want to. And while you’re at it, please make sure being vegan isn’t your entire personality.

However, what happens when veganism meets motherhood? A mother is in charge of feeding her child, so is she, therefore, able to force a vegan diet on her kid? And is that a chill thing to do?

These questions came up in a Reddit thread after SpaceCowboy_82 asked if he was in the wrong for feeding his niece milk and cookies, despite the fact that his sister had her on a vegan diet.

About 8 months ago my sister decided she was going to flip hers and my niece’s life upside down. Not only was she leaving her husband, but she was also going vegan and forcing my ten-year-old niece to do the same.

Yesterday there was an emergency at my sister’s work which requires her to stay late. She asked me to pick up her daughter which was no problem because she goes to the same school as my kids.

When we got home my kids asked for milk and cookies my niece wanted some too. I remind my kids that their cousin was not allowed to have milk and cookies, so I offered to cut up some fresh strawberries and kiwis instead. My kids love fresh fruit so they decided on that with no protest.

My niece just stood there sulking, went on a rant about how much she hates being a vegan. it kind of broke my heart, she’s been through so much in the last few months, really how bad would a little cup of milk and a few Oreos really hurt her. So I decided to serve milk and cookies , my niece gave me the biggest hug ever and told me I was her favorite uncle.

When my sister came to pick up her daughter my six-year-old couldn't keep his mouth shut. She was absolutely livid with me, I told her to calm down, but she wouldn't. I told her she should try not to be so hard on her daughter because she’s been through so much lately. But she insisted that I tried to kill her daughter because I knew she was allergic to milk and gave it to her anyways. I quickly called bullshit on that and I reminded her that I have a video of her daughter eating cake and ice cream just last year on her birthday.

As you can imagine, people had some thoughts.

Some people felt the uncle didn’s do anything wrong, such as drekiaa, who wrote:

Unless your niece has a legitimate medical reason (or even arguably religious) for going vegan, I don’t feel that you need to obey your sister’s rules when your niece is adamantly against it.

griffinwalsh saw this as a parenting issue rather than a vegan issue:

I’m just wondering if you think this because its about being vegan or in general. Like if the mother had a no tv rule and she wanted to watch tv do you think its fine? What about no pg 13 movies? What about a rule about no processed sugars? I feel like all these rules are overbearing for a 10 year old.

To me undermining a parents rules for their child makes you an asshole. At the very least it would make me no longer trust you to take care of my child.

And drekiaa came right back with a response:

To me, it entirely depends on their reasoning.

Pushing your personal believes on a child, and said child opposes that belief, is not fair. Unless there is an actual religious, medical, or cognitive concern... I think there is some leeway. These are cookies.

PG-13 movies is an unreasonable example because at least here, the child is under 13. So that makes sense.

If a parent says, "I don't let my child watch TV because I hate TV." then that's not fair to the child. If it's because the child watches enough TV at their own home, and the parents want them to do something else at my house, then fair. I'll find something else for them to do.

Parents aren't perfect. And aunts/uncles have, in my opinion, some leeway. My family works this way, and it works for us. Maybe not for you, that's your dynamic.

Your sister is clearly being a pleb by forcing her child into a diet that she hates, clearly making her an A-hole

That being said, it’s not your child and you should still probably respect your sister’s decision to make her child go vegan. Shouldn’t have gone against that.

However, I do understand why you gave her the milk and cookies. Personally would’ve done the same, even though I know that wouldn’t be the correct thing to do from a moral stand-point

And CallieEnte was with the mom in some ways:

Sister definitely sucks for forcing her dietary choices on the kid, but OP doesn’t know if kid could have developed a sensitivity/intolerance to milk in the time she hasn’t consumed it. He could have jeopardized kid’s health.

Unless she’s malnourished, I err on the side of respecting someone’s parenting decisions. The kid can talk to her mom about what she wants to eat, and/or make her own food choices when she’s buying her own food.

Overall, people agreed that it was unfair for the mother to force a vegan diet on her child. But some recognized that as a mother, she has the right and responsibility to regulate her daughter’s diet. Others felt the kid should be given more freedom over her dietary choices, so long as they weren’t hurting her. Looks like this is the unsolved vegan case of 2019.