Romney is showing conservatives how to criticize Trump without abandoning their principles. 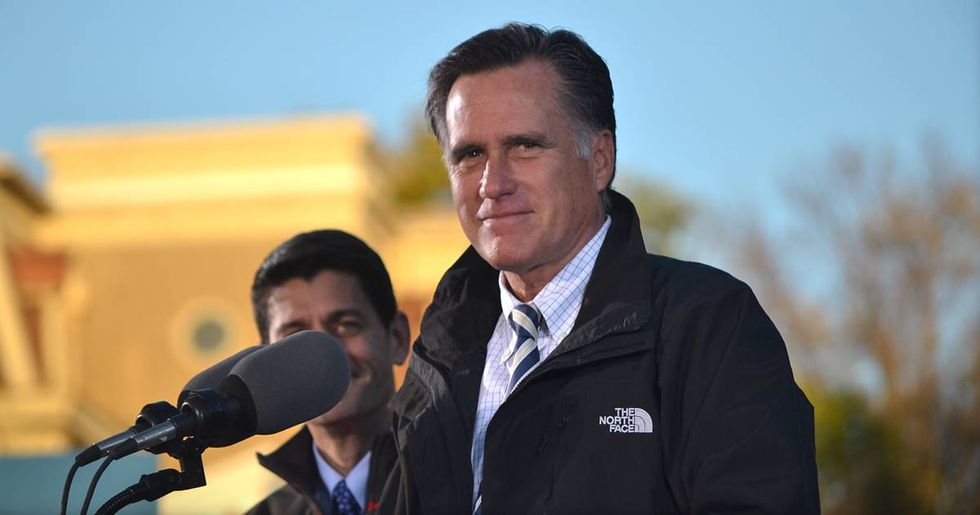 Three days before being sworn into Congress, Utah senator-elect Mitt Romney wrote a scathing rebuke of Donald Trump in the president’s least favorite newspaper, The Washington Post. In an op-ed published January 1, Romney chastised Trump for his character saying it “falls short” of the office.

Romney’s decision to criticize an incumbent president from his own party was a bold move at a time when Congressional Republicans have been reluctant to challenge the renegade president.

Over the past two years, the most vocal Republican anti-Trump voices in the senate have been those who weren’t seeking re-election. Most notably, Jeff Flake and John McCain, both of Arizona.

While Romney’s op-ed praises Trump for cutting taxes and passing criminal justice reform, he believes the president’s behavior has been unbecoming of the office. “On balance,” Romney wrote, “his conduct over the past two years, particularly his actions last month, is evidence that the president has not risen to the mantle of the office.”

To a great degree, a presidency shapes the public character of the nation. A president should unite us and inspire us to follow “our better angels.” A president should demonstrate the essential qualities of honesty and integrity, and elevate the national discourse with comity and mutual respect. As a nation, we have been blessed with presidents who have called on the greatness of the American spirit. With the nation so divided, resentful and angry, presidential leadership in qualities of character is indispensable. And it is in this province where the incumbent’s shortfall has been most glaring.

Romney was also critical of how Trump has either neglected America’s allies or treated them with hostility.

The world is also watching. America has long been looked to for leadership. Our economic and military strength was part of that, of course, but our enduring commitment to principled conduct in foreign relations, and to the rights of all people to freedom and equal justice, was even more esteemed. Trump’s words and actions have caused dismay around the world.

Romney ended his op-ed on a positive note, outlining a path to repair America’s image abroad and heal its fractured political landscape at home.

To reassume our leadership in world politics, we must repair failings in our politics at home. That project begins, of course, with the highest office once again acting to inspire and unite us. It includes political parties promoting policies that strengthen us rather than promote tribalism by exploiting fear and resentment. Our leaders must defend our vital institutions despite their inevitable failings: a free press, the rule of law, strong churches, and responsible corporations and unions.

Trump proved Romney right with an immature response on Twitter, calling out the senator-elect for losing in the 2012 presidential election.

Here we go with Mitt Romney, but so fast! Question will be, is he a Flake? I hope not. Would much prefer that Mitt focus on Border Security and so many other things where he can be helpful. I won big, and he didn’t. He should be happy for all Republicans. Be a TEAM player & WIN!

While Romney’s op-ed was a brave decision, it’s been met with its share of cynicism. Romney peviously called out Trump in 2016 only to meet with him after the election about a cabinet position.

Romney also has a long history with flip-flopping on major issues such as the Affordable Healthcare Act, abortion, and assault rifles.

Mitt Romney, who would have happily changed his spots to act as Trump's Secretary of State, now flip-flops again, back to bashing Trump in the media. My bet? He's fixing to primary Trump in 2020. #WednesdayWisdomhttps://t.co/U0cUkW1uLe

The only mantle Mitt Romney might seize is being the Biggest Fake in American Politics: https://t.co/3lkwXvTcPXpic.twitter.com/WBZb0vLRVW

Hey, remember when Mitt Romney traveled to Trump Tower in 2012 to kiss Donald Trump's ring because he needed the King Birther's support?

He's always been and always will be a craven political opportunist.

Mitt Romney, owner of a dancing horse, is an out-of-touch, unfeeling vulture-capitalist plutocrat who strapped a dog to the roof of his car and thinks that 47% of Americans are moochers, and only a vile, barrel-bottom skunk like Trump can make him seem statesmanlike by comparison